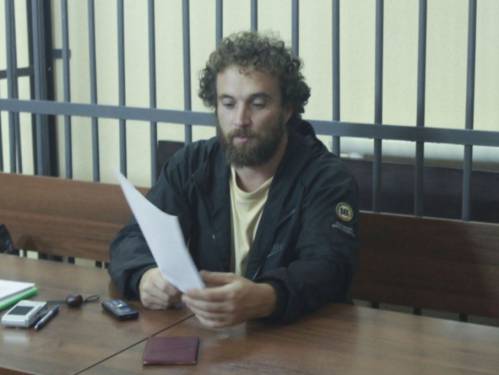 It seems any pretext will do in Russian-occupied Crimea to prosecute civic activists, with lack of jurisdiction to prosecute openly ignored by both de facto prosecutor and the courts.  On Sept. 20, judge Yelena Toshina fined Alexei Shestakovych 1, 000 roubles for a video he reposted 4 years before Russia invaded and occupied Crimea.  On the same day, another court in Simferopol rejected his appeal against a 20-thousand rouble fine for a totally peaceful picket in defence of political prisoners.  Shestakovych’s lawyer Alexander Popkov has pointed to huge irregularities in the proceedings, and sees the prosecution as aimed at silencing the few activists taking a civic stand, especially against political persecution.

As reported, Shestakovych was detained back in July for organizing a small picket calling for the release of Ukrainian filmmaker Oleg Sentsov, civic activist Oleksandr Kolchenko and others.  A protocol was drawn up, accusing him of ‘infringing the rules on holding a public gathering” although the video here shows how the young men were simply standing in a row with placards in defence of political prisoners.  The police appeared and demanded to see their ‘permit’.  The protesters were outnumbered by the police, and the only heavy-handed measure was the administrative protocol against Shestakovych.  This resulted in the 20-thousand rouble fine which has now been upheld. 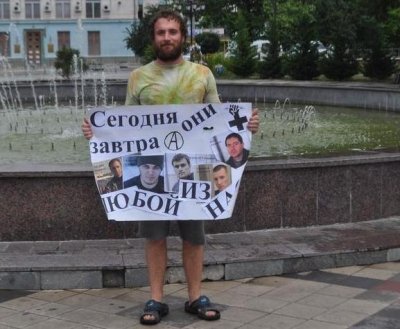 In support of political prisoners Oleg Sentsov, Oleksandr Kolchenko and others  - the placard warns: Today it’s them, tomorrow any one of  us

The first ruling, after a hearing lasting seven hours on Sept 20 is even more disturbing in its open lawlessness.

Shestakovych had notified his intention of holding a picket of the FSB on Sept. 20.  Two days earlier, on the day of the elections, he was stopped by four men in plain clothes, one of whom produced police ID.  They demanded to see his identification, and when Shestakovych showed his passport, they took him away, purportedly for a narcotics test.

He was taken to the so-called ‘Centre for Countering Extremism’ where they began drawing up an administrative protocol over his posting of a video in 2010 on the social network VKontakte.  The video has since apparently been found to be ‘extremist’ by a Russian court in Russia.

There was, Shestakovych writes, “an informal part” to his communication with the officers.  They made it quite clear that graffiti had appeared around Simferopol calling on people to boycott the elections. As reported here, such calls were also made and heeded by Crimean Tatars. Russia had no right to be holding them in occupied Crimea and most western countries have already confirmed that they will not recognize them.

The officers threatened to carry out a search, saying that the graffiti template “would be found”.  They kept him detained for a long time, taking quite unnecessary breath and urine tests, before finally letting him go, saying that this was only because they had lots on because of the elections.

Russian activist Yana Goncharova reports that one of the ‘anti-extremist centre’ officers did say during the hearing that he believed Shestakovych to be involved in a left-wing radical movement and to have posted the graffiti calling for a boycott.

That was marginally less surreal than the other charge since it at least pertained to action under Russian occupation, not four years before Russia’s invasion.  It was, however, unproven.

The number of procedural irregularities was quite staggering.  At the beginning of the hearing, the judge rejected the application for permission to video it. She claimed there were no provisions for this, challenging the lawyer to quote the norm of the law allowing such recording.  Popkov promptly obliged, by quoting the relevant decision of the Russian Supreme Court.  Toshina rejected the application anyway.

The protocol for the examination of the ‘offending material’ had no name on it at all.  When Popkov noted this, a person from the ‘counter-extremism’ unit said that he’d drawn it up which the court accepted. Toshina did withdraw to deliberate for a few moments after being confronted with records showing that one of the official witnesses had begun providing his report before the alleged offence was noticed.  She returned, saying that such ‘small discrepancies’ could be dealt with during the hearing.

Worse was to come since the officer had given one date, but the document gave another. The judge even considered agreeing to call in the witnesses, only to reject the application when it proved impossible to do this the next day.

A court under Russian occupation has now openly prosecuted a Ukrainian national for posting a video, quite legally in accordance with Ukrainian law in Ukrainian Crimea in 2010.

Having flouted international law by invading and annexing Crimea, Russia is continuing to demonstrate contempt for fundamental principles of law and its own criminal code which directly prohibits such insane prosecutions.