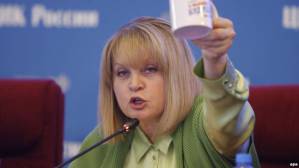 “We will change a lot, and radically, in the way the Central Election Commission operates. A lot and radically -- this is something I can promise you, ” she said at the time.

However, a statistical analysis of the official preliminary results of the country’s September 18 State Duma elections points to a familiar story: massive fraud in favor of the ruling United Russia party comparable to what independent analysts found in 2007 and 2011.

“The results of the current Duma elections were falsified on the same level as the Duma and presidential elections of 2011, 2008, and 2007,  the most falsified elections in post-Soviet history, as far as we can tell, ” physicist and data analyst Sergei Shpilkin told RFE/RL’s Russian Service. “By my estimate, the scope of the falsification in favor of United Russia in these elections amounted to approximately 12 million votes.”

According to the CEC’s preliminary results, official turnout for the election was 48 percent, and United Russia polled 54.2 percent of the party-list vote -- about 28, 272, 000 votes. That total gave United Russia 140 of the 225 party-list seats available in the Duma. In addition, United Russia candidates won 203 of the 225 contests in single-mandate districts, giving the party an expected total of 343 deputies in the 450-seat house.

Shpilkin, who in 2012 won the independent PolitProsvet award for political analysis for his statistical work on the 2011 vote,  posted his examination of the latest election on his blog on September 19.

Using data from the Central Election Commission’s website, Shpilkin organized all 95, 800 polling stations on a graph according to the turnout that they reported.

In fair elections, the graph would form a bell curve, with its peak indicating the average turnout for the entire election. Reading from left to right, Shpilkin’s graph shows a relatively normal bell curve that peaks at about 36 percent turnout and then, as it moves right, shows a jagged curve that dips unevenly and then begins rising again, as vast numbers of polling stations begin reporting turnouts of 70 percent or more.

“The easiest form of falsification in terms of cost and intellectual effort on the part of the falsifiers is simply to add votes in favor of the desired party or candidate, ” Shpilkin explained. “But adding votes means that the turnout changes in an upward direction from the typical distribution. ... A peculiar characteristic of these elections is that we don’t see the transfer of votes from one party to another. Perhaps this is a sign of the good influence of Ella Pamfilova.”

In addition, Shpilkin’s graph is spiked because there were an improbable number of polling stations at the high end of the turnout scale reporting round-number turnouts ending in 5 or 0, such as 75, 80, or 85 percent. This is a phenomenon Shpilkin and other analysts noted in previous elections and dubbed “Churov’s saw, ” after former CEC head Vladimir Churov.


In 2008, Shpilkin estimated that United Russia actually won 277 seats in the Duma instead of the constitutional majority of 315 that it was awarded.

This time around, it is somewhat more difficult to tell how the alleged falsification might have influenced the results because half of the Duma was elected from single-mandate districts, from which United Russia got a majority of its deputies. Shpilkin estimates United Russia actually got about 40 percent of the party-list vote, which would have reduced its party-list seats from 140 to around 110.

But, with a projected 343 deputies in the new parliament, United Russia once again has enough votes to unilaterally alter the constitution.

Although Pamfilova has promised to investigate reports of fraud and election officials have already annulled results in at least three polling stations, she maintains that there was no systematic falsification and that the vote was legitimate. On September 20, Russia’s Prosecutor-General’s Office denied there were any significant violations during the voting and said the number of complaints was “significantly lower” than for previous elections.

But videos recorded by official cameras from several polling stations seem to tell a different story. In almost all of them, local election officials can be seen working as teams to apparently stuff ballot boxes and prevent outsiders from observing their actions.

Pamfilova has said that such videos do not constitute proof of fraud and, Shpilkin recalls, courts rejected dozens of fraud cases based on similar videos in 2012.

Shpilkin hopes his analysis will help Pamfilova come to grips with what he sees as massive fraud embedded in Russia’s election system from the ground up.

“I am not entirely sure that Ella Pamfilova has a good understanding of the actions of the heads of polling stations on the ground, how they compile their protocols, how they fill in the data and submit it to their regional election commissions, ” Shpilkin said. “Moreover, she most likely does not understand how the results are aggregated and how many votes were added in for those 96, 000 polling stations.”

Shpilkin emphasizes that his analysis does not mean that the genuine opposition parties that did not get seats in the Duma would have, if not for the alleged falsification.

“It is possible that some changes might have been seen on the local level in places like Moscow and St. Petersburg on the level of single-mandate districts, ” he said. “But on the level of federal party lists, the position of the opposition looks entirely hopeless.”