How could Ukraine forcibly return a Maidan activist to Russia? 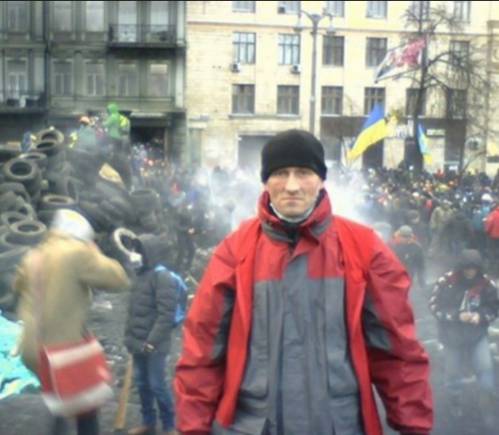 Sergei Anisiforov has just had the latest application for asylum rejected by the Ukrainian Migration Service whose grounds have baffled successive courts and who appear, quite incredibly, to be still collaborating with the Russian authorities.

Reform is always a painful process, however Ukraine’s Migration Service is carrying resistance to extremes.  It appears oblivious to all the grounds, including Russia’s politically motivated trials of Ukrainians, why collaboration with its Russian counterparts is unacceptable, and why critics of the current regime in Russia must not be sent back.

Sergei Anisiforov took part in Euromaidan effectively from the outset.  He had been living in Odesa and set off for Kyiv in outrage at the violent dispersal of students on Nov 30, 2013.  He stayed, as part of the Odesa Udar Party tent group.  He was injured in January 2014, and has since been awarded a medal by the Ukrainian Orthodox Church of the Kyiv Patriarchate  for his commitment and his love of Ukraine.

The 44-year-old is a Russian national almost by chance, since he lived in Soviet Ukraine until the breakup of the USSR.  He opposed Russia’s annexation of Crimea and military aggression, and would have helped to defend Donbas, but for a serious back problem.  His opposition has led to the few relatives he has back in Russia totally turning against him.  It has also elicited a constant stream of threats.  Most worryingly, he has been placed on an effective hit list posted on a Kremlin-backed militant website with the ominous title: Tribunal: Retribution is coming [Трибунал: Возмездие настанет].

This month the Ukrainian Migration Service’s rejected his application for refugee status for the third time.  Most applications for asylum in Ukraine are in fact rejected but the grounds cited by the Odesa Migration Service where Russian asylum-seekers are concerned, seem exceptionally cynical. In the case of another strong critic of the current Russian regime, Pyotr Lubchenkov, an official literately quoted Russia’s Constitution, which prohibits politically motivated prosecution as ‘proof’ that any fears of persecution are groundless.  The woman (19 minutes into the video here) explained that she, as an official, can only refer to the law. “In Russia, there is no torture, no inhuman treatment, it’s not officially established anywhere”.

In Anisiforov’s case, officials argue that he cannot prove that criminal proceedings have been lodged against him over his involvement in Euromaidan.  The logic is extraordinary.  He should presumably return to Russia and check, and if he faces persecution, then Ukraine will consider his application for asylum. It might just grant it, but that will hardly help him if Russia has, by then, arrested him.

There is nothing abstract about the danger. Anisiforov’s legal representatives have cited the cases of a number of political prisoners, including two former Maidan activists – Oleksandr Kostenko and Andriy Kolomiyets.  They have been sentenced by a ‘court’ in Russian-occupied Crimea to long terms of imprisonment on surreal charges linked with Euromaidan.  Kolomiyets was even taken by force from Russia, where he had been living with his partner and her children, and charged with ‘attempted murder’ of two former Ukrainian Berkut riot police officers in January 2014.  Neither Kolomiyets, nor his supposed ‘victims’, was Russian and the alleged throwing of a Molotov cocktail took place in the capital of Ukraine months two months before Russia annexed Crimea. The two officers claimed to have ‘experienced pain’.  They had not reported anything at the time, and the suggestion that two years later they could identify Kolomiyets as causing this ‘pain’ is absurd.  None of this stopped Kolomiyets getting a 10-year sentence.

The list of Russian nationals who have been imprisoned for posts on social networks condemning Russia’s aggression against Ukraine is also high.

After growing up in a children’s home and a troubled youth, which resulted in two prison sentences, Anisiforov ended up being noticed as a potential actor.  He became fairly well-known for roles in TV serials, where he invariably played either criminals or police officers.  His opposition to Russia’s current regime and especially to the invasion of Crimea will have certainly not gone unnoticed by the Russian authorities.  As mentioned, he also has legitimate grounds for fearing for his life, with this directly linked with his support for Ukraine.

Grigory Frolov from the Free Russia Foundation gives telling examples of the kind of mentality demonstrated by the migration service officers. A document signed by Ukrainian officials from August 2015 was read out in court.  This asserted that the case of Crimean filmmaker Oleg Sentsov and Oleksandr Kolchenko was not relevant since they were members of Right Sector, a Ukrainian nationalist organization banned in Russia, while Anisiforov does not belong to any such group.

Neither did Sentsov and Kolchenko.  They were sentenced to monstrously long terms of imprisonment two weeks after that document was issued, despite the lack of any evidence in a trial condemned by all democratic countries.

This was not the only time that officials had simply repeated verbatim information received from Russian officials quite likely implicated in politically motivated prosecutions. Lyubchenko has posted copies of numerous such documents which show direct collaboration between Ukrainian officials and the FSB.  Alexei Vetrov, another opponent of the regime in Russia who came to Ukraine because of Maidan, has also found that the Ukrainian authorities unquestioningly accept that if the Russian investigators say that a person was guilty of ‘hooliganism’, then that is what the person was up to.  “The Ukrainian authorities do not believe it possible to disbelieve the Russian government”, he commented drily.

The one cheering thing is that the courts in Ukraine have reacted impeccably.  On Feb 9, 2016, the Odesa Administrative Court of Appeal upheld an earlier ruling cancelling the Migration Service’s rejection of Anisiforov’s application and ordering it to reconsider his case.

It cited both international documents protecting the rights of refugees and Ukraine’s legislation.  It notes, for example, that Article 13 of Ukraine’s Law on Refugees  specifically refers to people who have come to Ukraine or who need to remain in Ukraine due to legitimate fears if returned.  One of the possible reasons is because of “systematic rights violations”.

It is hardly sufficient to quote Russia’s Constitution when there is direct evidence of systematic violations of the rights of Ukrainian nationals held illegally in Russia, as well as of Russians. Denial of this is particularly absurd given that some of the victims of such abuses are imprisoned because of their involvement in Maidan or their opposition to Russia’s invasion of Crimea.

There does not appear to have been any real reform of either the Security Service [SBU] or the Migration Service, as the SBU’s recent abduction and forcible deportation to Russia of Amina Babaeva and the constant rejection of warranted asylum requests demonstrate.

Anisiforov should have long been granted asylum in Ukraine.  It is telling both that his case is being run by one of the partners of the UN High Commission for Refugees, and that the above-mentioned court ruling is just one of six where the courts have found against the State Migration Service.