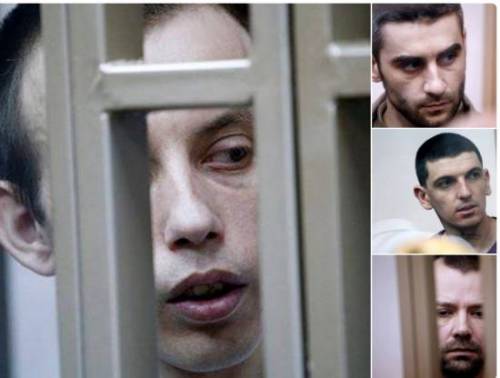 The convictions of four Crimean Tatars sentenced to 5-7 years in a case condemned by human rights groups have not only been challenged by the defence.  It seems the de facto prosecutor is planning, at appeal against the  requalification of the charges with respect to Ruslan Zeitullayev, and his 7-year sentence.  There are absolutely no grounds, but the case now looks bad for the prosecutor, since even the court in Rostov could not ignore the lack of any evidence to back the charges and passed the minimum sentences possible.

The four men – Zeitullayev; Ferat Saifullayev; Rustem Vaitov and Nuri Primov - are the first of 14 Crimean Muslims, almost all Crimean Tatar, now in custody and facing identical charges. These were of organization or involvement in the Hizb ut-Tahrir movement which Russia has banned as ‘terrorist’ without providing any evidence to back this.  The charges are regularly used to imprison Muslims in the Russian Federation, with the sentences often very long.  Russia has now begun such prosecutions in occupied Crimea, with these especially shocking given that the movement is entirely legal in Ukraine.

There were other differences in this case.  The men had proper lawyers defending them, and on this occasion the renowned Memorial Human Rights Centre did not wait until the sentences were passed to declare all four men political prisoners.  Memorial consistently condemns such prosecutions in Russia, but here the situation is particularly brazen since the Crimeans have been prosecuted on land which Russia is illegally occupying and for something which is legal in Ukraine.

The gross irregularities in the prosecution’s case and in the court hearings may, in fact, be how Russia always runs such cases, but this time they were seen and challenged.

Emil Kurbedinov was quite illegally prevented from defending all four men, and represented only Zeitullayev.  He has spoken from the outset of the pressure put even on people coming to the detention hearings, let alone on so-called prosecution witnesses, almost all of whom denied or retracted testimony which they were claimed to have given earlier.  The prosecution was left with 3-4 witnesses, all of whom were known to have personal reasons for being against two of the men, including over a law suit defending land which the two had won for their community.

Kurbedinov has now also revealed more information about the ‘secret witness’ who gave testimony against the men under conditions suggesting that somebody was sitting with him in the room, telling him what to say.  Even then the testimony was still extremely vague and contradictory, and the reason is now clear.  Attempts to (illegally) distort the man’s voice could not conceal his strong Arab accent.  The person had himself initiated a meeting with the men, and asked ‘provocative questions’ which he illicitly taped and, clearly, passed immediately to the FSB.  That was the only contact with the men, and even that came up with nothing more ‘incriminating’ than chat around a kitchen table about an ideal world order or similar.

With absolutely nothing more against the men, the judge did not have the courage to acquit them but did the next best thing.  The charges against Zeitullayev were changed from ‘organizing a terrorist cell’ to be involved in it, with the 31-year-old father of three ‘only’ sentenced to 7 years.  The prosecutor had demanded 17.  The other three men were sentenced to 5 years, also the minimum possible under the charge.  All four men came to that last hearing with T-shirts spelling out the nature of the trial [‘Banned again’; Crimean Tatars; Order carried out as commissioned; The show is over’] and stood with their mouths taped in protest.

Now Refat Saifullayev, father of one of the men, has reported that the prosecutor is unhappy with the sentences.  The prosecution story now seems unconvincing: there is an organization, those who carried things out, but no organizer.

There was no organizer, no terrorist cell and no men involved in it, but that, unfortunately, did not stop ‘prosecutors’ in Russian-occupied Crimea sending this case to the court.  It is now no obstacle to trying to get a person who has done nothing imprisoned for up to 17 years.