Babyn Yar and Remembrance beyond the AnniversaryLatest and worst anti-Semitic vandalism at Babi YarFoul Desecration of Monument at Babyn YarIsraeli ambassador sees no particular problem with anti-Semitism in UkraineG20 Putin Pack: Russia’s Fascist ‘Anti-Fascist’ CrusadeRussian "Right Sector War against Odesa Jews” DebunkedComparison of xenophobia in Ukraine and in RussiaPro-Russian separatists start their own anti-Semitic TV channelPro-Russian, anti-Roma, anti-Semitic and hunting out Ukrainian speakersThe Donetsk anti-Semitic leaflets – what should not be overlookedEast Ukraine crisis and the ’fascist’ matrixRussia continues its false narrative as defender of oppressed minorities in UkraineRussian propaganda claims Jewish organizations supporting Maidan are bringing on "second Holocaust"The Crimean referendum’s neo-Nazi observersPutin’s Neo-Nazi HelpersChief Rabbi and others dismiss Putin’s “anti-Semitic extremist” claimsRussian propaganda must be challengedWestern Media: Don’t distort the situation in Ukraine!Russia’s aggression poses dangers beyond Ukraine’s bordersCrimea: Anti-Semitic card and other provocation in time of siege
• Topics / We remember 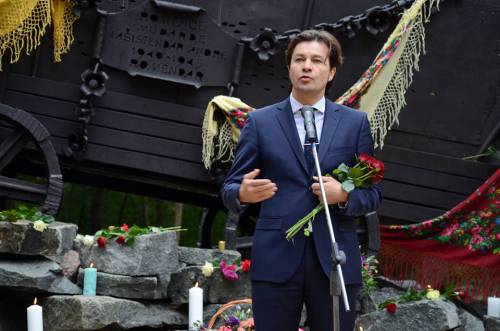 As the 75th anniversary approaches of the massacre of 33 thousand Ukrainian Jews at Babyn Yar, Ukraine’s religious leaders have joined in a memorial service for the Nazis’ Roma victims killed at what was then a ravine on the outskirts of Kyiv.  The memorial finally erected to the residents of 5 Roma settlements who were murdered at Babyn Yar is in the form of a Roma wagon. 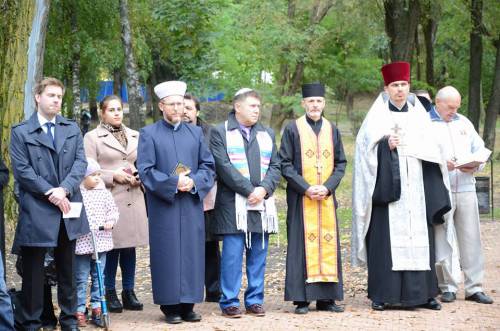 It was formally blessed on Sept 23 by Father Dmytro Karan from the Ukrainian Autocephalous Orthodox Church and Father Kostyantin Pantelei from the Ukrainian Greek Catholic Church who led the panakhyda, or remembrance service.  Prayers were also read by Chief Rabbi Oleksandr Dukhovny from the Religious Association of Progressive Judaism Communities of Ukraine and Said Ismagilov, Mufti of the Spiritual Directorate of Muslims of Ukraine.

The memorial was first planned in the 1990s and has, unfortunately, taken a long time to be erected due to differing views about where it should stand.  The decision was finally taken this year by Ukraine’s Ministry of Culture, and the symbolic wagon memorial erected.  It will stand not very far from the Menorah