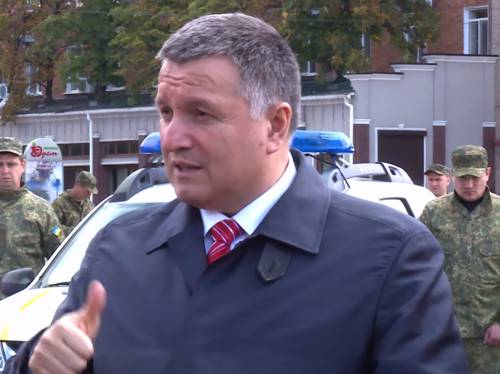 Vostok-SOS and other civic organizations have reacted with anger to remarks made on Friday by Arsen Avakov, Ukraine’s Interior Minister regarding Ukrainians displaced by the fighting in Donbas.  Avakov’s terminology was wrong, and he provided no evidence for the allegations he was making.

In talking about a new bill aimed at differentiating between crimes and minor misdemeanours, Avakov mentioned a recent increase in crimes.

Naming four factors for the increase in crime, he mentions “migration processes” and, on both the video and website, there is talk of “refugee-migrants”.  The site directly quotes him as saying: “Over the years of war around a million refugee migrants have come to Kyiv from Donbas.  Throughout the entire country between 2 and 3 million people are creating certain problems.  This is hard to monitor in statistics”.

Only the first sentence, without Donbas, can be heard on the video.  It is not surprising that a decision was made to edit what he said, namely: “Crime has risen sharply in Kyiv because around 800 [sic] refugee-migrants have come to Kyiv”.  The written version is being widely quoted, and there has been no retraction from the Minister,   so it seems safe to assume that he stands by both the words spoken, and those attributed to him.

Civic organizations are appalled.  They slam the use of the term ‘refugees-migrants’ with respect to people from Donbas who were forced to flee from their homes by Russia’s aggression and the armed conflict.  The Minister’s failure to refer to these people as internally displaced persons is either a sign of his lack of professionalism and legal illiteracy,   or a failure to understand the nature of displacement and the overall consequences of the conflict.

People displaced by the conflict cannot be refugees in their own country.  Unless, of course, Avakov was suggesting that Donbas is not part of Ukraine, they add.

Avakov publicly accused people forced from their homes of being responsible for a worsening in the crime situation, while not actually providing any evidence of a cause and effect link.

They believe that creating an artificial division between different Ukrainian nationals, depending on where they are registered as resident must be considered hate speech and is entirely inadmissible in the case of any public official, let alone one of his rank.

The civic activists, some of whom are themselves from Donbas, point out that the address, at least in the form presented on the site, is manipulative with figures.  In July 2016, according to the Department of Social Policy, there were 138, 566 internally displaced persons [IDP], which is far less than the figure given by the Minister.  The figure given by the Ministry for Social Policy for all of the country was just over 1.7 million as of Sept 19. 2016.

In speaking to the press, Avakov mentioned four factors behind the crime increase, in the following order: socio-economic issues; “refugee-migrants”; an influx of weapons as a result of the conflict in Donbas; police reform.   On the website, only the so-called ‘migration processes’ were mentioned, and elaborated upon.

The civic organizations point out that the main reason for an increase in crime is the socio-economic crisis which has intensified, with the military conflict as one reason.  They state that neither internally displaced persons, nor refugees can be the reason, and point out that the statistics kept by the Prosecutor General’s Office do not specifically identify the number or types of crimes committed by IDP.  It is extremely doubtful that the National Police or the Interior Ministry are separately recording crimes committed by people displaced from Donbas. Avakov’s statement is unlikely to have been based on hard facts.

It is to be regretted, they say, that at a difficult time, instead of organizing his ministry’s work, Avakov is spreading hate speech. This, they stress, can only further fuel animosity and unlawful actions against internally displaced persons.

Such unsubstantiated assertions only divide Ukrainians and, by effectively viewing IDP as potential criminals, they increase tension between internally displaced persons and the communities who have received them.

As reported here, Ukraine’s government has been pitifully slow in passing legislation to guarantee IDP their fundamental rights, and people do not have it easy.

It is statements like the Minister’s that increase the difficulties IDPs encounter, with people not wanting to let them apartments or give them a loan, etc.

They demand that Avakov either provides proof to back his assertions, or those posted on the official ministry website, or issues a retraction.

The statement has been endorsed by a number of civic organizations, including those involved with monitoring police work on the one hand, and racism and xenophobia on the other.