Invaders stage fake referendum so they can accuse Ukraine of ‘invading Russia’ “I don’t want to see them in the dock. I want to see them dead,” a man from the Mariupol Drama Theatre2,500 kms on Foot to Protest against the War. Anti-war Activities in Russia, 17-26 July 2022How are Russia’s missile strikes on civilians in Vinnytsia and Chasiv Yar not terrorism? ‘People flew in the air like leaves — there was such a strong explosion’Russia deports Ukrainians to occupied Donbas, forcing them to fight its war against Ukraine ‘The bodies were lying in the street. Broken. Pieces. Blood...’ ‘Back in the day Shoygu and I saved Neftegorsk after an earthquake and now he turns Mariupol into it’Romani Voices From Hell: Discrimination, Epidemic, WarRussian invaders create “real concentration camp” to torture Ukrainian prisoners in Kharkiv oblast ‘I washed and buried my brother riddled with shrapnel, and his bloodied and wounded mother was barely in time for the burial…’‘I saw fire arrows flying from Kherson...’‘... I sang in the basement to calm my daughter down’Charred bodies of Russian invaders" torture victims found in Kharkiv oblastOn documenting international crimes committed by the Russian occupiersRussians bomb tracks but fail to prevent evacuation trains carrying civilians fleeing from Donbas Summary of events that took place in Kharkiv and Kharkiv region during the first 30 days of the full-scale Russian-Ukrainian war (February 24 – March 25, 2022)«Юліна мрія»: МІТ започаткував безплатну освітню програму в пам’ять про загиблу харківську волонтеркуUkrainians block "deliveries of death" from Poland to Belarus and Russia, demanding the EU stops trading with killersGeneralization of the information about the events in Kharkiv and Kharkiv region during the Russia-Ukraine war for the period February 24 – March 5, 2022
• Topics / Civic society 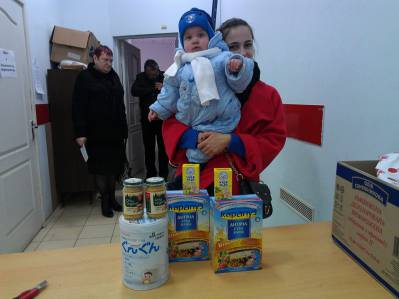 The two-storey building at 25 Dmytrivska Street provides working space for 70 volunteers, and rooms for IDPs education, training, and psychological counselling.

It could have to be surrendered from January 1, 2017, the head of the organization, Yulia Konotoptseva,  said on Friday.

The organizaton was established to provide social services to IDPs in May 2014. It last year received an award for its work fromRefugees International. From this year, it has also taken over responsibility from public bodies for the provision of a range of essential services to the wider population in need and opened 4 branches in Kharkiv region – in Izyum, Balakliya, Barvenkovo and Kupyansk.

The NGO co-founder Yulia Pimenova this morning told KhO that the organization had applied for support to Kharkiv’s city and regional authorities and was awaiting their decisions. She said that the organization expected to be informed within two weeks as to whether or not its requests for public funds had been successful, after which, if they had not, it would begin looking for other option.

Meanwhile another charity, Adaptation Cultural Center (ACCentre), which provides physiological, educational and financial assistance to IDPs, is also facing eviction from its offices on November 1st because it cannot cover its 13, 000 hryvnia ($500) monthly rent bill.

“The problem is that the policy of international funds is to help the organization to get established and [become] mostly independent, and then state organizations should ‘pick it up’ financially, meaning rent and other expenses. But in our case, the state only picks up something that’s profitable for itself”, said the head of the organization, Zhenya Diss (Eugenia Levinshtein).