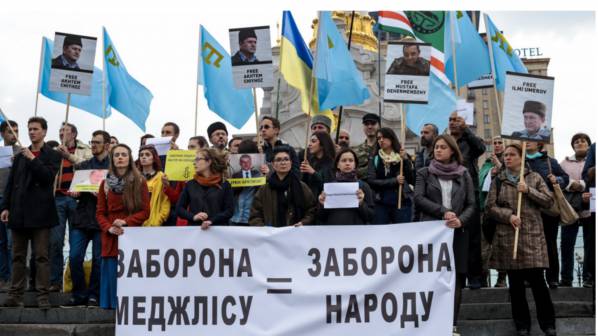 Russia has formally banned the Mejlis, or self-governing body of the Crimean Tatars, the main indigenous people of Crimea. An escalation in repression seems inevitable, with a number of Mejlis leaders in immediate danger.

The Russian Supreme Court hearing took place on Sept 29 amid protests in Ukraine and abroad.  One of the banners in Kyiv read: ‘A ban on the Mejlis is a ban on the Crimean Tatar people’.  That ban has just been upheld and is now legally in force in Russia, and – illegally – in Russian-occupied Crimea. The next step from the legal point of view is the European Court of Human Rights, however this could take years.  The next illegal move is Russia’s and could involve new arrests.

Although the formal ruling banning the Mejlis was on April 26, repressive measures began shortly after Russia’s forced annexation of Crimea.  The Mejlis had called on all Crimean Tatars and other Ukrainians to boycott the pseudo-referendum with which Russia attempted to give legitimacy to its land-grab.  Veteran Crimean Tatar leader and former Mejlis leader Mustafa Dzhemiliev was banned from his homeland in April 2014, with a ban on the current Mejlis Head Refat Chubarov following in July that year.

The offensive against the Mejlis itself intensified in September 2014, after the Mejlis again called for a boycott of equally fraudulent ‘elections’.  Since then, one Mejlis leader Akhtem Chiygoz has been arrested on surreal charges and is in effectively indefinite detention and another – Ilmi Umerov – is also facing a 5-year prison sentence for saying that “Russia should be made to leave Crimea and Donbas”.

Russia has, in the meantime, wooed certain Crimean Tatars and organizations willing to collaborate with the occupation regime. Like in Soviet times, they are pulled out for formal occasions as ‘proof’ that all is well in the occupied peninsula.

It is not, and the ban on the Mejlis has been rightly referred to as an act of war against the entire Crimean Tatar people.  How far-reaching the actual ban will be is unclear.  There are local mejlis throughout Crimea, and it was never fully explained whether these autonomous bodies would fall under the ban or not. If so, then over 2 thousand people could be in danger.

The Crimean Tatar Mejlis is made up of 33 members. These are selected by a representative body – the Qurultay – elected by all Crimean Tatars.  While there are certainly some organizations that have, over the years, stood in opposition to the Mejlis, the vast majority of Crimean Tatars have always supported it.  This has increased now, under Russian occupation, with the Mejlis seen as a symbol of Crimean Tatar identity.

Russia’s attempts to undermine its authority should be viewed against the position and respect that the Mejlis holds internationally. In a recent resolution, the European Parliament called it “the legitimate representation of the Crimean Tatar community”.

Russia’s attempts to treat the Mejlis as a ‘civic organization’ are even in conflict with  Russian legislation.  They are also on a collision course with the facts.  During the hearing on Thursday, Vladimir Churkin, de facto senior Crimean prosecutor, claimed that from annexation “active measures had been taken by the Mejlis leadership to destabilize the socio-political situation in Crimea, to provoke ethnic nationalism and extremism in Russian society, to stir up protest and mass unrest”.

The example cited in highly distorted fashion was the demonstration on Feb 26, 2014 over which Chiygoz is facing charges.  The assertions were factually wrong, but also demonstrate the same legal nihilism that Russia has demonstrated from the outset with Crimea.  This was a pre-annexation demonstration over which Russia has no jurisdiction.

It was, however, that demonstration which foiled the plan to make the annexation look like a voluntary action by the Crimean parliament and forced Russia’s hand  In less than 12 hours, heavily armed Russian soldiers had seized control.

With supreme cynicism, the Mejlis was accused of action “directed against Russia’s territorial integrity and which presents a threat to the security of the state and society”.

‘Arguments’ presented earlier included the allegedly ‘extremist’ nature of Refat Chubarov’s statements about the need to return Crimea to Ukraine.

This is indeed the stand taken by Mustafa Dzhemiliev, Refat Chubarov, Ilmi Umerov and others.  It is also the position of all democratic countries and that clearly articulated in the UN General Assembly’s Resolution № 68/262 of March 27, 2014.

Memorial also notes that Chubarov’s remarks were made in Kyiv, over which Russia has no jurisdiction.  The argument is quite correct, however it is one that Russia is flagrantly ignoring in its prosecution of Chiygoz, Umerov and a number of other political prisoners.

The ‘proof’ presented as evidence of the Mejlis’s extremism back in April included a document published by Mustafa Dzhemiliev back in Soviet times (1988).  The Mejlis’ founding documents which also far pre-date annexation were pulled out.  Their supposed ‘extremism’ lay in the stated aim, namely the reinstatement of the Crimean Tatar people’s national and political rights as part of Ukraine.  The other material presented included the notification of criminal proceedings lodged against Mustafa Dzhemiliev for having tried to enter his homeland; and against Refat Chubarov, for “encroaching upon Russia’s territory”, that is, opposing Russia’s occupation of his native Crimea.  The legally nihilistic charges against against Akhtem Chiygoz regarding a demonstration over which Russia has no jurisdiction were also put forward.

The Supreme Court’s ruling was as predictable as the original ban.  Since the ban has now come into effect and is likely to result in even worse persecution of the indigenous people of Crimea, the challenge is now on the West to react with at least tougher sanctions.