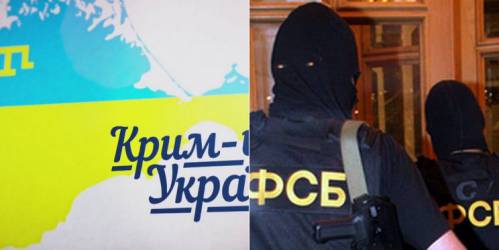 An armed search was carried out on Oct 5 of the home of Suleyman Kadyrov, a member of the Feodosia mejlis (regional self-governing body).   The search warrant was issued over ‘suspicion of extremist activities’ with the said ‘extremism’ being found in a Facebook post from March 2016 in which Kadyrov calls Crimea part of Ukraine.

The officers, many with machine guns, turned up early on Oct 5.  Kadyrov immediately informed them that he would not give any testimony or explanations, nor would he sign their search protocol, since his rights were being violated.  He asked to have his lawyer present, and witnesses he chose, but told Krym.realii that the officers insisting on using the ‘witnesses’ they brought.

They spent around 3 hours and took away his computer and telephone.  One of the FSB men told him that this would not be their last visit and that he would be called in for questioning.

It is unclear as yet whether criminal charges will be laid, but Kadyrov assumes that the FSB have already initiated proceedings against him.   Mejlis leader Ilmi Umerov is facing a possible 5-year sentence for expressing a similar position, and Kadyrov assumes that he too may be charged with ‘public calls aimed at violating Russia’s territorial integrity’.  Article 280.1 of the Russian Criminal Code came into force three months after Russia invaded and annexed Crimea, and has been applied most often against those who criticize this breach of international law.

The specific pretext in Kadyrov’s case was a reposted TV ATR broadcast in March this year about people giving money to the Crimean Tatar battalion on the administrative border with Crimea.  Kadyrov wrote that he supported this since Crimea is Ukrainian.

It was not the first visitation.  Kadyrov was subjected to a search last November over his support for the Crimean civic blockade.

The Facebook post in March would in any case be a pretext since Kadyrov has never concealed his views.  He was among the many Crimean Tatars finally able to return to Crimea after Ukraine’s Independence in 1991.  As a graduate of the Soviet Police Academy, he took on a police job in Crimea.

The Supreme Court’s refusal to overturn the ban on the Mejlis was unfortunately expected.  The Mejlis probably foiled the Kremlin’s attempts to avoid openly using Russian soldiers to seize control of Crimea on Feb 26, 2014, and remained implacably opposed to Russia’s occupation.  From mainly targeting Mejlis leaders, Russia soon turned to a major offensive against the Mejlis itself.

Even before the ban formally came into effect, the first Mejlis members, including Ilmi Umerov, had been fined for holding a Mejlis meeting, and since the Supreme Court hearings, there have been further such measures.

What is worse is that the fines are almost nothing in comparison with the dangers members of the Mejlis now face.  Akhtem Chiygoz, Deputy Head of the Mejlis has been held in detention for almost 2 years and there is clearly no intention of releasing him.  Umerov is also facing criminal charges, and these could be brought at any time against most Crimean Tatar Mejlis figures.  It was Suleiman Kadyrov who predicted after the court hearing on Sept 29 that the regional mejlis would now also come under fire.  It has probably already begun.