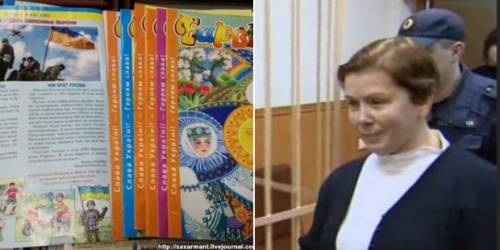 The Moscow Prosecutor has proven undaunted by previous failures and is once again seeking the imprisonment of Natalya Sharina, Director of the Ukrainian Literature Library in Moscow for so-called ‘incitement to enmity’.  The new indictment is due to reach the courts shortly, though is likely to also be sent back for clarification as to what ‘extremist act’ Sharina is supposed to have committed.  The lack of any substances to the charges has not prevented court after court from extending Sharina’s very strict house arrest for almost a year.

Sharina’s lawyer, Ivan Pavlov, told Interfax that he has already received the new version of the indictment.  He says that the investigators have still not managed to clearly formulate the allegations of extremism.  From the indictment, he says, it is unclear what acts Sharina is accused of and the court will have no choice but to return it to the prosecutor.   This current attempt appears to be the fifth so far.

The following day Russia’s Investigative Committee reported that the 58-year-old librarian was accused of ‘inciting national enmity or hatred, and also denigrating human dignity” (Article 282 § 2b of the Russian Criminal Code).  The charges can carry a sentence of up to 5 years imprisonment. The Investigative Committee asserted that from 2011-2015, Sharina, in her capacity as Director of the Library, had  “circulated among visitors books by Dmytro Korchynsky designated by the court as extremist material and prohibited for use”.  Printed matter was also allegedly removed which was claimed to contain “calls to anti-Russian state and anti-Russian propaganda”.

According to both Sharina and her colleagues, the material supposedly ‘found’ in the library had, in fact, been taken away during a search in 2010 and had not been returned.

Thankfully, Pavlov, a well-known human rights lawyer, and his colleague Yevgeny Smirnov took on the case. They succeeded in thwarting the prosecutor’s demand that Sharina be held in a remand prison where she would doubtless have remained to this day.  During the first two days she had been held in a police cell, deprived most of that time of food, water and sleep.

Ironically, Sharina, a Russian national who apparently does not even know Ukrainian, was taken on after a previous offensive against the Ukrainian Literature Library – as being more politically ‘reliable’.  This was not enough to protect her when the Library became the next target in Russia’s ongoing offensive against Ukraine.

On Nov 16, 2015 the authoritative Memorial Human Rights Centre declared Sharina a political prisoner.  Memorial noted that Korchynsky himself on many occasions addressed a pro-Kremlin youth camp in the Moscow region during the 2000s.  He and his ‘Bratstvo’ organization are fairly notorious in Ukraine as provocateurs, and are suspected, with cause, of having been used to provoke police backlash in the recent past.  Memorial HRC points out also that only one book by Korchynsky is on Russia’s substantial List of so-called ‘extremist materials’.

“The criminal proceedings against Natalya Sharina have taken place against the background of the anti-Ukrainian campaign continuing since Spring 2014 in the state-run media and in utterances made by public officials holding high posts in the Russian Federation’s leadership.  One of the parts of this campaign is to initiate criminal cases against citizens publicly expressing a position on what is happening in Ukraine that differs from the official position or in any way linked with Ukraine. In our opinion, it is specifically in the light of this anti-Ukrainian campaign that the case of Natalya Sharina should be viewed, ” the statement read.

The investigators commissioned a so-called ‘expert’, Yevgeny Tarasov to carry out a ‘psycholinguistic’ assessment of books from the library as part of the criminal proceedings against Natalya Sharina, director of the library and now a recognized political prisoner.  Tarasov was asked to investigate 24 publications from the library and, obligingly, found ‘extremism’ in 22 of them, including the children’s journal ‘Barvinok’ (more details about the illustrious expert’s conclusions here).

As reported, in April 2016, the investigators came up with extra charges, ones that can carry a 10-year prison term.  The new charges were under Article 160 (§ 3 & 4) of the Russian criminal code (‘appropriation or squandering’ ).  She was accused of having paid the lawyers representing her over previous charges attempted in 2010,  but finally dropped from “state funds and the fictitious employment of two legal consultants”.

Pavlov commented then that when the investigators have grabbed somebody, any pretext will do.  He called this a standard ploy when the original charges are falling apart.  This was, indeed, seen with the abduction, torture and charges of war crimes against Ukrainian Serhiy Lytvynov.  The Investigative Committee was forced to withdraw insane charges based only on ‘confessions’ tortured out of Lytvynov after it was conclusively proven that neither the alleged victims, nor their addresses had ever existed.  That was well over a year ago. The ‘investigators’ simply came up with a second implausible story which, despite its absurdity, the court accepted.  Lytvynov was sentenced to 8.5 years, and is also a recognized political prisoner.

In both cases, the pro-Kremlin media hype was a major part of the exercise, and for the moment Russia is not letting go of its ‘extremism’ charges.  Sloppy implausibility is not a problem when the courts will, at most, just bounce the indictment back for another try.