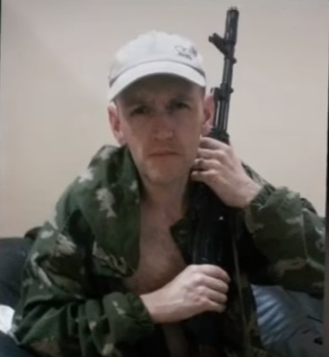 British prosecutors have accepted that fighting on the side of the Kremlin-backed militants in eastern Ukraine falls under the UK Terrorism Act.  Whether or not British national Ben Stimson can convince a UK court that he wasn’t really fighting in Donbas, the fact that he is on trial at all is an important precedent.

Police in Manchester said in a statement on September 28 that Stimson was charged with terrorism offences under Section 5 of the Terrorism Act 2006 (Preparation of terrorist acts).  He is accused both of 5i – engaging in conduct aimed at committing acts of terrorism and of 5ii - assisting another person to commit such acts. The first carries a sentence of up to 10 years, the second up to life imprisonment.

The preliminary hearing, setting out a timetable for subsequent hearings, took place on Oct 7, with the next due on Nov 4.

41-year-old Stimson is from Oldham, Greater Manchester.  He does not deny that he went to Donbas, but appears to have claimed that he went there to drive an ambulance.

This is not the version he gave to a BBC interviewer in October 2015, nor is the impression the photos of him with a rifle, etc. on his social network page gives.  It is also not the line taken by pro-Kremlin media such as Vzglyad.  That newspaper reported in February that EU countries had begun hunting down “Donbas militants” and cited a source within the so-called ‘Donetsk people’s republic’ [DNR] in calling Stimson a ‘militant’.

The BBC article was entitled ‘Ukraine conflict: The Brits fighting with pro-Russian rebels’.  This states that “Eastern Ukraine is not his first conflict. He claimed he was involved in Bosnia, and says he thought about joining the Kurdish Peshmerga in northern Iraq.”

The report says that lack of work at home, and ideology prompted him live “with a group of rebel soldiers, just north of the city of Debaltseve in rebel-held territory”.

"I see this as more western imperial aggression towards Russia, to people who aren’t playing the western game", he said.

He did not want the BBC to show his face, or use his name, but denied that he was “meddling” in the conflict and said that he was no terrorist.

The BBC points out that the UK government has warned that "people who travel abroad to participate in conflicts may be committing criminal or terrorism offences and could face prosecution when they return to the UK".

“Wearing a balaclava over his face during our interview, the British man said he would be prepared to kill someone if his life was threatened.  And he said that if he died in eastern Ukraine, it would have been worth it because he is "doing something he is proud of".

The British man was Stimson, and he was indeed arrested when he returned to the UK.  He later gave an interview to Graham Phillips, the Russian propagandist whose recent harassment of a maimed hostage elicited widespread condemnation and calls for his prosecution.

Stimson claims in that long interview that the BBC manipulated him, and deceived him by getting him to pick up a rifle.  He does not explain why there are similar images of him in camouflage gear and holding weapons on his social network page.  He claims, also without being challenged, that he was ‘helping’ people in Kurdistan and “doing humanitarian work” in Bosnia.

He does in fact say later that he was in the ‘militia’ and “stuck in a trench with a rifle”, though asserts that he was trying to get out of the militia and do what he’s allegedly gone there to do, drive ambulances.

He denied both to the BBC and to Phillips that there were any Russians in Donbas, or that Russia was organizing things, though he parrots Russian propaganda about ‘Ukrainian fascists’.  From the Phillips interview, it is clear that he only dimly understands what is Ukraine, what Russia.  He says, for example, that he’d wanted to live there, then that he came back to get money “to live in Russia”.

Most importantly, he arrived in Moscow where he was put on a coach and taken to Rostov, then by car to the militant-controlled border, and from there by car to the militants.  This is a route long known to all those following how fighters are brought to Donbas.  Russia has drilled people to deny any financial benefit, but it is known that many of the Russian nationals who go to fight come from areas with serious poverty and unemployment.  There are numerous questions here.  Stimson entered Ukraine illegally since he crossed from Russia through part of the border controlled by militants.  He would have arrived in Russia on a legal visa, and it is surely relevant to find out who organized this for him.

At least one Latvian has been arrested this year under Article 77.1 of the Latvian criminal code.  This envisages up to 10 years’ imprisonment for “active participation in armed conflict outside Latvia aimed against state territorial integrity or political independence”.

Ukraine’s Ambassador to the UK Natalya Halybarenko believes that the Stimson trial is important precisely because Stimson is charged with terrorism.  She sees the trial as effective confirmation that what is happening in eastern Ukraine is not a civil conflict, but the activity of terrorist organizations, which are financed and sponsored by Russia.

It is unclear as yet what evidence has been gathered against Stimson, and what the prosecution’s case will entail.

Stimson has himself admitted to going to Donbas via Moscow, and in part because he had no work in the UK.  The militants – whether pro-Russian or Russian – would hardly have been willing to sit in the trenches with a man holding a rifle he had not been taught how to use.

Igor Sutyagin, writing for the Royal United Services Institute [RUSI] back in March 2015, estimated that there were around 10 thousand Russian military engaged in eastern Ukraine, as well as considerable military technology.  The technology included the Buk missile used to down the Malaysian airliner MH17 over militant-controlled Donbas on July 17, 2014, killing 298 people.

The militants were first openly led by Russians – ex-military intelligence officer Igor Girkin, Alexander Borodai and others.  They were replaced by Ukrainian nationals after the downing of MH17.

Russia continues to deny its major role in the conflict in Donbas. The incontrovertible evidence that MH17 was downed by a Russian missile is only part of the ever-mounting evidence – from satellite images, witnesses, captured Russian soldiers and military intelligence officers, to the graves of Russian soldiers whose very death Russia tried to conceal.