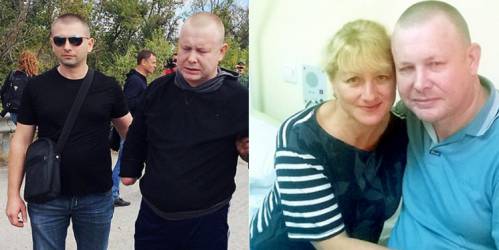 46-year-old former hostage Vladimir Zhemchugov remains in hospital a month after he was finally exchanged.  Now freed, he is able to tell his story – that of a Ukrainian who could not stand by in the Spring of 2014 and watch his native Luhansk oblast invaded and occupied. His testimony provides vital information about resistance to Kremlin-backed militants in the Luhansk oblast, as well as confirmation of the direct involvement by the Russian FSB and military in the conflict.

Some of the details reported earlier were quite correct, some it seems even his wife was unaware of until after his capture in September 2015, or even his release.  One thing, however, was true.  There were no Ukrainian Armed Forces sabotage groups, and Zhemchugov dismisses the militants’ claims as lies.  All lists from the police and military recruitment offices fell into the hands of the FSB early on, and any groups linked to the Ukrainian army would have been uncovered immediately.  The groups working in the self-declared ‘Donetsk and Luhansk people’s republics’ [DNR, LNR] are local residents.  Zhemchugov says that his group were people like him, who had done military service back in Soviet times, and were able to organize resistance.

An ethnic Russian, Zhemchugov was born in Krasny Luch (Luhansk oblast) in 1970 where in his early years he worked as a miner.  Vladimir and his wife had for many years been living and working in Georgia, but visited his mother in Krasny Luch several times a year.

They had arrived in Krasny Luch for Easter in April 2014 when Kremlin-backed and armed militants began seizing control.

Zhemchugov took his wife back to Georgia, moved his mother to Kyiv and returned, as he says, to defend his country.  He and his wife had been through the war in Georgia in 2008 and when he saw what was happening in his native Luhansk, he couldn’t simply return as if all was the same as before.

He initially wanted to join a volunteer battalion, but was told that as a Luhansk person, he would be much more use undercover.

He and others were involved in acts of sabotage targeting trains or columns of trucks with military technology, military officers and the telecommunications for military units.  He stresses that there are other individuals who also find ways to demonstrate their opposition to militant rule – by raising flags in public places, graffiti etc.  Each such act puts the person in danger, but has impact.

In September 2015, he had just carried out one of the tasks – blowing up an electricity supply to a military base for the militants when he stepped on a mine.  He suffered multiple injuries, with some of the shrapnel nearly reaching his heart.  He explains that he had heard the click indicating that he’d triggered the mine, but didn’t have time to run, and instinctively tried to protect his head.  The explosion left him almost blinded and both arms from the elbow so badly damaged that they had to be amputated.

His story is harrowing.  He says that he had made sure that all his affairs were in order, and he now planned to kill himself to make sure that under torture he didn’t betray his partisan comrades. .  It was not the pain from his injuries.  He feared being taken prisoner and tortured into betraying others. He says he knew that trucks come from Russia to Luhansk at night with ammunition and dragged himself out onto the road, hoping to be run over.

The drivers, however, managed to avoid him and clearly also reported that he was there.  He was picked up by militants and taken to hospital.  The medical care was basically fine, but they had understood that he was a partisan and wanted to extract information.  He was held under 24-hour guard, with cruel forms of pressure applied against him.  He would awaken from the latest anaesthetic, feeling a gun at his forehead, with the two people, a man and a woman, discussing where they’d bury his body.  This would happen many times a night.   He understood what they were playing at, he says, and didn’t give way.

They threatened to abduct his wife, daughter and mother and torture them until he broke, and then tried to convince him that his wife had rejected him, found somebody else, and that nobody needed a cripple like him. It was surely no coincidence that Russian propagandist Graham Phillips parroted this same line when he accosted and tormented Zhemchugov as he sat in an ambulance following his release.

Zhemchugov recalls that later the Russian security services got involved.  It was clear, he explains, both from the questions asked and from their accent.

They all seemed to have an inflated idea of his importance, talking about him as some kind of special agent.

When he didn’t break, they started injecting him with medication clearly aimed at dulling his resistance.  He tried again to kill himself, by biting through the tube on his drip and blowing into it.  He hoped in that way to get air into his veins and die. Once again they caught him in time.  He says that the head of the department even came to him and told him that the militants wouldn’t let him die, but there would be trouble for the doctors in any such case.  “I hear that your wife’s a doctor.  Don’t get us into trouble”.

For a long time, the only public information about Zhemchugov came from the LNR militants and a propaganda site linked with them.  The latter published a video with Zhemchugov looking shocking and you could scarcely hear him ‘confess’, as demanded, to carrying out acts of sabotage for the Ukrainian armed forces.  Zhemchugov says that he still managed to provide another story and that his colleagues in the partisan unit had time to safely leave areas under militant control.

They then decided to ‘try him’ for sabotage, and even moved him to the medical unit of a SIZO or remand prison.  There was in fact one advantage to this.  The militants tried to imitate compliance with the law, allowing him, among other things, to finally speak with his wife by skype.

As reported here, numerous attempts to organize his exchange had fallen through and by the time it really happened, on September 17, Zhemchugov had become quite wary of letting his hopes be raised.  It was only when he heard his wife’s voice using her special word for him that he understood that this time it was for real.

Doctors promise artificial arms.  With his eyesight, the situation is still unclear but there is hope that his sight could be restored in one eye.

Zhemchugov told Radio Svoboda that it is not only patriotic Ukrainians who are fighting the militants currently in power in ‘LNR’.  There is a split among the militants between those around Leonid Plotnitsky, the leader currently supported by Russia and the former ‘Cossack activists’, and that means between the so-called Luhansk people’s militia and Cossack units.

Zhemchugov stresses that there is currently a fierce battle raging for power and for money.  While Russian money is coming to Plotnitsky, he keeps tight control of it, and of the so-called ‘ministry of state control’ and ‘prosecutor’s office’.

Some of the militants known to anybody following the abuses in 2014, like Nikolai Kozitsyn, are themselves now imprisoned, without any trial.  At the moment, Plotnitsky has his grip on Russian money, and Kremlin-bestowed power.

It is not clear how many partisan units there are in militant-controlled Donbas, but Zhemchugov’s was clearly not the only one.  He says that the militants and FSB officers asked him if he regretted his actions. “I answered them that if it all happened again, I would go again. They held me captive so long to get me to say on video that I’d been forced, that I was just frightened of being prosecuted.  I didn’t do it”.