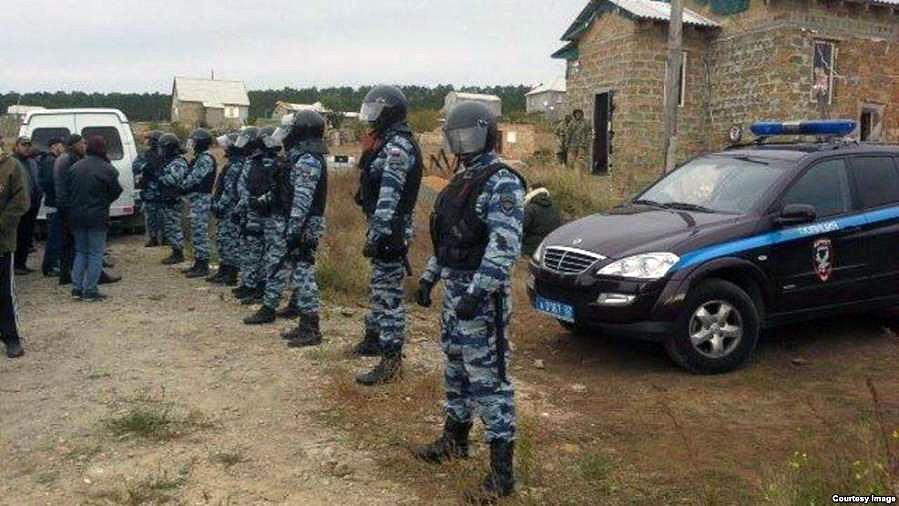 Five more Crimean Tatars are in custody in Russian-occupied Crimea accused of involvement in an organization which is legal in Ukraine.  The five men are all devout Muslims and some at least have this year or last taken part in the Hajj, or pilgrimage to Mecca.  Under Russian occupation, no more appears to be needed.

Human rights lawyer Emil Kurbedinov was present during the search of Timur Abdullayev’s home. As usual, he says, nothing was found except Muslim literature.  He is in no doubt that this is the latest phase of repression and intimidation against Crimean Tatars, Crimean Muslims.  He specifically asks the international community to come out in their defence.  As soon as people hear ‘Islam’, ‘Hizb ut-Tahrir’, he says, they back off and don’t want to know, with this helping only Russia in its repression.

On the video here, the wife of Rustem Ismailov speaks of how the men in masks simply burst in, waking them and the children.  They gave no explanation, showed no documents and hit her husband, forcing him to the floor and putting handcuffs on him.  They found absolutely nothing to warrant such a search, but removed a computer, tablets, telephone and also a large amount of money, which the family was holding for Ismailov’s brother.  The degree of gratuitous force was repeated in all five cases.

These arrests follow a certain pattern with one person accused of ‘organizing a terrorist cell’, under Article 205.5 § 1 of the Russian criminal code, and the others of ‘taking part’ in it, under 205.5 § 2.

In this case, it appears that 41-year-old Timur Abdullayev is charged with being ‘organizer’, with this carrying a possible sentence of up to 17 years’ imprisonment.  Uzeir Abdullayev (42); Emil Dzhemadinov; Aider Saledinov and Rustem Ismailov (32) with the lesser charge of ‘involvement’.  Ismailov is from Kamenka, the others from Stroganovka.

Judging by the fact that the Russian state-controlled RIA Novosti agency has already reported the searches as a “special operation on eliminating a Crimean cell of Hizb ut-Tahrir”, it seems inevitable that they will be the next five Muslims to face effectively indefinite imprisonment.  There are now a further 17 small children who have had their fathers – and the family’s breadwinner – taken away.

This brings the number of arrests for alleged involvement in the pan-Islamist movement Hizb ut-Tahrir which is legal in Ukraine and most other countries to 19.

The silence from the international community, and especially international rights NGOs, is all the more baffling since the renowned Memorial Human Rights Centre has recognized the first four men already tried  – Ruslan Zeitullayev, Ferat Saifullayev; Rustem Vaitov and Nuri Primov – as political prisoners.  It is only a question of time before all receive the same status.

Memorial HRC has repeatedly condemned all Russia’s prosecutions of Muslims for no more than purported involvement in Hizb ut-Tahrir, but it has additional grounds for criticism with respect to the arrests in Crimea. It notes:

We would note that this criminal prosecution is the first of three initiated against Crimean Tatars on terrorist charges, and it is part of the campaign of repression unleashed in the occupied peninsula.”

This organization is legal in Ukraine and in all western countries (except Germany where there was an administrative ban on forming a German branch, not a criminal ban).   Russia’s Supreme Court declared it ‘terrorist’ in a 2003 judgement which was long kept secret, preventing the organization itself and rights NGOs from appealing against it.

The first sentences were handed down in Rostov (Russia) on Sept 7.  Zeitullayev, Saifullayev, Vaitov and Primov were, as anticipated, ‘convicted’, despite the lack of any evidence and flagrant violations of procedure.  There was, however, one positive note.  The court requalified the charges against Zeitullayev from ‘organizing’ to ‘taking part’, meaning that he received a 7-year sentence, rather than the 17 years demanded by the prosecutor.  The other men were sentenced to 5 years.

All sentences have been appealed by the defence, and at least the Zeitullayev sentence (the change in charges) has been challenged by the prosecutor.  It remains to be seen what the appeal brings.

A great deal will hinge on that.  These arrests and trials have been called a ‘conveyor belt’, and it can be safely assumed that the courts provide the sentences they are told to pass.

International pressure is vital to stop this conveyor belt, aimed at terrorizing Crimean Muslims in a part of Ukraine which Russia is illegally occupying.