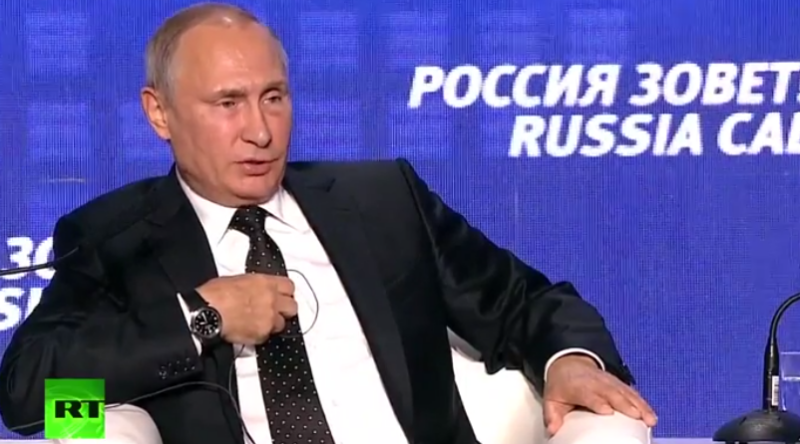 At a forum on Oct 12, Russian President Vladimir Putin made his most direct acknowledgement so far of Russia’s long-known yet denied role in the conflict in Donbas.  It is possibly no coincidence that the admission follows a week or so of Russian nuclear sabre-rattling and what seems like a major campaign to convince the world that Russia is preparing for war.  Putin went on to assert that it was virtually impossible to conduct dialogue with the current US Administration. This, lo and behold, just happened to coincide with the claim from Russian politician Vladimir Zhirinovsky that “Americans should vote for Donald Trump as president next month or risk being dragged into a nuclear war”.

Putin’s words contained some crucial factual inaccuracies, but Russia’s engagement was not one of them, and here he seemed quite clear.  He stated that: “We were forced to defend the Russian-speaking population of Donbas, forced to react to the desire of people living in Crimea to return to the Russian Federation”.

He went on to blame the USA for Euromaidan, claiming that it was they who had financed what he referred to as the “radical opposition” and Ukraine for the failure of the Minsk Agreement.

This was not the first time Putin has admitted a military role in Donbas.  On Dec 17, 2015, he acknowledged that “Russian military personnel were “resolving various issues" in Donbas.  He had been asked by Ukrainian journalist, Roman Tsymbalyuk about possible compliance with the Minsk agreement by releasing all Ukrainian political prisoners like Nadiya Savchenko and Oleg Sentsov, exchanging them for two Russian military intelligence officers captured in the Luhansk oblast.  Putin began by claiming that Russia had never said that they did not have people in Donbas engaged in various activities, including in the military sphere. But there are no regular forces, he asserted, and asked the audience (if they could) to “feel the difference”.

Putin’s admission this time comes just weeks after the international investigation into the downing of the Malaysian MH17 airliner by a Russian BUK missile.  His honesty is startlingly brash under those circumstances.

Moscow has always admitted that Russian nationals were fighting in Donbas, but has assiduously pushed the narrative that they are prompted, as Putin once claimed, “by the call of the heart”, and in no way Russian soldiers or mercenaries.

There is enormous satellite, video, witness and other evidence giving the lie to these claims.  There are also the graves of Russian soldiers who are known to have been killed in Donbas.

On Wednesday, Putin seemed to be shedding the myth about volunteers in Donbas, just as he once suddenly acknowledged that the soldiers in Crimea without insignia were indeed Russian. His version of events was deeply dishonest.

Russian soldiers seized control of government buildings in Simferopol on Feb 27, a day after a huge demonstration prevented an attempt to announce a change in Crimea’s status.  There is considerable evidence, including from tapes recently made public of intercepted conversations between Putin’s adviser Sergei Glazyev and others, that Russia was directly coordinating events long before the actual invasion.  A major player, first in Crimea, then Donbas was former Russian military intelligence officer Igor Girkin [nom de guerre Strelkov].  He has acknowledged arriving in Crimea on Feb 21, 2014, which gives the lie both to Putin’s own belated admission that preparations began on Feb 23, but shows clearly that the plans preceded Yanukovych fleeing on Feb 22.

Moscow has constantly tried to blur the picture, claiming that Russian soldiers were there to oversee a ‘referendum’ on joining Russia.  That so-called ‘referendum’ was announced by the marginal pro-Russian leader Sergei Aksyonov whom Russian soldiers helped to seize control on Feb 27.  There is plenty of testimony from different sources confirming that all parts of the procedure required Russian soldiers with Kalashnikov rifles.

The situation was similar in Donbas.  There were initial attempts to use locals, like Pavel Gubarev, a young man with neo-Nazi leanings and strong Russian links, to seize official buildings.  The attempts largely failed, even after huge numbers of Russian ‘tourists’ of a certain age and build began appearing to help the process along.  The real seizure of power came in early April with the heavily armed and well-equipped men around Girkin clearly led by Russians and from Moscow.

The suggestion that Russia needed to intervene to protect the Russian-speaking population is absurd, since many of those who took up arms to defend Ukraine against the aggressor were themselves Russian-speaking.  It is also profoundly offensive given the senseless carnage and devastation caused, and huge number of people forced to flee their homes.

Russia’s military directly intervened in three major military battles – in Mariupol; Ilovaisk and Debaltseve, however it has long been known that 10 thousand Russian military personnel or more may be directly involved.

As well as military personnel, Russia has also been sending huge supplies of arms and military equipment across the militant-controlled part of the border, together with an unknown number of fighters.   Those sending the men drill them on what to say if asked why they’re there and most oblige by claiming to have come as volunteers to fight ‘fascists’.  While fascist ideologue Alexander Dugin and others did send their supporters to fight on ideological grounds, it is common knowledge that the vast majority of fighters are there for money.

Here too Russia’s position is questionable.  The trial has begun in the United Kingdom of a British national Ben Stimson who is charged under the UK Terrorism Act over his believed fighting for the militants in Donbas.  Believed fighters have also been arrested in Latvia.  Yet in Russia, only one person has been sentenced to a prison term – for allegedly fighting for the Ukrainian side.  Even if we assume (without any reason) that the authorities in Moscow are not directly involved in the recruitment of men to fight in Donbas, they are very clearly not taking any measures to prevent it.  There are serious grounds for trying people like Girkin for war crimes or crimes against humanity committed in Ukraine.  He continues travelling around Russia, describing his activities in the media without any consequences.  A St Petersburg lawyer Arkady Chaplygin even demanded back in March that criminal proceedings be initiated.  He was ignored.

It is for political analysts to determine why Putin decided at this time to show such openness about direct interference in its neighbour’s affairs.  They would do well to also probe Zhirinovsky’s openness which is often used to articulate, in extreme form, messages that the Kremlin wants the West to hear.