French MPs paid from Russian coffers for Crimea propaganda trip?French Collaborators Kiss Monument to Russian Invaders of CrimeaNo surprises as Trump says he could recognize Crimea as ’Russian’ & lift sanctionsA British Foreign Secretary who excuses Russia’s invasion of Crimea?Kremlin’s Donbas proxies congratulate UK for ’doing what they did’ & voting for BrexitBrexit a gift to Putin, the far right & Trump, a blow to democracyEx-Mayor of London Boris Johnson blames Russia’s annexation of Crimea on the EUWhat European Values if Dutch Referendum Result Stands?Appeal by the leaders of Ukrainian national communities to the Dutch populationFormer Soviet political prisoners call on Holland to say yes to Ukraine’s European futurePlaying with fear and ignoranceHow a democratic tool became a threat to democracyUkrainian Jewish leaders appeal to Holland: Give our country the chance to break with the pastDutch referendum puts Ukraine in spotlightEven in Russia, Putin’s ‘denazification’ claims prove no excuse for war against UkraineStand With Ukraine! Address to the International Community by Ukrainian Human Rights DefendersItalian public broadcaster pushes Russian lies about MH17 and war in Donbas Italy detains Ukrainian theatre director who left Russia in 2014 in protest at its aggression against Ukraine Germany’s Nord Stream 2 collaboration comes as Russia holds a record number of Ukrainian political prisoners May 18 is a mourning day for the Crimean Tatar people
• Topics / Politics and human rights
• Topics / Human Rights Abuses in Russian-occupied Crimea 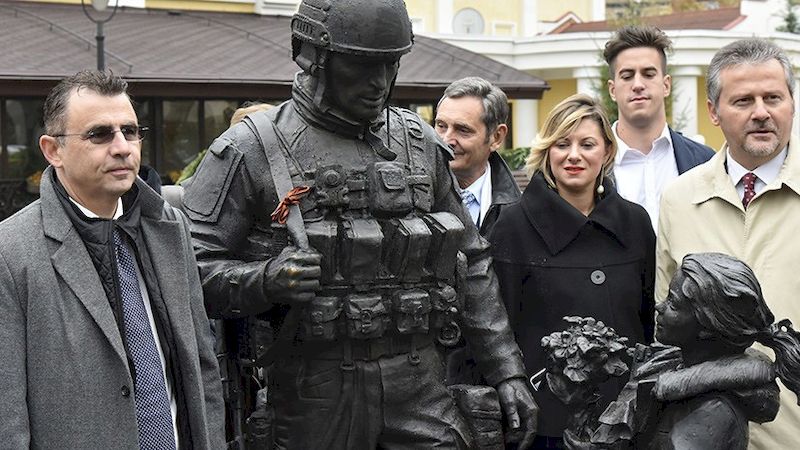 Photo: RIA Novosti (around the monument to the Russian soldiers without insignia who seized government buildings on Feb 27, 2014)

The 3-day visit to Russian-occupied Crimea by a new ‘delegation’, this time from Italy, is so similar to others that it is tempting to ignore it.  Almost all of the politicians appear to be linked with the far-right Lega Nord [Northern League] party which can be relied on to not see (or even deny) grave rights abuses since Russia’s invasion and call for an end to sanctions.

There are two interrelated reasons for not ignoring them.  Such visits serve propaganda purposes, and the Russian state-controlled media goes all out to inflate their importance, as part of ongoing efforts to ‘prove’ that the international community has accepted Russia’s annexation of the peninsula.  The other reason lies in the 5 supposedly “major businesspeople” who are reported to have come on the trip. If these really exist and are planning business deals, then they are in serious breach of international law and their identity should be made known, together with their illegal promises to flout sanctions.

Russia’s attempts to justify its invasion of Crimea and aggression in Eastern Ukraine because of so-called ‘fascists’ in Kyiv went hand in hand with its cultivation of close relations with far-right, sometimes neo-Nazi politicians in Europe.  Members of Lega Nord have been used to try to give legitimacy to the Crimean land-grab since back in March 2014 when one of its members Claudio D’Amico joined a team of specially selected ‘observers’ for Russia’s illegal ‘referendum’ on annexation.  All of them provided the glowing praise required of them.

In May this year, a major effort was undertaken to convince more than just a domestic Russian audience that ‘Venice’ or the ‘Venice Parliament’ had recognized Crimea as Russian.   In fact, it was 27 deputies, including many from Lega Nord, from the Veneto region parliament who pushed through a non-binding resolution, calling for recognition and an end to sanctions.

The initiator of that ‘resolution’ was Stefano Valdegamberi from an organization linked with Lega Nord.  He has been one of the most vocal members of the group visiting Crimea from Oct 14-16.

He claims that the visit “is one of the forms of protest by northern regions against the policy of the Renci government”, and asserts that their calls for the sanctions to be removed are not heard “due to the climate of Russophobia”

It was Valdegamberi who also proved most expansive on the subject of business links. He is reported by the Russian propaganda site Sputnik to have stated that:

"The business leaders and entrepreneurs who have arrived with our delegation do not always go public with this, but a good number of them are already operating in Crimea," Stefano Valdegamberi told reporters.   Valdegamberi said Italian companies with a foothold in Russia were particularly interested in supplying Crimean wineries with wine-making equipment.

There are also plans to produce goods in Crimea, he added. "Italian businesses who are working in the Russian market are particularly interested in Crimea and have begun to invest in the region… they don’t just want to sell some stuff in Crimea but produce goods here," he said.

In a separate report, TASS called the businessmen “authorized representatives of the business community”.

All of this serves as good propaganda for Russia, but is a direct admission of violation of EU sanctions which are binding on Italy as a member state.

Anton Shekhovtsov has managed * to identify all of the 18 “politicians and businessmen”.  This makes it clear which businesses warrant particular scrutiny.

All members of this group breached Ukrainian law by not entering Crimea through Ukrainian passport control.

According to Russian media, the trip was organized by the so-called ‘Yalta International Economic Forum’ and ‘government of Crimea’.  The ‘forum’ is referred to as a ‘fund’, and it seems likely that this was an all-expenses paid excursion for the participants.

They appear to have been marginally less obsequious than the group of French politicians in early August, whose trip was also almost certainly Russian-funded.  In their collaboration with the occupation regime, the French politicians - 10 from Nicolas Sarkozy’s Republican Party and one ex-socialist – even denied well-documented and irrefutable arrests, forced disappearances and killings (see French Collaborators Kiss Monument to Russian Invaders of Crimea). In fact, even silence about such abuses, about the latest wave of arrests and mounting repression against Crimean Tatars is already a craven betrayal.

The Italian Foreign Ministry earlier called on the group to refrain from their illegal visit.  Since at least one member of the group has publicly admitted to breach of EU sanctions, it would seem appropriate for the Italian prosecutor to start asking questions.

Members of the group


The Italian delegation was accompanied by Robert Stelzl, an Austrian and an employee of Ewald Stadler, the leader of the fringe right-wing populist Reformkonservativen party. Both Stelzl and Stadler were among ’observers’ of the pseudo ’referendum’ in March 2014