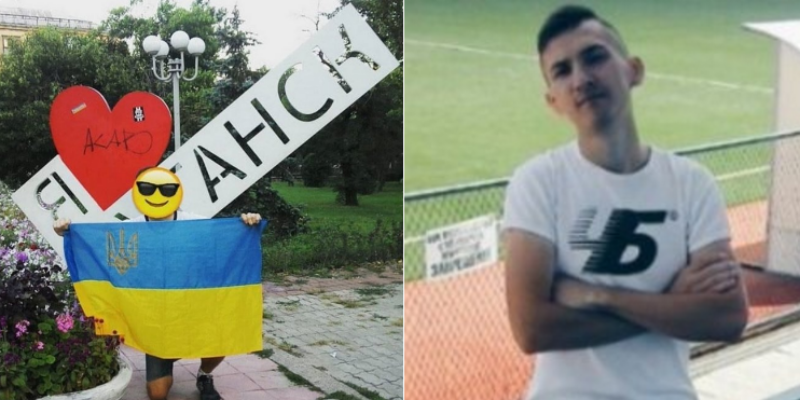 Several young people have been accused by Kremlin-backed militants from the so-called ‘Luhansk people’s republic’ [LNR] of ‘spying for Ukraine’ and ‘treason’, with this seemingly linked to photographs of themselves with the Ukrainian flag posted on social networks at the end of August.

Informator has learned from a source which cannot be named that fans of the football team ‘Zarya’ Luhansk were detained.  One of the young men is 19-year-old Vladislav (Vlad) Ovcharenko.

The ‘arrests’ by what the militants call their security service took place on Oct 10, but their families had remained silent about them, hoping that the young men would be released.  They have not been, and Informator has also been told that four other men have been taken prisoner.

Ovcharenko and a friend are believed to have gone out on Oct 10, and were due to be meeting up with Ovcharenko’s girlfriend.  They did not arrive and there has been no word from either young man since.

That evening 15 armed men, with the initials of the ‘LNR security service’ on their clothes, turned up at Ovcharenko’s home and carried out a search lasting around 3 hours.  They found nothing ‘prohibited’, but took his mother’s computer away.

Ovcharenko’s parents went to the ‘security service’ headquarters the following day.  The militants initially denied any involvement, but finally admitted that both young men had been detained.

Somebody claiming to be an LNR security service investigator contacted Ovcharenko’s parents on Oct 13.  They were first told that their son was being held for 48 hours, then that he had been arrested for 2 months.  The militants claim that he could face a ‘sentence’ of from 12 to 15 years for what they call spying and treason.

Ovcharenko’s family has not been allowed to see him and in fact the militants will not even tell them where he is being held.  Julian Röpcke, from Germany’s Bild newspaper, has reacted on Twitter to the news of Vlad’s ‘seizure’, saying that the young man gave him an interview in July.  If Ovcharenko hadn’t been under surveillance before, that would have certainly drawn the militants’ attention to him. 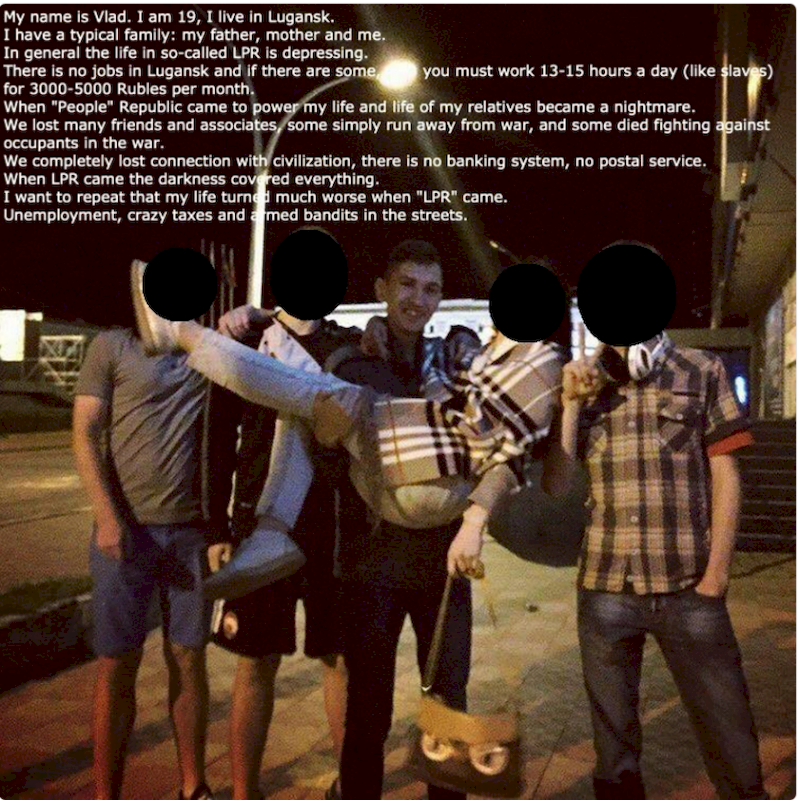 There is as yet no information about the young man Ovcharenko was seized together with, nor about the other four people.  It is unfortunately likely that they are too frightened to tell anybody.

Given the current information vacuum and the surveillance people are under in militant-controlled areas, it is effectively impossible to verify the information.  This is certainly not the only such ‘detention’, nor the only report of punitive measures against young people simply for photographing themselves or walking with the Ukrainian flag.

At the beginning of September, for example, some students were ‘caught’ walking through the centre of Luhansk holding a Ukrainian flag.  On that occasion, they were not detained, but were forced to publicly ‘express remorse’ for their actions and had to listen to some supposed war veterans from the Second World War tell them how the Kyiv government was ‘fascist’.

Now young men have been taken prisoner and are probably being held in a basement, and threatened with long terms of ‘imprisonment’.  There is every reason to fear that they have no real legal defence.

The same concerns apply with respect to the ongoing ‘detention’ of 5 young lads, most of whom are under 18, by the militants in the self-styled ‘Donetsk people’s republic’.

Following his release from militant detention, Vladimir Zhemchugov described how he and other Luhansk residents had carried out acts of sabotage directed at the militant / Russian war machine in ‘LNR’.  He also mentioned that there were others who demonstrate opposition to militant rule by secretly raising the Ukrainian flag, pro-Ukrainian graffiti, etc.

How much courage is needed can be seen by the weight of the repressive measures against those who get caught.