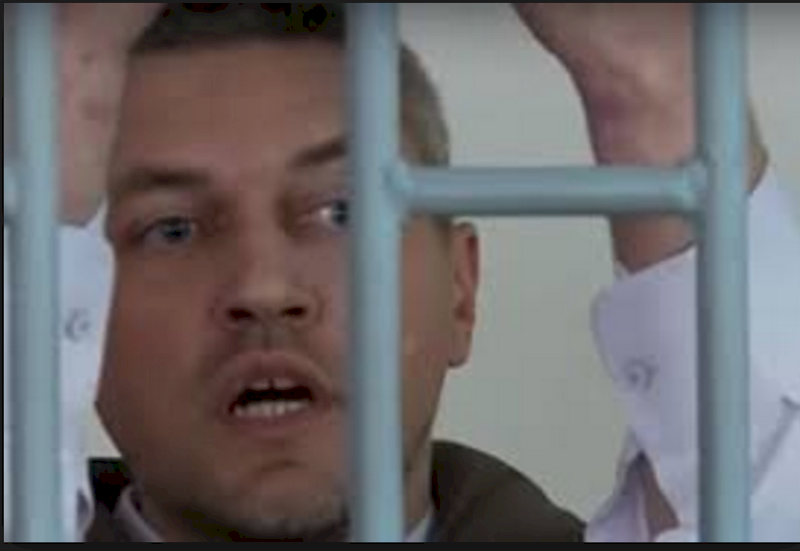 Russia’s Ukrainian political prisoner Stanislav Klykh’s rejection of his lawyer on Oct 17 is almost certainly linked with his psychologically disturbed state.  Even if the prosecution did not try to achieve such a result, it will eagerly remove a professional lawyer from this fundamentally flawed case, and the development only accentuates the urgent need for Klykh to receive an independent psychiatric assessment and treatment.

The 43-year-old historian from Kyiv was seized in Russia in August 2014, held totally incommunicado for 10 months during which he was tortured and filled with psychotropic drugs to extract ‘confessions’ to heinous crimes that never happened.  Even a 20-year sentence despite conclusive proof that he could not have committed any such crimes has not been enough, and Klykh is now being ‘tried’ for allegedly ‘insulting’ a prosecutor.

A new ‘hearing’ into the latter ‘trial’ began on Oct 17, after the judge who had already begun the case in September went on leave.  Caucasian Knot reports that the hearing appointed Aslambek Shailov as presiding judge.

It took a considerable amount of time on Monday to establish Klykh’s identity, with Klykh saying that he didn’t remember his date of birth and that he questioned the date written on his birth certificate.  In the end, the court reverted to the copy of his passport in the files.

Later Klykh announced that he wanted to reject his lawyer Marina Dubrovina, saying that he had been sentenced to 20 years because of her bad work.  He asserted that he had asked before.  It is not clear if this was the case, but his declared choice of ‘lawyer’ raises legitimate doubts as to whether he is in a fit state of mind to make such decisions.  He first announced that he wanted the singer Stas Mikhailov to defend him, then asked for other artists “Zveryov, Shura or Pelagea”.

Dubrovina told the court that she could not take part in the trial against Klykh’s wishes.  She did, however, point out that she has repeatedly warned of his state, caused by the use of torture and psychotropic drugs and has asked for him to undergo a proper psychiatric assessment in hospital.  The application was rejected, with the court having ‘resolved’ the issue of Klykh’s disturbed behaviour by simply removing him from the court hearings.  And, of course, by bringing these immensely cynical charges since Klykh’s behaviour, especially in January this year was very obviously disturbed.  Instead of recognizing this, the court appointed the kind of ‘examination’ that could be relied upon to find him fit to stand trial, and then claimed that he had caused ‘psychological damage’ by insulting a prosecutor.  The latter in court rejected Dubrovina’s arguments, claiming that there was no evidence of torture.

It should be noted that after the so-called examination in January, the prison administration began forcibly administering unidentified drugs. These were probably heavy-duty tranquilizers, but his lawyer’s attempts to ascertain their nature were fruitless.

Klykh and Mykola Karpyuk were sentenced in May 2016 to 20 and 22.5 years’ imprisonment, respectively, in what Zoya Svetova, a prominent rights activist,  has called  “one of the most insane and monstrously falsified prosecutions initiated against Ukrainian nationals since the annexation of Crimea”.

Russia claimed that Klykh and 53-year-old Karpyuk had (together with Yatsenyuk, Yarosh, etc.) taken part in fighting in Chechnya 20 years ago and that during battles in Dec 1994 and Jan 1995 they had killed a number of Russian soldiers.   Karpyuk was accused of creating and leading a band called ‘Viking’ and Klykh of taking part in it.  The case was entirely based on their ‘confessions’ extracted during the 18 months that Karpyuk was held totally incommunicado and without proper lawyers, and 10 months in Klykh’s case.  This is backed by provably wrong testimony provided by a Ukrainian national Oleksandr Malofeyev already serving a 23-year sentence and directly dependent on the Russian prison authorities for life-saving medication.

Of the 30 Russian soldiers who really did die, 18 were killed in another place altogether, and a further eleven were not killed by gunfire, as the prosecution claimed.   Only one man had died, as per the prosecution’s story, of gunfire, but not from the type of gun that the investigators claim was used.