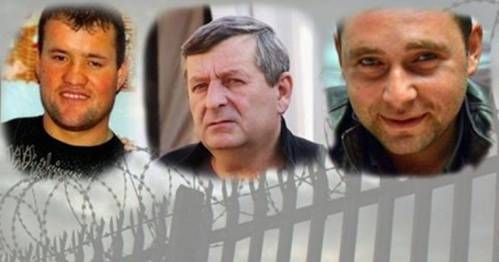 Ali Asanov and Mustafa Degermendzhy are paying a high price in Russian-occupied Crimea for their commitment to Ukraine’s territorial integrity, and for their own personal integrity. The Crimean Tatars are charged over a pre-annexation demonstration which prevented Russia from seizing control without deploying Russian forces and are almost certainly being held in detention as revenge for their refusal to give false testimony against the third political prisoner, Crimean Tatar leader Akhtem Chiygoz.

The demonstration in question took place on Feb 26, 2014, indisputably on Ukrainian territory, under Ukrainian law and with almost all participants Ukrainian nationals,  The lack of any jurisdiction means that even Russia’s own legislation prohibits the prosecution, yet this has worried neither ‘prosecutor’ nor ‘courts’.

The case is overtly discriminatory since it has targeted only Crimean Tatars although there were a large number of pro-Russia demonstrators at the meeting that day.

Even if  fundamental principles of law are ignored, there remains absolutely nothing to warrant the ongoing imprisonment of the three men, with the charges against each of them either provably false or simply vague and unclear.  Although the demonstration that day did result in two deaths, one person died of a heart attack and the other was crushed in the pro-Russian section of the meeting.  ‘Courts’ under Russian occupation, however, do what they are told, and the men’s detention has been extended now until Jan 2017, with no likelihood of them being released then.

The imprisonment of Ali Asanov is surely the most brutal, since Asanov and his wife have four very small children, the youngest of whom, Mustafa, was born two months after Asanov was taken into custody.

There need to be serious grounds for detaining the sole breadwinner of a family with small children and an invalid father.  There are effectively none, with the ‘court’ accepting the cynical arguments that since Asanov is a Ukrainian citizen, he could, supposedly, ‘abscond’ to mainland Ukraine if released.   The same ‘arguments’ are cited in all cases where the occupation regime is holding Ukrainian nationals imprisoned.

Chiygoz is charged with ‘organizing mass riots’ and could face a 15-year sentence, although all video footage shows him clearly trying to prevent confrontations. Asanov, Degermendzhy (and three other men not imprisoned) are accused of ‘taking part in mass riots’, with this carrying a sentence of from 2 to 8 years.

According to Asanov’s lawyer  Alexander Katelin, there is even a supposed ‘victim’, a pro-Russian demonstrator.  In fact, the video footage shows clearly that the alleged ‘victim’ threw a bottle with water which hit Asanov on the head, and that Asanov was too far away to hit him back.  Yet Asanov has been held in appalling prison conditions since April 2015 and is charged with ‘causing pain’ by hitting Ivkin, the alleged victim.  There is nothing to confirm that the blow even happened since Ivkin did not report it or seek medical assistance.

Asanov and Degermendzhy’s families say that both men were effectively offered their freedom for denouncing (and therefore giving false testimony against) Chiygoz.

Degermendzhy has stated repeatedly that he has no intention of betraying anybody.  His family, while wanting him home, stress that this was how he was raised, and can only be proud of his firm stand.

Asanov is no political activist.  His family returned from forced exile when he was a small child, and in independent Ukraine received land which they grew produce on and sold.  He had a family to support and Elnara says that he was basically always working.  He did, however, always heed calls from the Crimean Tatar Mejlis, or representative assembly.  It was the Mejlis who called on all Crimean Tatars and other Ukrainians to come to the main square outside parliament on Feb 26, 2014 to defend Ukraine.

Already from prison Asanov wrote to Akhtem Chiygoz saying that their arrest and trial might have one positive benefit since the repression had strengthened Crimean Tatar unity.

That certainly seems to be the case.  There has been huge response to journalist Lilia Budzurova’s impassioned plea to remember that “these are now our children” and take all the children of men unjustly arrested under their care.

Typically, Russia has moved to try to crush the unity which it perceives as a threat.  The ‘trials’ of Chiygoz on the one hand, and Asanov, Degermendzhy and three other Crimean Tatars were separated, with this clearly intended to minimize the unity and support shown the men.  Still worse, Chiygoz is prevented from even being present at his own ‘trial’, and is forced to communicate with the court by video-link from his cell.

For all the surreal absurdity of the trial, the court hearings are the only chance for Ali Asanov to catch at least a glimpse of his children, or even a precious moment or two close to them.  Degermendzhy is able to see his mother who has civic defender status, but only sees his father and younger sister at the hearings.

Ali Asanov, Mustafa Degermendzhy and Akhtem Chiygoz have been declared political prisoners by the Memorial Human Rights Centre, which rightly pointed out that Russia has no right to be prosecuting them at all.  Under such circumstances, there can be no question of them receiving a ‘fair trial’, and publicity is urgently needed.

PLEASE share information about the men with politicians and the press in your country.