Russian wanted for war crimes in Donbas arrested in Norway 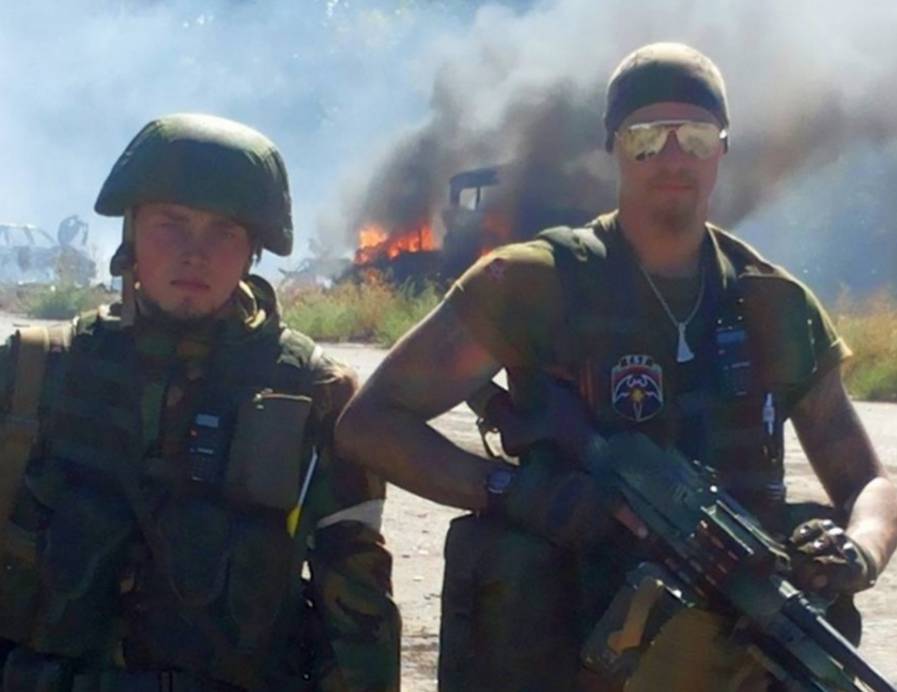 Yan Petrovsky, one of the notorious Russian neo-Nazi sadists who took photos of themselves over the bodies of Ukrainian soldiers they had mutilated has been arrested in Norway.  He will probably be deported to Russia, however Ukraine is reported to want his extradition.

The Norwegian police arrested Petrovsky on October 18, with the police giving him 2 days to decide whether to leave the country voluntarily.  The 29-year-old has often been referred to as a Norwegian, but it seems he only had a residence permit.  He had officially lived in the country since 2004, but certainly spent at least a year fighting in Donbas on the side of the Kremlin-backed militants.  The fact that he had spent too much time out of Norway is cited as one of the reasons why he has had the residence permit revoked.  Norway’s Police Intelligence Unit has, however, also confirmed that the move was out of consideration of “fundamental national interests”.

The move is probably over Petrovsky’s activities after he returned to Norway.  He was apparently living in Tønsberg with a Norwegian involved in the ‘Soldiers of Odin’ anti-immigrant movement and very clearly retains active links with neo-Nazi groups, including the Slavic Union which is now banned in Russia.  His lawyer has apparently said that they will protest against the move which he claimed was ‘politically motivated’.

Since Petrovsky has not been charged with any offence and is not a Norwegian citizen, it seems likely he will simply be deported to Russia.  Ukraine would certainly have grounds for wishing to prosecute him for war crimes, and none at all to believe that Russia would hand him over.

Petrovsky, who calls himself ‘Veliky Slavyan’ and fellow neo-Nazi from St Petersburg, Alexei Milchakov led the illegal armed formation ‘Rusich’ who took part in the fighting in Donbas from June 2014.

Milchakov had gained notoriety in Russia for his videoed torture and beheading of puppies and his calls to fellow neo-Nazis to kill down-and-outs and animals in St Petersburg.  Even Russian media sources were blunt in their assessment of one of the men who Russian President Vladimir Putin had claimed were following “the call of the heart” in going to Donbas.  Moskovsky Komsomolets, for example, reports that “A Fascist – Butcher from Petersburg has gone to fight for the insurgents”. The paper called him a “well-known Russian maniac”, nicknamed ‘Fritz’, who had gained notoriety in 2012 when the 20-year-old posted images of himself with a puppy whose head he cut off and ate.

In June 2016 Milchakov’s account  of how he and Petrovsky arrived in Donbas was posted by various militant networks, including that run by former Russian military intelligence officer and a key candidate for war crimes charges at the Hague Igor Girkin [Strelkov].  Various individuals, like him and ‘Slavyan’ [Petrovsky] were generously provided with arms and sent off supposedly with ‘humanitarian aid’ to Donbas.

There, both Milchakov and Petrovsky found new scope for sadistic tendencies, in their killing of Ukrainian soldiers.

On September 5, 2014, the ‘Rusich’ fighters ambushed and killed a column of Aidar Volunteer Battalion fighters near Metallist.  They are believed to have beaten and tortured those who had survived the original shootout, with none left alive.  The Russian neo-Nazis then photographed themselves against the men’s mutilated bodies.  Milchakov was seen cutting off the ear of one of their victims. The videos have all been removed from YouTube due to their monstrous content, however copies will certainly have been retained and will, hopefully, one day receive appropriate assessment from the International Criminal Court.  There remain taped interviews in which the men admitted to the actions, if not going into detail, and clearly view their involvement in the fighting as something to ‘boast’ about.

Russian pro-Kremlin media have been happy to interview both Milchakov and Petrovsky, though avoiding indiscreet questions about their neo-Nazi views, none of which the men see any need to conceal.  In April both men gave a skype interview in which Milchakov shared his opinion that the “mightiest potential lies in Russians” and that Ukrainians’ fight for freedom runs counter to the interests of his people.  Petrovsky, in turn, announced that they are “building a Russian national ‘Chechnya’ where everything will be only for the Russian people”. Both men are unfailingly viewed as ‘heroes of Novorossiya’.

‘Rusich’ was part of a bigger formation known as ‘Batman’.  In one of the rare moments when Luhansk militant leader Igor Plotnitksy has told the truth, he declared the formation to be a band of murderers and looters.  It’s leader Alexander Bednov [‘Batman’] and a large number of his men were killed at the beginning of January 2015.

Milchakov was clearly viewed as saying a bit too much since his interview for a pro-militant website soon after the Batman killings has now been removed.  As reported here, Milchakov and his cronies claimed that Batman’s cortege had come under attack  because Batman was getting in the way of Plotnitsky’s drug-trafficking racket.

In March 2015 both Petrovsky and Milchakov were part of a militant ‘delegation’ to a forum in St. Petersburg of members of mainly European and Russian far-right and neo-Nazi parties.

In September that year they acted as ‘instructors’ at a camp under the patronage of the former ‘prime minister of the so-called ‘Donetsk people’s republic’, another Russian with far-right views Alexander Borodai.  The training camp was for fighters from ‘Rusich’ and an organization called the E.N.O.T Corporation, and appears to be one of many such events, with some very young teenagers taught how to shoot and kill.

With respect to Putin’s ‘call of the heart’, in a skype interview, Milchakov made it quite clear that he and Petrovsky were paid for their ‘services’ in Donbas.  So, doubtless, were the others linked with ENOT who can be seen here.

Worth noting that Latvia has recently brought charges against at least one person who returned from a combat role in Donbas on the side of the Russian and pro-Russian militants.  Briton Ben Stimson is on trial in the UK on charges under the Terrorism Act for his believed role in the fighting.

Meanwhile Russian state-controlled media and politicians have joined the militant formations Russia is heavily arming and manning in Donbas by treating another Russian mercenary Arseny Pavlov [Motorola], killed by a bomb planted in a building heavily guarded by the militants, as a hero.  Unlike Motorola, Milchakov, Petrovsky, Girkin and other Russians could still be put on trial for war crimes.  They are unlikely to while others, no less deserving of such charges, retain their grip on power in Russia.