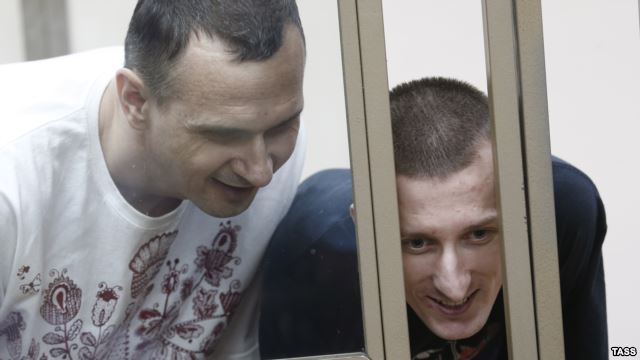 The Russian prison authorities in Yakutia have placed Ukrainian filmmaker Oleg Sentsov in an isolation cell for 15 days.  His cousin Natalya Kaplan knows no details but has also just received threats directed at Sentsov on Facebook and is understandably concerned.  All of this comes after the news on Oct 21 that Russia’s Justice Ministry has refused to return Sentsov and civic activist Oleksandr Kolchenko to Ukraine, claiming falsely that the two men are Russian citizen.  This position has been rejected by Russia’s own Human Rights Ombudsperson and Russian prosecutor, and is clearly a pretext to turn down the extradition request. That news in turn followed a clear indication from the Kremlin that it is denying its obligation under the Minsk Agreement to release Sentsov, Kolchenko and all Ukrainians illegally held.

The 2 letters from the Justice Ministry, dated Oct 7, claim that Sentsov and Kolchenko received Russian citizenship after Russia’s annexation of Crimea, and that, according to Russian law, in the case of dual nationality, a person is regarded as Russian.  This is directly stated as the reason for refusing to extradite them to Ukraine.

In March 2016, the outgoing Ombudsperson Ella Panfilova confirmed in her annual report that Sentsov and Kolchenko are Ukrainian citizens. She possibly got into trouble over this as a new statement appeared on the site on April 11.  This confirms their Ukrainian citizenship, but also outlines the reason for Russia’s claim that the men – against their will – ‘automatically became Russian citizens’.  The statement makes it clear that this position is not shared by the Ombudsperson.

The justice ministry has not provided any proof of the two men’s Russian citizenship, which is hardly surprising since neither would have signed the relevant documents. Russian human rights activist Zoya Svetova has produced a copy of the prosecutor’s indictment from June 2015 which identifies both men as Ukrainian, giving details only of their Ukrainian passports.  Had they possessed Russian citizenship, this would have been given as taking precedence.

The agreement cited as grounds for foisting Russian citizenship on Crimeans would almost certainly not be regarded as a legally binding document by the European Court of Human Rights or international bodies, since it is between Russia and the ’leaders’ whom Moscow used armed Russian soldiers to install.  According to the agreement, Ukrainians who did not formally indicate their rejection of Russian citizenship were regarded as having ‘become Russian’.  There was little publicity for this requirement, people were given a mere month and had to appear in person at 3 offices for the entire peninsula.  It is also likely that many Ukrainians would not on principle have agreed to go through such a procedure.

Only one of the four opponents of Russia’s invasion arrested in May 2014 – Oleksiy Chirniy – had formally rejected Russian citizenship.  For a long time Russia even claimed that the other three – Sentsov, Kolchenko and Gennady Afanasyev (who has since been exchanged) were Russian nationals, and not Ukrainian.  This has been repeatedly used as a pretext for refusing them visits from the Ukrainian consul, and is a grave breach of their rights.

Kolchenko has, via his lawyer, lodged an application with the European Court of Human Rights over the attempts to deny him his citizenship, and all three men have repeatedly rejected the claims that they have somehow become Russian nationals.

“I also wish to protest against the attempts to deprive me of Ukrainian citizenship.  I have always been and remain a citizen of Ukraine.  I do not recognize the Russian Federation’s annexation and military seizure of  Crimea. I consider any agreements made by the illegitimate government of  Crimea with the Russian Federation invalid.  I am no serf to be passed over together with the land.  I have not written any applications to take on Russian citizenship and reject my Ukrainian citizenship. “

It was suspected from the outset that Russia’s apparent willingness to consider extradition procedure was in fact just a delaying tactic.

On Oct 20, a day after Russian President Vladimir Putin took part in new talks with the leaders of Ukraine, France and Germany, his Press Secretarystated that Putin does not agree that the release of prisoners held in Russia falls under the Minsk Agreement.  There are numerous international documents calling for the release of the men in accordance with precisely that agreement.

Putin has consistently behaved and talked like a kidnapper and is quite openly using the Ukrainians as hostages.

The four Ukrainians, all of whom had openly opposed Russia’s annexation of Crimea, were arrested in May, tortured and taken illegally to Moscow.  After almost 3 weeks (probably to conceal signs of torture) the FSB publicly accused the men of ‘a terrorist plot’ and state television broadcast ‘confessions’ from Afanasyev and Chirniy.

There was no evidence of ‘terrorism’ against any of the men, and there was nothing at all against Sentsov.  The other three had taken part in very minor attacks on a pro-Russian organization’s office in the middle of the night.

The two who initially ‘confessed’ were tried and sentenced to 7 years in total secrecy and Sentsov and Kolchenko’s lawyers were forced to agree to not divulge any information before the trial.

From the first day of the trial in the middle of 2015 it became clear that there was literally nothing against Sentsov and Kolchenko.  Each court hearing was more absurd than the previous one.  Then on July 31, Afanasyev appeared in court and found the courage to state clearly that his testimony had all been a lie and tortured out of him.

That was ignored, as was the lack of any evidence and absurdity of the charges.  Sentsov was sentenced to 20 years, Kolchenko to 10.  The two men responded appropriate to this travesty of justice by joining arms as the sentences were read out and singing Ukraine’s national anthem.

PLEASE write to politicians in your country and ask them to demand that Russia honours its commitments and releases the Ukrainians it is holding hostage.

And WRITE LETTERS OR POSTCARDS!  Even just a word or two will send an important message to the men themselves, and to Moscow, that they are not forgotten!

If it’s a problem to write in Russian, even the following, maybe with a nice photo, etc. would be good.