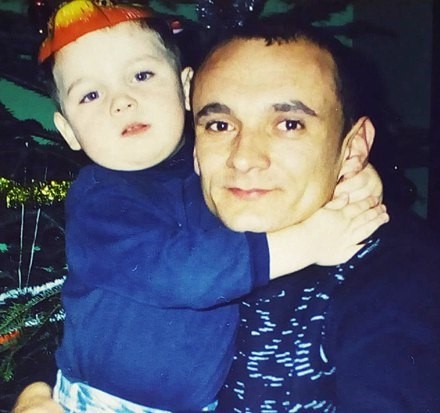 Maidan activist Mykola Shyptur has been held prisoner in Russian-occupied Crimea since March 9, 2014, but his case has only just come to light now thanks to human rights activists who noticed the clear political elements in an alleged criminal conviction. The story is a shocker which highlights the abuse of the courts and media since Russia’s invasion and annexation of Crimea. It is particularly illuminating to see the way historic events recorded by the world media have been totally distorted to fit the occupation regime’s narrative.

The following is mostly based on the report by Maria Tomak who was herself alerted to Shyptur’s plight by colleagues from the Ukrainian Helsinki Human Rights Union.  They have recently begun providing legal accompaniment to his case.

Mykola Shyptur is 38 and from Ivano-Frankivsk.  He and his wife Yulya have one son, Serhiy, who is now 11, and has not seen his father for two and a half years.  The family had spent some years in Spain but had returned to Ukraine before Euromaidan began.  Shyptur was not a political activist, but he obviously decided he could not sit passively and he spent time on Maidan, mainly helping to guard the seized Kyiv City Administration building.

Russian forces had seized control in Crimea on Feb 27, 2014, with the marginal pro-Russian leaders installed at gunpoint declaring an illegal ‘referendum’ on joining Russia.  While the ‘little green men’, as the soldiers without insignia were dubbed, largely waved Kalashnikov rifles without using them, they were backed by the so-called ‘self-defence’ armed paramilitaries. Led by people like former Russian military intelligence officer Igor Girkin [Strelkov], these paramilitaries were considerably more violent.  It was they who abducted and tortured to death silent protester Reshat Ametov, and abducted and tortured many other activists. It is likely that at least some of the people who disappeared without trace in 2014 died at the hands of the paramilitaries.

Shyptur and three other Maidan activists (Serhiy Tkachuk, Vladislav Polishchuk – a doctor, and Olha Chernyatynska) set off for Sevastopol three days before a planned pro-Ukrainian rally marking the 200th anniversary of the birth of the Ukrainian poet Taras Shevchenko on March 9.  They hoped that their experience on Maidan would enable them to help protect the pro-Ukrainian demonstrators, and if necessary, provide medical care.  A local activist had rented a flat for them, and they spent the first two nights posting leaflets that they had brought from Kyiv, explaining what a farce the so-called referendum was.

From 9 March, there are two entirely divergent versions of events.  Ben Brown and a BBC crew were present at the pro-Ukrainian rally which was entirely peaceful until “pro-Russian demonstrators – young men and Cossacks with whips” appeared.  Although it is clear that the verbal altercations were two-way, the violence described and which led the BBC to fear for their own safety was solely from the pro-Russian demonstrators.  In the video here, Shyptur can be seen trying to calm people down.

He was slightly injured, and Tkachuk received a bad rib fracture and other injuries.  The four activists decided that they needed to lay low since they were aware that the ‘self-defence’ paramilitaries had seen their faces and could recognize them.

What happened next is at very least odd. Chernyatynska suddenly announced that she was going for a walk and left.  She rang soon afterwards, saying that she had been caught by the paramilitaries and asking them to come and rescue her.

Shyptur hurtled out.  He unfortunately, but understandably grabbed the gun he had brought to Crimea with him without saying anything to the others. He found Chernyatynska close by, surrounded by around 4 men, with a further 5 paramilitaries then appearing.  The men demanded to be taken to their flat, and since the 2 activists were heavily outnumbered, they began walking in that direction. However, then Shyptur motioned to Chernyatynska to run and himself tried to get away.

Hoping to frighten his assailants off, he fired several warning shots, but was soon caught and savagely beaten.  There and then they used torture methods – breaking his fingers, an electric shock gun, etc. to try to find out where their ‘headquarters’ were.  He seems to have held out, however Chernyatynska led the paramilitaries to the flat.

A pro-Russian version of events was shown on local TV, with the paramilitaries telling a police officer about how they had “detained” the young woman and how Shyptur had started shooting.  The Maidan doctor’s medicines are referred to then as “drugs and acid”, and in later reports as “toxic substances”.  The report here also merges all events that day and claims that the Maidan activists were guilty of “provocation”, and that Shyptur had opened fire at the ‘self-defence’ paramilitaries.

In fact, the appearance of the police officer, called after somebody heard the gunshots, may have saved Shyptur’s life, and perhaps that of the others.  The events were seriously distorted, but were recorded, and this, it seems, prompted the police to remain firm when the paramilitaries tried to get them to simply hand over the Maidan activist.

The other two men were very badly treated, but were finally released, together with Chernyatynska.  Shyptur was, however, subjected to a kind of pseudo ‘criminal investigation’, and then ‘trial’.

With supreme irony, the FSB who then came onto the scene to interrogate Shyptur claimed to be ‘anti-terror’ officers.  They turned up again in May, trying to get him to give false testimony against Ukrainian filmmaker Oleg Sentsov whom the FSB had just arrested.  Shyptur refused.

A year later, on April 28, 2015, judge Volodymyr Sybula from the Gagarin District Court in Sevastopol court sentenced Shyptur to 10 years’ maximum security prison.  He was convicted of illegally transporting weapons and of the ‘attempted murder of persons carrying out their official duties or civic duty’.  One of the paramilitaries was given ‘victim’ status in the ‘investigators’’ version of events.  Rather than saying that Shyptur had tried to flee likely assailants, the court ruling uses language suggesting that he tried to hide from the scene of a crime and that he then “took the criminal decision to kill” the alleged victim (Kulish).

The appeal against Shyptur’s conviction was heard by another occupation court on June 16, 2015.  This court dropped the illegal transportation charge and therefore reduced the sentence by one year.  Since then he has been held in Prison Colony No. 1 in Simferopol.

It is certainly true that Shyptur fired shots, but he did have serious grounds to fear for his life and that of Chernyatynska’s.  This would undoubtedly have been recognized by the BBC TV crew who reported feeling threatened by these same violent paramilitaries.

This was not acknowledged by the court whose ruling is full of the anti-Ukraine propaganda being pounded by Russian media at that time and which chose to accept that the paramilitaries had been “carrying out their civic duty”.

Among multiple reasons why this story is disturbing, it is that justification of violent paramilitaries that is profoundly offensive.

Other paramilitaries are clearly recorded on video abducting Reshat Ametov after taking him by force from his lone picket on March 3.  There has never been any serious attempt to apprehend the men guilty of his horrific murder, nor to even find their many other victims.  Had it not been for the shots fired into the air, it is likely that Shyptur would have faced the same fate.  Instead events were turned on their head and he became Russia’s first political prisoner in occupied Crimea.  There are now many more.