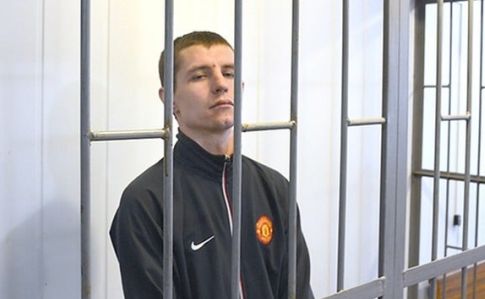 Having failed to prevent Euromaidan, Russia is avenging itself on individual activists, including through surreal court trials in Russian-occupied Crimea for alleged actions over which it can have no jurisdiction.  The 10-year sentence just upheld against 23-year-old Andriy Kolomiyets has demonstrated that any Ukrainian who took part in Maidan is not safe in occupied Crimea or Russia.

Kolomiyets was sentenced on June 10, 2016 to 10 years’ maximum security prison, with the main charge being over an unproven and unprovable alleged action in Kyiv in February 2014.  The other charge is less overtly illegal, yet no less convincing, and the authoritative Memorial Human Rights Centre has already declared Kolomiyets a political prisoner.

Despite the absurdity of the charges, nobody seriously expected the Russian-controlled Crimean Supreme Court, sitting on Oct 27, to overturn the sentence.  The court hearing was in Ukrainian, but this clearly didn’t help remind judge Halyna [Rus. Galina] Redko of the oath she once gave to serve Ukraine.  Redko did not even bother to go into the chamber room before rejecting the appeal.

The Crimean Human Rights Group notes that Redko has already taken part in another prosecution of equivalent lawlessness by constantly extending the detention of Crimean Tatar leader Akhtem Chiygoz.

Kolomiyets was sentenced to 6 years for something described as ‘attempted murder’ of two Ukrainian (Crimean) Berkut riot police officers during Euromaidan in Kyiv and to 4 years for supposedly transporting hashish.  Memorial HRC has dismissed the first charges which Russia has no jurisdiction over, and believes that the second is likely to be based on planted evidence.

It was claimed that he had thrown a Molotov cocktail at two Berkut officers who had shifted allegiance after Russia’s invasion of Crimea, but who were at the time Ukrainian nationals.  This alleged action had ‘caused them pain’.  Enough ‘pain’ to allow them in court to claim that they remembered Kolomiyets, though not enough for them to have reported it to anybody at the time.  The prosecution was under Article 30 § 3 and 105 § 2 of the Russian Criminal Code, namely “attempted murder of 2 or more people in connection with their official activities … out of motives of political and ideological hatred”.

The young man who is from Kyiv oblast was arrested in the Northern Caucuses of Russia on May 15, 2015, where he was living with his partner Galina Zalikhanova and her four children.

When officers turned up on May 15, the first thing they said to Zalikhanova was that Kolomiyets was a Maidan activist.  During the search, they found a small package with some hashish in her ex-husband’s safe.  New testimony was presented at the last court hearing which confirms that Kolomiyets did not have access to that safe.

The story with the ‘drugs’ that Kolomiyets is accused of possessing is absurdly implausible.  Zalikhanova understood not to touch the planted ‘evidence’ and the police were finally forced to leave without recording the hashish in the protocol.  This was witnessed by a woman who was staying in their place.

The charges over Maidan were laid shortly after those for “possession of drugs in a large quantity It is worth noting that the use of a second charge, over something almost certainly planted, was first used against Oleksandr Kostenko, the first Maidan activist to have been tried on charges linked with Maidan.

There are other parallels between the cases of Kostenko and Kolomiyets, including the allegations (and evidence) of severe torture.  In Kolomiyets’ case this included the use of asphyxiation and electric shocks.

Natalya Poklonskaya, the former de facto prosecutor, installed after Russia’s invasion, had earlier threatened as many as 50 such ‘trials’, all with the use of the same Berkut turncoats.

It remains unclear whether these are planned, but Russia is already demonstrating the same disregard for fundamental principles of law and Russia’s own Criminal Code (Article 12 § 3) in the prosecution of Crimean Tatar leader Akhtem Chiygoz, Ali Asanov and Mustafa Degermendzhy who are in effectively indefinite detention on charges linked with a pre-annexation demonstration.

Please write to Andriy Kolomiyets.  Letters, however, short show him – and Russia – that he is not forgotten.

Letters need to be in Russian, and on totally ‘innocuous’ subjects.  If that is a problem, please just copy-paste the message below