Assets On Parade: Ukraine Officials Made To Declare Their Bling 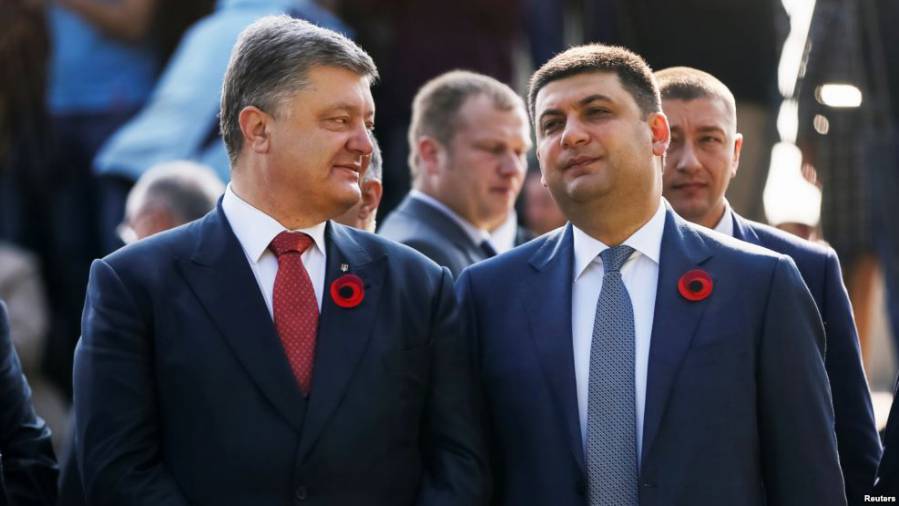 The new e-declarations has finally given Ukrainians an opportunity to assess the wealth of senior public servants such as President Petro Poroshenko (left) and Prime Minister Volodymyr Hroysman (right).

Fast cars and fancy watches. Faberge eggs and vintage wine. Prime real estate, including a church. Even a ticket to space.

Along with many millions in cold, hard cash, they’re just some of the items emerging from the latest effort to root out persistent corruption in Ukraine.

Officials there had until midnight on October 30 to file online asset declarations meant to expose those who got rich from misconduct. Most of the 50,000 or so public servants targeted by the requirement -- including civil servants, politicians, and judges -- are thought to have complied.

But as with so many things in war-torn Ukraine, there’s more to the asset declarations than meets the eye.

For instance, Serhiy Melnychuk, a former commander of the volunteer Aidar fighting battalion turned lawmaker, thumbed his nose at the new measure, declaring 1 trillion hryvnyas, or about $39 billion, in cash. Asked about the disclosure, his spokesperson told local media simply, "It’s a bad joke on his part."

Many Ukrainians aren’t laughing, however. Perceived excesses in lawmakers’ lifestyles -- ill-gotten or not -- have drawn condemnation in a country where government statistics put the average household monthly income at around $200.

Ukraine’s mega-rich have also been criticized for not doing more to help soldiers, who are paid just $276 a month and have largely relied on volunteer assistance throughout the 30-month conflict against Russia-backed separatists that has killed nearly 10,000 people.

"[W]e collect money for socks for soldiers, in [a] parallel world [people] have [millions] $ in cash," Ukrainian activist Kateryna Kruk tweeted. "E-decl [-arations] make us realize what corruption really is."

Ukraine’s newly created anticorruption agencies are now expected to investigate suspicious declarations -- a task that could take considerable time, given their limited resources and the fact that many thousands were filed.

But it’s a step that reformers insist must be taken.

Officials who cannot explain where their fortune came from face possible jail time.

Some of the most notable declarations include those of Ukrainian President Petro Poroshenko, Prime Minister Volodymyr Hroysman, and Interior MinisterArsen Avakov. All are known to have amassed considerable wealth prior to taking office, but the public has not previously been allowed to see the extent of their wealth.

"As for my e-declaration, I’d like to note straightaway that all the valuable movable and immovable property -- housing, estates, cars, paintings, women’s jewelry -- had been purchased (not leased) before my presidency. In addition, mainly the property was acquired when I was not a public servant," Poroshenko wrote on his Facebook page a little more than one hour before the deadline on October 30.

Hroysman, who has been in public service for the past 14 years, declared that he and his wife have some $1.8 million in cash. He also said that he owns a collection of 12 luxury wristwatches.

Avakov’s declaration includes hundreds of thousands of dollars and euros in cash, as well as large collections of paintings, clocks, Italian furniture, valuable books, and vintage wines worth millions of dollars.

There were some oddities among the declarations.

Lawmaker, Radical Party leader, and onetime presidential candidate Oleh Lyashko declared a pricey collection of watches, as well as a "peasant pitchfork" -- a symbol of his Radical Party that he has posed with on billboards.

Anatoliy Matviyenko, a lawmaker with the president’s Petro Poroshenko Bloc, declared a church.

And Dnipro Mayor Boris Filatov disclosed that he is the owner of a ticket for a suborbital space flight with Virgin Galactic that he purchased in 2009 for 1.4 million hryvnyas.


The e-declaration site is publicly available.

The Euromaidan unrest that eventually unseated then-President Viktor Yanukovych in 2014 was fueled by perceptions of massive corruption, in addition to fears that Yanukovych was turning his back on the European Union in favor of closer ties to Russia.

Western officials and international financial institutions have also warned that Kyiv needs to enact reforms and curb corruption if it hopes to continue to receive the billions in assistance that have helped keep the country afloat since Russian troops invaded and seized Crimea from Ukraine in early 2014.