Why a Trump Victory Would Put Ukraine in Danger. In Trump’s Own WordsMark it down, Mr Trump, Russia has already gone into UkraineNo surprises as Trump says he could recognize Crimea as ’Russian’ & lift sanctionsA British Foreign Secretary who excuses Russia’s invasion of Crimea?Kremlin’s Donbas proxies congratulate UK for ’doing what they did’ & voting for BrexitBrexit a gift to Putin, the far right & Trump, a blow to democracyEx-Mayor of London Boris Johnson blames Russia’s annexation of Crimea on the EUWhat European Values if Dutch Referendum Result Stands?Appeal by the leaders of Ukrainian national communities to the Dutch populationFormer Soviet political prisoners call on Holland to say yes to Ukraine’s European futurePlaying with fear and ignoranceHow a democratic tool became a threat to democracyUkrainian Jewish leaders appeal to Holland: Give our country the chance to break with the pastDutch referendum puts Ukraine in spotlightMake Russia’s open interference a Pyrrhic Putin - Trump victoryNo ‘G8’ until Russia ends its occupation of Crimea & frees all Ukrainian hostagesRussia forced to withdraw trumped-up charge against Crimean Tatar activistWith Trump on his side, Putin admits Russia staged the ‘referendum’ to annex CrimeaIf Putin admitted Crimea is Ukraine, why would Trump recognize illegal Russian annexation?The Moneyed Professor: Putin’s Dissertation Adviser Reportedly Now A Billionaire
• Topics / Politics and human rights
• Topics / The right to life

Why does Donald Trump cover up Putin’s involvement in murder? 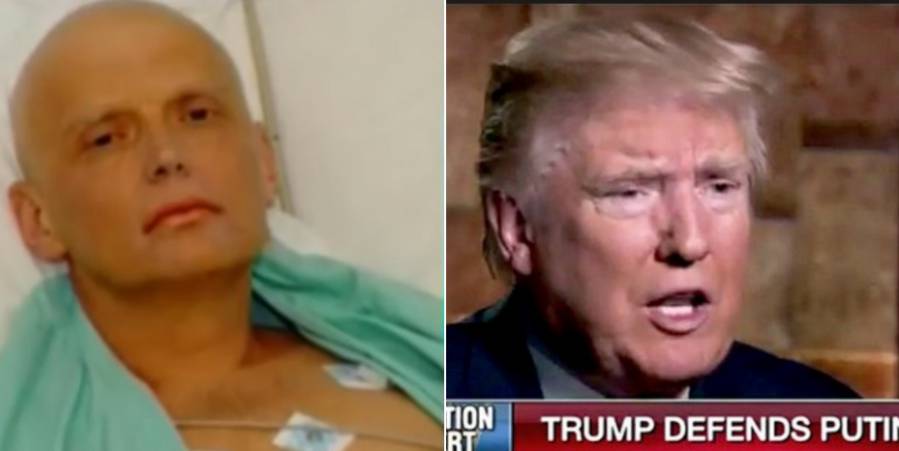 Donald Trump is not particularly known for respecting the principle that you are innocent until proven guilty. He has openly threatened to imprison his rival, Hillary Clinton and back in 1989 he publicly called for the death penalty in the case of 5 teenagers, one of whom was only 15.  The ‘Central Park Five’ were innocent, and have been thoroughly exonerated by a US court, yet Trump continues to deny both the court and DNA evidence and claim that they were guilty.

The fact that a presidential candidate should be willing to override the courts is profoundly disturbing.  No less so that he makes one extremely strange exception, which also flies in the face of court judgements and foreign intelligence.  He seems willing to let Russian President Vladimir Putin get away with murder – and quite literally.

Litvinenko was a former FSB [Russian security service] officer who had been given political asylum in the UK.  He was the co-author of a book entitled “Blowing up Russia: Terror from Within’, which accuses the FSB of being behind Russian apartment block bombings in Moscow and other cities in September 1999 which killed 307 people.  The authors alleged that the bombings were aimed at raising Putin’s popularity after Boris Yeltsin’s handover of power to him. There were rumours to this effect from the start and some very incriminating behaviour from the FSB.  The book was formally banned in Russia in May 2015, being placed on Russia’s huge list of so-called ‘extremist’ materials.  An Internet site was also forced to remove the publication.

Litvinenko was killed exactly 10 years ago this month.  He died a hideous death on Nov 23, 2006, after being poisoned on Nov 1 with radioactive polonium 210.

It was probably by chance that a scientist recognized the symptoms, but once Scotland Yard knew what to look for, it proved extremely easy to track down the believed murderers – Andrei Lugovoi and Alexei Kovtun -  as they had left a trail of radioactive polonium in all the places they visited, where they met with Litvinenko and even in the seats they occupied on the British Airways plane that took them back to Moscow.  Lugovoi was mentioned as key suspect very soon, but Britain’s request for his extradition was rejected, and in September 2007, Lugovoi was elected to the Russian state parliament and remains an MP.

The use of polonium-210 precluded any possibility that the murderers could have obtained the poison on the black market.  The way the trail seemed to clearly lead to FSB and those in high positions in Russia was doubtless one of the reasons why the British government spent years avoiding the crucial inquiry which finally ended on Jan 25, 2016.  In presenting his findings, Sir Robert Owen stated clearly that President Putin had probably approved the killing.

There had been extensive coverage in the media about the hearings, and it was mainly the Russian media that went into overdrive denying the claims.

Mainly, but not only, since the then potential Republican candidate Donald Trump also dismissed the allegations in a Fox interview, claiming that he didn’t know if it was Putin, and that there was huge doubt about this.  “Many people say it wasn’t him. So who knows who did it?"

There is certainly no smoking gun leading directly to the Kremlin.  Even the fact that Putin saw fit to honour Lugovoi in March 2015 “for courage and daring demonstrated in carrying out work duties in conditions linked with risk to life” cannot be called more than dead suspicious.

Aside from Trump, it is, however, only Moscow and Kremlin-loyal media who are seriously pushing the idea that there are multiple versions, with each equally possible (including that Litvinenko “poisoned himself”).

Trump was equally reluctant to take a stand over Russia’s clear involvement in the downing of Malaysian airliner MH17 over militant-occupied Donbas on July 17, 2014.  Asked about the Dutch investigators’ report which found that the airliner was shot down by a Russian-made rocket and warhead, he first stated:

"They say it wasn’t them.  It may have been their weapon, but they didn’t use it, they didn’t fire it, they even said the other side fired it to blame them. I mean to be honest with you, you’ll probably never know for sure."

Even when forced to acknowledge that it “probably was Russia”, he still goes on to say that “it’s terrible, but we really probably won’t know for sure. And you’ll probably never find out”

This is exactly what Putin wants to hear, and what the Russian media is constantly telling their audience, but can this seriously be coming from a person seeking to enter the White House?

What else would be tolerated?

A great deal of what Trump would be willing to turn a blind eye to has been seen in his comments since Russia’s invasion of Crimea and military aggression in Eastern Ukraine.  Trump has praised Putin as ‘so smart’ for this aggression and violation of international law.  In July this year, he stated clearly that he would be looking at removing sanctions against Russia and recognizing Crimea as Russian.

It is not enough to point to certain advisers with known links to Russia, since it is Trump who chose Paul Manafort, Carter Page, Boris Epshteyn and others.

There are very likely to be financial reasons for such unwillingness to say anything critical of Russia, but again we can’t know, since Trump has refused to release his tax returns.

There is, of course, one other reason but this is hardly any more cheering.  Trump suggests in the above-mentioned Fox interview and in the NBC interview here where he was entirely unperturbed by Putin’s killing of journalists and political opponents and invasion of Crimea that he is praising Putin because Putin has praised him.

Russia very clearly has reasons for ‘praising Trump’ and seeking a Trump presidency and is using cyberattacks to interfere with the US elections.  In a Newsweek article just published, Kurt Eichenwald has gone into detail about the interference and Russia’s likely motives in wanting to undermine NATO.

In much the same style as over the murder of Litvinenko and MH17, Trump has repeatedly denied such interference, effectively rubbishing both US and foreign intelligence.

Without knowing why, it is impossible to know how much more Donald Trump would chose to deny – a terrifying risk to national and European security.