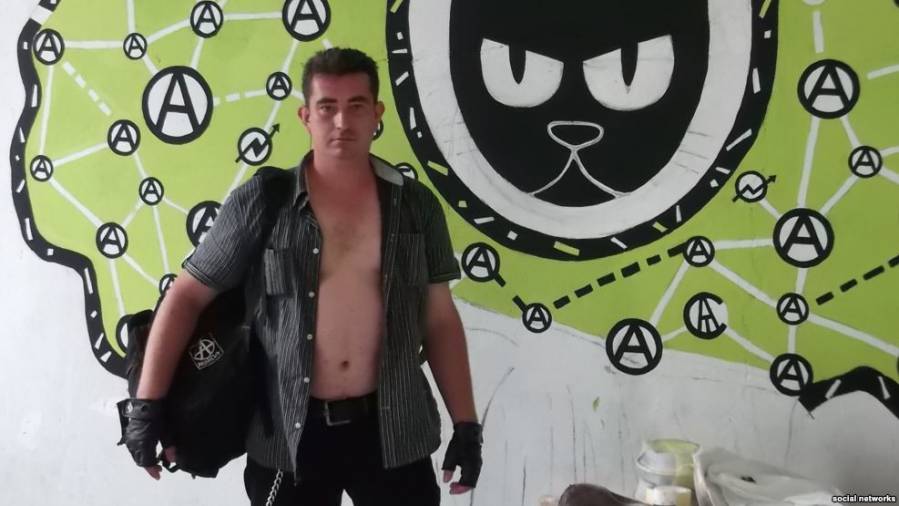 Serhiy Vasylchenko, an anarchist from Yevpatoria in Russian-occupied Crimea, has been jailed for 10 days, purportedly for ‘circulating material of an extremist nature’.  While it is nowhere indicated what the ‘extremist’ material was, the young activist’s troubles began 2 months ago after he joined calls to boycott the illegitimate parliamentary elections which Russia had insisted on holding in Crimea.

On September 16, police interrogated Vasylchenko, then carried out a search of his flat, taking away his ID and other documents and technology.  In an appeal circulated on social networks, he wrote that he had been forced under threat of torture to admit to having written graffiti calling on people to boycott the Russian parliamentary elections, and then posted photos of the graffiti on his VKontakte social network page. The police officers had threatened to hand him over to the Russian FSB, he wrote, saying that they would take him to Lubyanka [the notorious former KGB, now FSB headquarters in Moscow] and torture him.  They had not used physical force, but the threats of arrest and what he could face had forced him to go into hiding, he explained.

Radio Svoboda’s Crimean Service reports that three cars with plain-clothed police turned up at his parents’ home on Nov 3.  His father, who is disabled, refused to allow the men in without a warrant.  At that point, Serhiy’s mother says, one of the officers pulled out a gun and started threatening Mr Vasylchenko, who told him he could shoot if he wanted, since he wouldn’t be allowed in otherwise.

The police returned with a warrant and claimed to be searching for ‘weapons and drugs’.  They found only books, yet still took Mr Vasylchenko’s computer away ‘for checking’.

Serhiy Vasylchenko was detained after this and taken to the so-called Centre for Countering Extremism in Simferopol.  After that a local court under occupation in Yevpatoria on Nov 4 ordered that he be jailed for 10 days.  He is currently held in a police temporary holding unit.

This is not the first time the activist has come into conflict with the occupying regime.  He was one of 7 people who on July 2 this year tried to hold a totally peaceful picket calling for the release of Oleg Sentsov, Oleksandr Kolchenko and other Ukrainian political prisoners held in Russia.  They were immediately surrounded and harassed by police officers, though on that occasion only Alexei Shestakovych, who had organized the picket, was detained and fined 20 thousand roubles.

Shestakovych’s unsuccessful appeal against the unwarranted fine on September 20 coincided with another court prosecution that clearly demonstrated how any pretext will do for harassment of activists.  A separate occupation court fined Shestakovych 1 thousand roubles for a video he reposted 4 years before Russia invaded and occupied Crimea.  On the same day, another court in Simferopol rejected his appeal against a 20-thousand rouble fine for a totally peaceful picket in defence of political prisoners.

Russia is increasingly using repressive methods against anybody who opposes, however peacefully, its occupation of Crimea.

Vasylchenko was certainly not alone in calling for a boycott of the elections in occupied Crimea.  Although the parliamentary elections in Russia were marred by gross vote rigging, the reason for the boycott in Crimea was different.  Russia is illegally occupying Crimea, and the elections were, by definition, illegitimate.  In early September Crimean Tatar Mejlis leader Refat Chubarov called on all Crimeans to boycott the elections.  His appeal coincided with a Ukrainian parliamentary resolution asking the international community to join Ukraine in not recognizing the elections in Crimea.

This, in fact, they all have.  It is likely they would have anyway since they so clearly breached the position on Crimea set out in the March 27 UN General Assembly resolution.  That unequivocally urges all countries, organizations, etc. to refrain from any action that could be construed as recognition of Russia’s occupation.

The occupation authorities used all kinds of coercion and threats to get people to attend, seemingly without much effect with the turnout reported to have been very low.