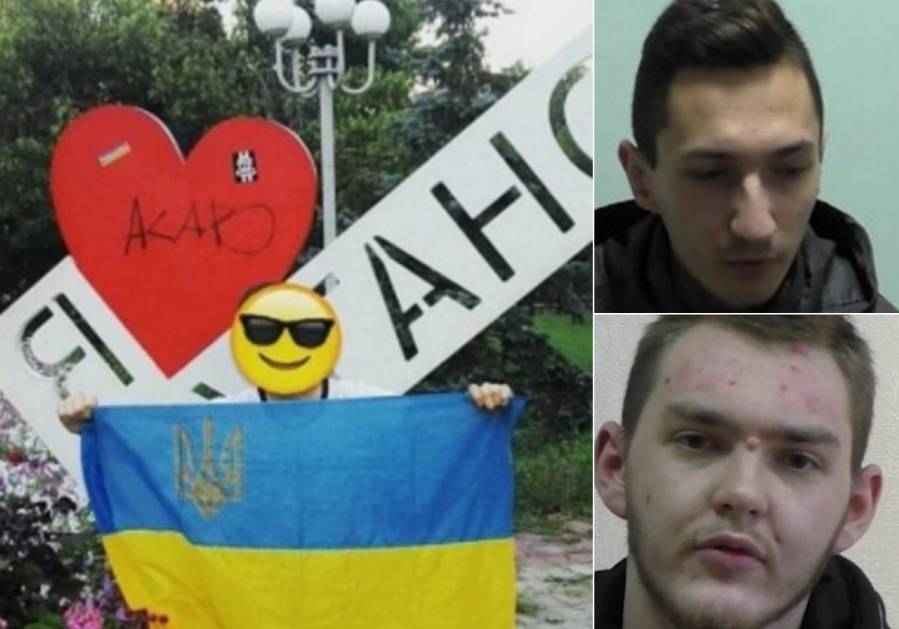 Kremlin-backed militants who have been holding two young Luhansk football fans prisoner for a month have suddenly announced their ‘arrest’ as though it happened on Russia’s ‘National Unity’ Day.  It is not only the timing, but also the supposed ‘plot’ uncovered that seems suspiciously adapted for the Russian media. All of this is particularly chilling given that the militants are accusing two young Luhansk men - 20-year-old Vlad [Vladislav] Ovcharenko and Artem Akhmerov (19) - of ‘state treason’.

Concern was already high since Ovcharenko was known for the photos he posted in late August with a flag of Ukraine – an act of courage in areas controlled by Kremlin-backed militants.  He had also recently communicated with Julian Röpcke, a correspondent from Germany’s Bild newspaper, to whom he had not hidden his opposition to the so-called ‘LNR’.

On November 5, most Russian media reported the supposedly uncovering of ‘an underground radical neo-Nazi group’ in Luhansk.  All of them quoted the ‘LNR Ministry of State Security’ without mentioning that LNR is a self-proclaimed body which even Russia has not recognized.  Russia’s state-controlled media take orders from above on how to present the militants and conflict, and just a few months ago were using the term ‘self-proclaimed’ which has now been dropped.

This so-called ministry announced that they had uncovered a group of football fans from the football club ‘Zarya’ ‘Ultras Chorno-Bili’.  They have supposedly established that a “radical neo-Nazi group, an underground division of the Azov Battalion” had been created in Luhansk.  Ovcharenko and Axmerov are claimed to have been its leaders and are now charged with the so-called LNR criminal code with ‘state treason in the form of espionage’.

They are alleged to have been recruited by a Ukrainian military intelligence officer with the code name ‘Big and Mean’.  The ‘investigators’ have supposedly uncovered the transfer of information constituting a state secret, as well as possession of symbols of the Azov Battalion, Right Sector as well as of the football club, and “circulation of neo-Nazi literature and leaflets with calls to overturn the constitutional structure of the republic.  Their activities were financed by the Ukrainian security service and Ukrainian far-right organizations.”

Most disturbingly, the report ends by saying that they are carrying out a check as to whether members of the group were involved in “directing artillery fire on Luhansk in 2015; in the mass killings on Maidan in Kyiv, in the Odesa Trade Union House and in provocation and attacks on activists during the referendum for LNR independence”.   All of this is propaganda music to Russian media ears. For example, there were no mass killings at the Odesa Trade Union House on May 2, 2014.  There was a tragic fire, however the Kremlin and Russian media have been pushing a ‘massacre narrative’ for the past two years.  The other claims are equally absurd, especially given that any ‘check’ would be about young lads who would have both been underage at the time.

Leonid Pasechnyk, referred to as the head of the ‘LNR security service’, claimed in his turn that the young men “were engaged in subversive activities”, “incite inter-ethnic enmity and provoke mass anti-social manifestations and riots”.  He spoke of up to 32 members of this supposed group.

The ‘evidence’ shown in the video – a ream of A4 sheets, for example, with Azov symbols copied seems less than convincing.  So too does Pasechnyk’s only example.  He claims that in August 2015 members of the group shot a video in which they called on people “to undermine the LNR constitutional order and burned the state flag of the republic”.

There is no independent evidence of this, and, as is always the case with such stories of ‘arrests’ – both those by the militants and arrests of Ukrainians in occupied Crimea or Russia by Russia’s FSB – the details are backed solely by ‘confessions’.  Young men totally under the control of the militants will say what is demanded of them, for obvious reasons.

The LNR website shows ‘confessions’ from Akhmerov, as well as testimony from two other young people, one supposedly the girlfriend of one of the arrested men.  She in fact does not say very much.  She claims that they wanted to earn money, and mentions – as something she allegedly disapproved of – the one act which Ovcharenko is known to have been involved in, namely the selfies with the Ukrainian flag and a sign saying ‘I love Luhansk’.

Hours after the original reports were posted, an apparent video appeared on the same site of Ovcharenko speaking, though it does not start when clicked.  The militants claim that Ovcharenko names those directing his activities from the Ukrainian security service.  He purportedly took orders and received money “for gathering and passing on information of a socio-economic nature’.

The Azov Battalion has taken over from the ultra-nationalist Right Sector in being heavily demonized by Moscow and the Russian media.  The significance of both in Ukrainian society is repeatedly exaggerated, and since Russia has banned both, an air  of criminality is achieved which is largely unwarranted. The Azov Battalion was formed during the first months of the Kremlin-backed military conflict in Donbas.  It was created by men with pronounced far-right views, some – neo-Nazi, though its leader Andriy Biletsky has tried to distance himself from that part of his highly chequered past.  While the Battalion and the Azov Civic Corps certainly espouse far-right views, they can certainly not be called neo-Nazi and the organizations are not illegal.

Azov has dismissed any link with the young men and called “the LNR terrorists cowardly” since they appear to only detain adolescents.

There is an ever-increasing number of people ‘arrested’ by militants from both the ‘Donetsk and Luhansk people’s republics’ on charges that do not bear scrutiny.  In this case, the only verifiable detail about the young men arrested is their daring act back in August involving a Ukrainian flag.