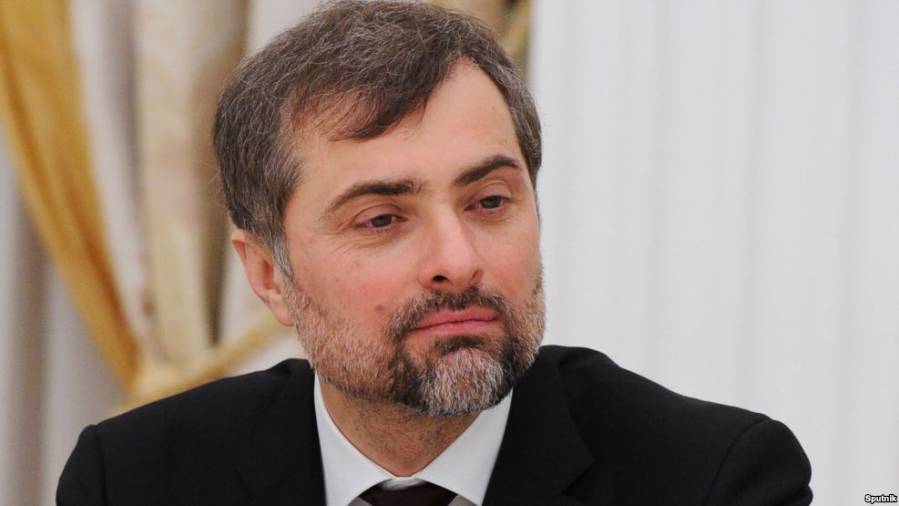 KYIV -- Ukrainian hackers claim to have broken into a second e-mail account linked to Vladislav Surkov, a senior aide to Russian President Vladimir Putin, releasing documents they say add to mounting evidence of the Kremlin meddling in Kyiv’s affairs.

The new e-mails were obtained by RFE/RL from the hackers in advance of their public release on November 3. If authentic, they provide detail about the extent to which Surkov’s office worked to set up separatist enclaves in eastern Ukraine in 2014.

The e-mails include plans that ostensibly show how associates of Surkov plotted to destabilize Ukraine’s eastern Kharkiv region, researched Ukrainian politicians who openly supported weakening central power in a bid to exploit the country’s political divisions, and helped establish the leadership of separatist groups in the Donetsk and Luhansk regions.

They indicate that, in one case, a draft law on an economic zone in eastern Ukraine purportedly written by Surkov himself was sent to the office of an opposition lawmaker and later introduced in the Ukrainian parliament.

The new release comes one week after an initial batch of e-mails from an inbox allegedly associated with Surkov, a longtime Putin aide who is the point man for Ukraine in his administration.

Analysts say they demonstrate careful planning by Russia ahead of the forcible annexation of Crimea in March 2014 and a direct Russian role in fomenting anti-Kyiv actions in the Donetsk and Luhansk regions, which led to a war that has killed more than 9,600 people since that April and persists despite Western-brokered cease-fire deals.

In both cases, the e-mails were released by a group of Ukrainian "hacktivists" who call themselves the Cyber Alliance.

READ MORE: Inside The Ukrainian ’Hacktivist’ Network Cyberbattling The Kremlin

On November 3, the Cyber Alliance posted a video on YouTube in which a character in a trademark mask of the hacker group Anonymous takes credit for hacking accounts in Surkov’s office and warns, "This is just the beginning."

Independent international analysts and Ukraine’s domestic Security Service, the SBU, have said many of the e-mails in the first group appear authentic, but there were doubts about some of the documents. Several people whose correspondence with Surkov was included in the leak have confirmed they sent the messages to Surkov released by the hackers.

The Kremlin has not explicitly called the e-mails or attached material fraudulent but has sought to cast doubt on their authenticity. Putin’s spokesman, Dmitry Peskov, said of one unspecified text that Surkov "doesn’t use electronic mail...so someone must have sweated quite a bit to compose this document."

Surkov himself has not commented on the matter.

The e-mails released on November 3 were hacked from [email protected], a private e-mail account that uses the digital signature "Ivan Ivanov" but appears to have been managed by Surkov assistants Maria Vinogradova and Yevgenia Kudryavtseva, to whom many of the letters are directly addressed.

Vinogradova and Kudryavtseva also handled the e-mail account from the first leak. Contacted by RFE/RL’s Russian Service, both declined to comment.

The [email protected] account, reviewed by RFE/RL, includes 340 megabytes of data from 336 incoming messages, many addressed to Surkov himself, and 87 outgoing messages, including some that appear to have been signed by Surkov, between November 28, 2014, and September 21, 2016.

The authenticity of the newly released e-mails and documents has not yet been fully established, but Aric Toler of the open-source investigation unit Bellingcat and the Atlantic Council’s Digital Forensic Lab told RFE/RL that the metadata and other aspects of the e-mails appeared genuine.

An e-mail sent to Surkov’s office on April 29, 2015, by Anna Makharinskaya, an assistant to Mikhail Markelov, a State Duma member from the ruling United Russia party at the time, included a detailed plan to destabilize Kharkiv, Ukraine’s second-largest city, with 1.4 million people. Neither Makharinskaya nor Markelov, who the document indicates authored the plan, could be reached for comment.

The plan -- titled Package Of Measures X -- says that "the majority of the population of the Kharkiv region adheres to opposition views toward Kyiv" and includes a proposal to create an organization called Civil Initiative that would "develop and implement a set of...actions in order to mobilize dissent [and] criticism of Kyiv authorities," as well as promoting "autonomy" for the region and establishing "a dialogue in this regard between Kharkiv and Kyiv."

But the plan appears to have fizzled if it ever got under way, according to a June 4 e-mail identified as being from Markelov. "’The Kharkov, rise up!’ movement and &#146destabilization rallies and actions’ have become "irrelevant," the author wrote, using the Russian spelling for the city name.

Among Kharkiv’s youth there is growing support for the ideas "’Ukraine is Europe,’ ’Russia invaded Ukraine,’ ’Kharkiv is Ukraine,’ etc.," the author continued, adding that among pro-Russian activists it is believed that "Russia has abandoned us."

The developments described in those e-mails seems to align with events and attitudes in Kharkiv in 2015. In the months following the pro-Western Euromaidan protests in Kyiv, which drove Russia-friendly President Viktor Yanukovych from power in February 2014, Russia-backed separatists rallied for a "Kharkiv People’s Republic," storming government offices like their counterparts in Donetsk and Luhansk, and a group calling itself Kharkiv Partisans targeted pro-Kyiv groups in a bombing campaign that killed several people, according to Ukrainian authorities.

Ultimately, the uprising in Kharkiv failed and the city remains under Ukrainian control today -- while Donetsk and Luhansk are held by the Russia-backed separatists.

Other e-mails included in the November 3 release indicate that Surkov’s associates devoted time to researching Ukrainian federalization -- a process for granting more power to the regions, weakening the central government in Kyiv. Many of the e-mails in the account contain what appear to be briefings from his assistants on legislation in Ukraine’s parliament, the Verkhovna Rada, and news reports about the conflict in eastern Ukraine.

The e-mails suggest Vinogradova and Kudryavtseva were used to pass correspondence between Surkov and leaders of the separatists in Donetsk and Luhansk. Russian Aleksandr Kazakov, an aide to Donetsk separatist leader Aleksandr Zakharchenko, features prominently in the e-mails, writing to Vinogradova with several requests to pass on messages to Surkov. In one, addressed directly to Surkov, an author identified as Kazakov begs for a meeting to ask about Surkov placing him on "unpaid leave."

On December 15, 2015, an unidentified sender sent a list with proposed replacements for the heads of so-called "ministries" in what separatists describe as the "Luhansk People’s Republic." It included the names and resumes of possible candidates to replace 13 officials but not the the self-declared "prime minister," Igor Plotnitsky.

In a series of e-mails that appear to have been sent from official government e-mail accounts in April and May 2015, an author identified as Steffen Thomas, who is listed on the official German Bundestag website as state secretary at the Federal Ministry of Finance, discusses with Russian Deputy Finance Minister Aleksei Moiseyev the possible resumption of banking services in the separatist-controlled areas of Donetsk and Luhansk.

Banking services in those parts of the Donetsk and Luhansk regions remain cut off today.

With reporting by Mark Krutov of RFE/RL’s Russian Service