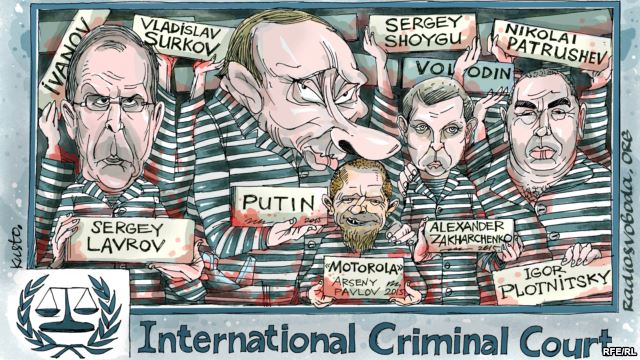 The truth clearly hurts.  A day after the International Criminal Court’s Office of the Prosecutor found Russia’s annexation of Crimea to be an international military conflict between the Russian Federation and Ukraine, Russia has decided it wants out.  There is a problem, however, and Russian President Vladimir Putin’s instruction is a touch comical since Russia is only able to inform that it doesn’t want to be a participant.  Despite numerous misleading headlines, Russia cannot dramatically leave since it has never joined in the first place.  It could, however, have ratified the Rome Statute and now doesn’t want to.  If the reason is because of such unkind words as ‘military conflict’ and ‘occupation’, then Russia will surely need to abandon the United Nations and the Parliamentary Assembly of the Council of Europe, both of which have passed documents of equally bruising truthfulness.  The same applies to the threats of investigations into its bombing of civilian targets in Syria.

Putin’s instruction was pointless for another reason.  Ukraine has still not ratified the Rome Statute either, however it has formally acknowledged the International Criminal Court’s jurisdiction over all events linked to the conflict since April 2014.  The Office of the Prosecutor’s Report [OPR] report identified the situation with Crimea as an international military conflict and is also considering the (substantial) evidence of direct Russian involvement, even control, of the conflict in Eastern Ukraine.  Russia can be deemed liable for crimes committed on foreign territory regardless of whether it is a member of the International Criminal Court.

This was clarified in January 2016 when the ICC authorized an investigation into crimes committed during the 2008 war between Georgia and Russia.  In welcoming the move, Human Rights Watch pointed out that Georgia, having joined the ICC in 2003, will be obliged to cooperate fully with the court.  Russia may not be bound by this same obligation, “however, given the court’s rules governing its jurisdiction, the ICC prosecutor now has a mandate to impartially investigate allegations of crimes committed in Georgia by all parties to the conflict, regardless of the nationality of the person allegedly responsible.”

Russia can refuse to cooperate as much as it likes, however any individuals suspected of involvement in war crimes could end up before the ICC regardless.

Putin also instructed Russia’s Foreign Ministry to write to the UN Secretary General, asserting that the International Criminal Court “had not lived up to expectations”.  The Ministry’s statement specifically mentions concern over the investigation into the 2008 war and claims that there can be no trust in the Court.

Comments from Dmitry Peskov, Putin’s press secretary, and others, indicate that the same claims will be made about the investigation into Russia’s invasion of Crimea, over which the Office of the Prosecutor’s Report is quite unequivocal.  The international conflict began when Russian armed forces were deployed to gain control over Ukrainian territory without the consent of the Ukrainian Government, and is continuing in the form of an on-going state of occupation”.

The report only briefly lists types of human rights violations, but these will doubtless be examined in detail and the culprits, hopefully, held to answer (more details here: International Criminal Court demolishes Russia’s narrative on Crimean annexation )

While Russia is probably more concerned about the real liability which can be established by the International Criminal Court, it has also fought hard to prevent other important and hard-hitting documents from being passed.

The Parliamentary Assembly of the Council of Europe [PACE] passed two very strong resolutions on Ukraine during the October plenary session, with the very titles refreshingly hard-hitting.  Resolution No. 2132 ‘Political Consequences of the Russian aggression in Ukraine’ speaks of Russia’s ‘growing role in the ongoing conflict’ and demands the removal of the Russian soldiers whose presence Russia continues to deny.  It repeats condemnation of Russia’s occupation of Crimea and the human rights violations, as well as of “the illegal Duma elections held on 18 September in occupied Crimea”, the results of which must be considered null and void. The second Resolution 2133 is entitled Legal remedies for human rights violations on the Ukrainian territories outside the control of the Ukrainian authorities.

This was probably the first time that PACE or any European structure had described the conflict in Ukraine so honestly.

The resolution points to the negative impact that the imposition of Russian rule has had on the Crimean human rights situation and condemns  “the reported serious violations and abuses committed against residents of Crimea, in particular extrajudicial killings, abductions, enforced disappearances, politically motivated prosecutions, discrimination, harassment, intimidation, violence, arbitrary detentions, torture and ill-treatment of detainees and their transfer from Crimea to the Russian Federation, as well as reported abuses of other fundamental freedoms, including the freedoms of expression, religion or belief and association and the right to peaceful assembly”.

Russia is urged to release all Ukrainians “unlawfully detained and judged without regard for elementary standards of justice”; to create a safe environment for journalists and human rights defenders; to put an end to all abuses against Crimeans, and more.

Kommersant took a startling view of the vote, claiming ‘success’ for Russia, with more states allegedly supporting Russia’s position than in March 2014.  A quick glance at the list of countries and how they voted makes it easy to assess Russia’s ‘success’.  All European countries, aside from some post Soviet states, as well as Serbia, supported the resolution.  So too did Israel, taking a stronger stand than it had back in March 2014.

Russia’s dismissal of the recommendations cannot minimize the importance of such an unambiguous position, just as its petulant attempts to reject the International Criminal Court cannot waive the liability of those responsible for war crimes.