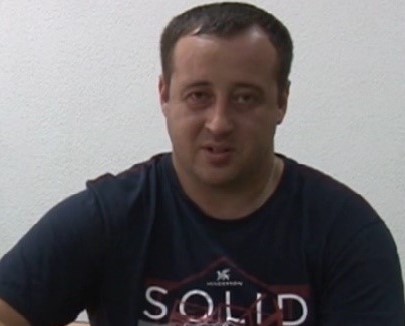 A fourth Ukrainian arrested by Russia and accused of being part of a ‘Crimean sabotage’ plot in early August has been identified through close scrutiny of Russian state-controlled television.  The Crimean Human Rights Group is now trying to find out more information about Volodymyr Prysich, both who he is and where Russia is now holding him.  If Russia really uncovered a ‘sabotage plot’, why is it hiding some of the men and preventing those whose whereabouts are known from seeing lawyers?

The only information available about Volodymyr Prysich comes from a report on state-controlled Rossiya 1 TV channel.  On August 21, they call Prysich a truck driver from Kharkiv who ‘confesses’ on an operational video to having been recruited by Ukrainian military intelligence in January 2016.  Driving around Crimea, he supposedly gathered information about the deployment of military technology.

Unlike Yevhen Panov, the first Ukrainian whose ‘confession’ was broadcast on Russian television, Prysich does not bear any obvious signs of beating or torture.  He does, however, recite his ‘confession’ as though reading from a script.

He asserts that he was recruited by a military intelligence officer called Oleh, codename Musa. He was supposed to follow the movement of technology, and pay attention to its type, any marks identifying it and number plates identifying the region. They supposedly installed a program on his telephone which passed on information and instructions.

He had been in Crimea 8 times, he says, up till August, and passed photographs of military technology, etc. to the military intelligence man 5 times.

The written report speaks of a meeting that Prysich allegedly had with ‘Musa’ in Kharkiv on August 9, where he was asked to illegally take a box to Crimea.  This is not heard on the video and may be a mistake since it would post-date all alleged incidents.

There are claimed to have been two groups of ‘saboteurs’: one near the village of Suvorovo, the other near the Syvash.  The Rossiya 1 news reader says that the area near Suvorovo had been divided up for patrolling.  Curiously, however, it is mentioned that the area was guarded by both police and border guards, and that it was easy to muddle one’s own and others.  It would presumably have been easy, therefore, for one lot of Russian patrollers to shoot another without the need for ‘saboteurs’, but the death of FSB officer Roman Kamenev is blamed on the latter, as is the death of Russian soldier Semyon Sychev.  .

The report goes on to claim that new information has emerged and that on August 7 several Ukrainian military officers flew by helicopter to the border between mainland Ukraine and Crimea “to cover the departure of their people”.

The viewers are told by a former military intelligence officer that all of this was drawn up at high level, and that only the chief military commander “could take responsibility for carrying out a military operation in peacetime.”

This is exactly the reason why Ukraine believes that Russia’s undeclared war is coordinated from the Kremlin, however in this case, there are some serious hitches in the Russian story.

Lack of evidence and suspicious timing

Russia claimed that there had been two ‘attempted incursions’ during the night from 6-7 August and then mass shelling from Ukrainian territory the following night.  It was asserted that the soldier had been killed during the alleged shelling.  Russia claimed to have caught up to 7 men, while others had managed to get away via the Syvash.

It is clear from local reports in the social media that something did happen in the early hours of August 7, however it seems likely that this was a drunken brawl between Russian border guards and enforcement officers. There is literally nothing to suggest that anything took place during the night from 7-8 August, with the lack of satellite evidence confirmed by western countries.

It was not just the absence of any proof that made the story so very suspicious.  The occupation authorities had blocked many independent websites just prior to the events which were supposed to have coincided with a massive amount of military technology being brought into Crimea.  Since that was not the alleged target, the heightened security likely would have made this a bad moment for a ‘sabotage foray’.

As has been the case with many prosecutions of Ukrainians held incommunicado for some time after their arrest, the story is based almost solely on videoed ‘confessions’ from all four men: Panov, Zakhtei, Redvan Suleimanov and Volodymyr Prysich.

Essentially thanks to the European Court of Human Rights, Russia finally allowed Panov to see the lawyer appointed by his family after almost 2 months in captivity.  The meeting was fairly short, but Panov had time to explain that his ‘confession’ had been tortured out of him and that none of it was true.  His brief account of the torture applied was backed by the medical information that Russia was ordered to provide by the Court in Strasbourg.

Almost immediately after this one meeting, both Panov and Zakhtei were taken to Moscow where Russia is again trying to prevent them from seeing lawyers.

If you watch Russian media reports during August, this was a major ‘Ukrainian sabotage plot’, with viewers repeatedly told that it must have been planned at the highest level in Ukraine and with Russian President Vladimir Putin having called an emergency security council.  The plan was supposedly foiled, though at the cost of two Russian lives, and Crimeans can now supposedly rest easy.

Blurred video footage is provided supposedly proving the FSB story, but showing at least one Ukrainian who is not in custody and denies any part in the alleged ‘plot’.  The men whose roles are purportedly confirmed by the imprisoned Ukrainians’ ‘confessions’ are also unsuited for the part: Oleh Dmytrenko, for example, is in his 50s and retired from military service, while Oleksiy Sandal received shrapnel injuries in May of last year and is no longer in active service.

Russia appears to be holding four men (at least) in custody, with the only evidence against them being the ‘confessions’ they have made without any access to lawyers or consul.  If the FSB had any proof to substantiate the claims, this ‘plot’ would not be appearing almost solely on Russian television.