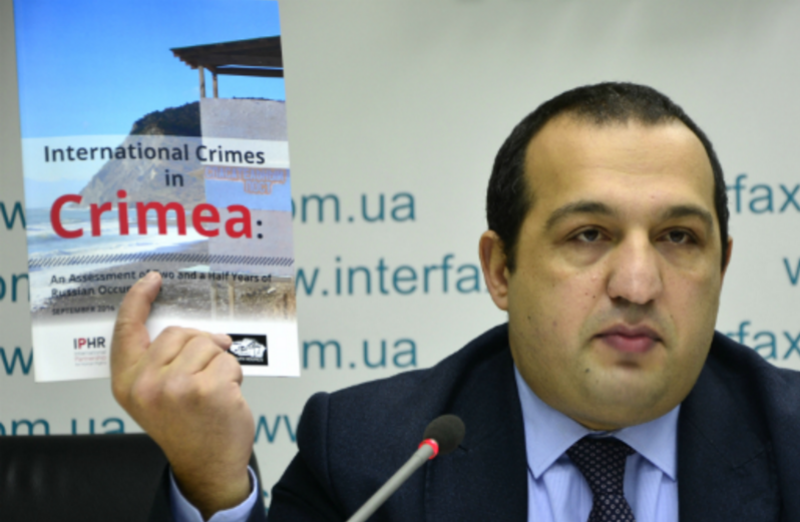 International and Ukrainian human rights groups have compiled an important report entitled International Crimes in Crimea: An Assessment of two and a half years of Russian occupation.   The report was presented on Nov 16 and sent to the International Criminal Court.

At the presentation, Brigitte Dufour, Director of the International Partnership for Human Rights stressed that the crimes her organization and others have documented are wide-scale and systematic, with the pattern seen over the period of occupation.

The evidence was sent to the ICC in accordance with Article 15 of the Rome Statute.

The report contains information about 7 murders, 15 forced disappearances, 90 cases of illegal detentions in custody, 39 cases of torture and / or other forms of inhumane treatment, seizure of public and private property. The human rights activists also point to the forced displacement from the peninsula of almost 60,000 civilians.

IPHR project manager and lawyer Simon Papuashvili stressed that no one had been punished for the crimes committed during the two years on the occupied peninsula.

"Our task is to break the vicious circle of impunity and to bring to justice those who deserve it," he said.

The human rights activists want the ICC Office of Prosecutor to launch the investigation into crimes in Crimea. Simon Papuashvili predicts that this will take two years.

The lawyer also said that the human rights defenders were not only trying to make the investigation of crimes start, but also want to use universal jurisdiction, having activated such investigations in other countries.

and Russia’s response which does not waive it of liability