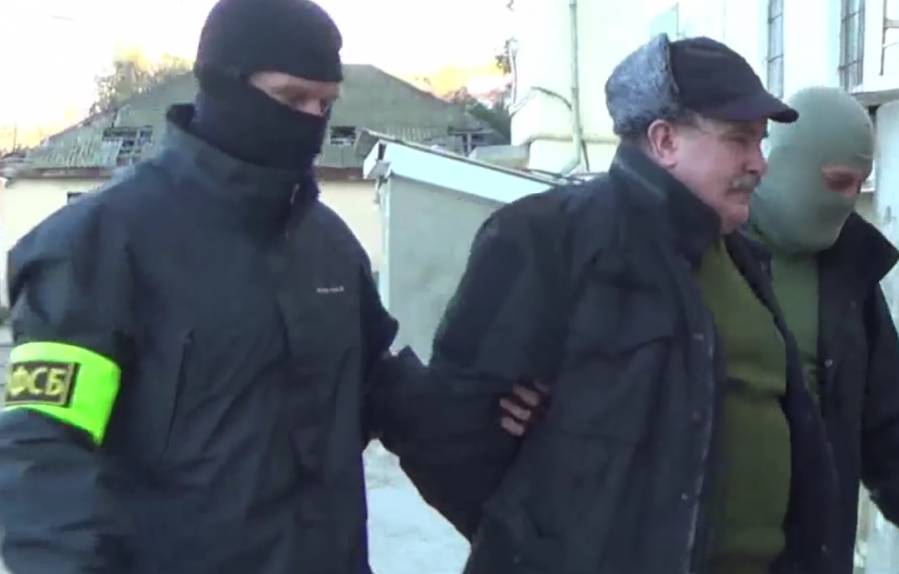 Russia’s FSB has reported yet another arrest in Russian-occupied Crimea, with Leonid Parkhomenko, a long-retired Black Sea Fleet captain accused of spying for Ukraine.  This is the sixth arrest in two weeks which the Kremlin has claimed is evidence of Ukraine’s continuing ‘provocation’, and Ukraine dismisses as part of the ongoing ‘Russian FSB soap opera’.  Andriy Lysenko from Ukraine’s Defence Ministry believes the Russian Security Service are simply taking an easy option by sifting through old databases, and ‘catching spies’ among men who were once linked with the Black Sea Fleet or Ukrainian military, regardless of how many years have passed since then.

The charges are of ‘state treason’, under Article 275 of the Russian criminal code which suggests that Parkhomenko is a Russian citizen.  The five men recently arrested are Ukrainians and are accused of ‘spying’.

A video has been produced of Parkhomenko’s arrest, but with the sound removed.

In all such cases so far, the men have been held without access to real lawyers, with varying methods used to force them to ‘confess’.

The latest wave of arrests began on Nov 9 with the first targets including two well-known academics Dmytro Shtyblikov and Oleksiy Bessarabov.

The video of Shtyblikov’s arrest would have been comical, had the situation not been so very serious.  The camera focuses on, for example, the Ukrainian trident, a Ukrainian flag on the wall, and Dmytro Yarosh’s ‘Right Sector’ business card.  The card is described on Russian television as being from the nationalist movement banned in Russia.  It was first ‘found’ intact and looking remarkably untouched in a totally gutted out car at a checkpoint near Kremlin-backed militant-controlled Sloviansk in April 2014.  Russian propaganda used the business card as ‘proof’ that Right Sector was behind the shootout, with this leading to a twitter meme storm, with Yarosh’s business card ‘found’ in all kinds of wildly improbable places (including the Sistine Chapel in the Vatican!).   The video shoots of weapons were of the same quality as ‘evidence’ since they are reportedly airsoft weapons and testify only to Shtyblikov’s paintball hobby.

Neither here, nor in any of the other cases is there any evidence that the searches were carried out in the presence of independent witnesses, and it is known that the men did not have access to lawyers.

For almost 10 years Shtyblikov and Bessarabov researched issues of international and regional security and published a large number of texts in this field, as well as appearing in the media and expert meetings  (for details here).

Volodmyr Dudka is a retired military man who has a cardiac condition and an ulcer.  He was briefly allowed to see a lawyer whom he told that his supposed ‘confession’ had been extracted through threats against his family.

Two more Ukrainians were arrested on Nov 20.  Oleksiy Stohniy is claimed to be an officer of Ukraine’s Military Intelligence [HUR], while Hlib Shabliy is referred to as a Ukrainian officer, a Rank 2 captain in the Ukrainian Fleet.  Stohniy works in a shop selling toys and office supplies, and Shabliy is also described as a businessman, with Kiselyov claiming that in both cases the men’s jobs were ‘cover’ for their actual activities working for Ukrainian intelligence.

The news of their arrest was first provided on propaganda chief Dmitry Kiselyov’s Rossiya 1 news program with the report entitled ‘The latest failure by Ukrainian intelligence: saboteurs failed to harm Crimea”

The same ‘Right Sector’ business card was thrown in between the videoed ‘confessions’ of the two men.

All are in custody and face long sentences although no proof has been provided to back any of the FSB claims.  In Parkhomenko’s case, he is reported to have retired, and become a reserve officer back in 2005. He faces a sentence of up to 20 years with the ‘trial’ likely to be held in secret.