In October, the Kharkiv Human Rights Protection Group monitoring team worked on gathering information and documenting of human rights violations in the village of Troitske and its surroundings in Popasnaja district, Luhansk region.
Close arrangement to the front line, along which the Ukrainian military is strengthening its position, changed the way of life of the inhabitants of this small village considerably.
January 2015 was the most severe winter month since the settlement had been attacked. Holy Trinity Church, built in 1840, was damaged by "Grad" shelling. This building has survived two wars: the Civil War of 1917 and the Second World War.
Holy Trinity Church is one of the oldest churches in Luhansk region. It has architectural monument status. 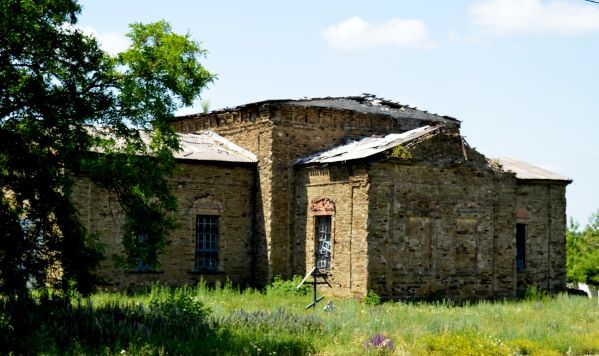 After signing the Minsk agreements this church got the maximum damage. One of the shells hit the center of the altar.
Today local inhabitants hope that the historical architectural monument will one day be restored and hopefully suffer no more shelling.
The rural school attracts our attention immediately - it has been repaired recently. Bright red roof can be seen from afar. But the gym, new windows and the walls of the institution have already been damaged by the fragments of shells in 2016 again.
Now the classrooms are being actively restored on the second floor, the repairing on the first floor is over, and the children started school year on time.
Most help in restoring of virtually destroyed school came from charity organizations. 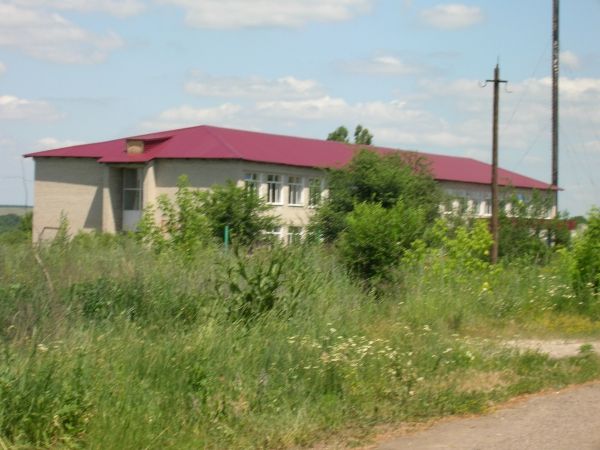 Recently charity organizations from Western Ukraine sympathizing with the people of the settlement have completely renovated kindergarten which is also located in the school building.
Today 30 children attend the village school from first to 11th grade. There are five preschoolers.
During the interview employees of the village council noted not without joy that three children had been born in the settlement from the beginning of 2016.
But their pride that birth takes place in the village despite regular attacks, is  marred by the statistics that most of the local population left the settlement with the beginning of the active phase of hostilities to have a chance to survive. According to various estimates only 600 to 800 people live here currently. The inhabitance consists of pensioners mostly. The most part of youth left due to lack of work and prospects and to the constant threat to life and health.
As in most front-line settlements, restoration of destroyed or damaged homes in Troitske is the number one issue today. After the direct hits of shells one home was totally destroyed. while others are partially damaged and in need of refurbishment. Cracks appeared in the walls of many houses from the blast. According to the village administration there are 101 damaged houses in Troitske. 6 of them are destroyed completely.
During the day the village is quiet, but from ten at night residents can hear explosions of shells, so it isn’t possible to have rest here at night . Hits for residential areas haven’t been fixed recently. Most of them get the positions of the military. They are about 500 meters away from the village. There are about five kilometers in a straight line to the neighboring village Kalinowo, which is controlled by the militants.
The issue of the movement is another painful topic for the villagers. In the village there is a small river Luhanka through which a temporary bridge is installed. It’s not an easy task for civilian vehicle to overcome this obstacle. But everyone has adapted himself somehow. Firstly ambulance refused to react to calls because of the absence of normal transport connection.
The bridge was blown up at the very beginning of 2015, but regional authorities still are not concerned with the date of its resumption. According to the assurances of soldiers that are guarding it, estimates for recovery have already been made. There is even a company willing to conduct restoration work. But "movement" to repair the bridge ends at this very point.
There’s a bus from Popasna to Troitske both ways three times a week: Tuesday, Thursday and Saturday. Popasna is only 18 kilometers away. Nevertheless the ticket price is unreasonably high for the bus - 25 UAH one way. And the trip is not provided by high-quality, comfortable buses but by ordinary Gazelle minibus type breathing its last. And there is no alternative. The buses have to cross the same pontoon bridge, made by military engineers, again. Using this bridge is equivalent to passing the obstacle course of medium complexity.
As the locals say, you can have a separate adventure if your happen to stick on the bridge and you have to wait for someone to carry out rescue efforts. Additional difficulties with a movement across the bridge are related to the winter period, when a road is covered with ice. It is impossible for a car to get on the bridge, to say nothing of a bus. And then connection with civilization is broken. 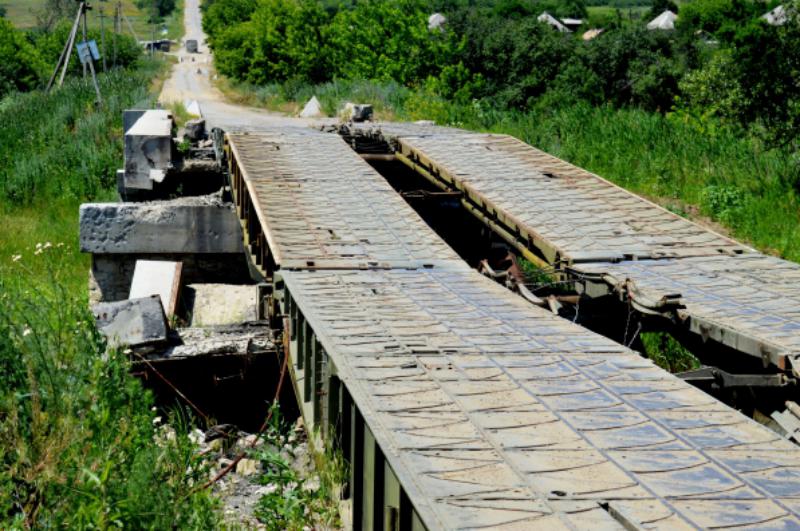 Medical service in a village is carried out by the trained nurses. There are no doctors in Troitske as well as there are not any pharmacies. That is why a patient (a preditable patient, but urgent situations happen sometimes ) has to drive out to the nearest Popasna, or to expect when physicians will be able to arrive in a village. It should be marked that «Doctors without borders» are often enough here. They conduct the reception of local population and give out medications in the case of necessity.
An ambulance can be called from the neighbour towns (Popasnaya or Bakhmut). But at first by phone a controller finds out very carefully if a patient really needs serious medical aid. And if somebody wishes to get normal treatment, then he needs to go to Popasnaya, Lisichansk or Bakhmut. 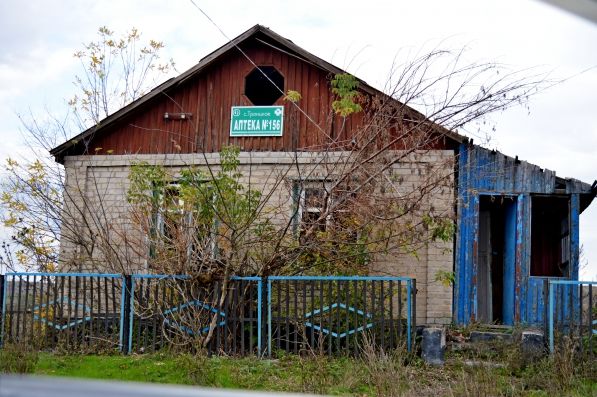 Separately and in detail I would like to say that Russian media services are still as available in a village as they were a year ago. Locals watch Russian television and use Russian broadcasting whether they want it or not. Those of them, who had financial possibility, purchased and set satellite dishes. But there are very few of them. «Lugansk 24», belonging to separatists, and other Russian and «novorosiya» TV channels broadcast widely. Ukrainian TV can be caught only in some places and in poor quality. We haven't managed to сatch any Ukrainian radio station, though we were staying in a village the whole week.
The primary purpose of work of mobile monitoring groups of the KHPG is to collect and process the information, related to self-willed executions in the area of the antiterrorist operation, and also to illegal imprisonment, tortures, violent disappearance, death and wounds of civilians, as a result of military operations. With beginning of military conflict on east of Ukraine our group has fixed three cases of wound of civilians as a result of military operations in the village of Troitske (but it is known about 12 same cases). 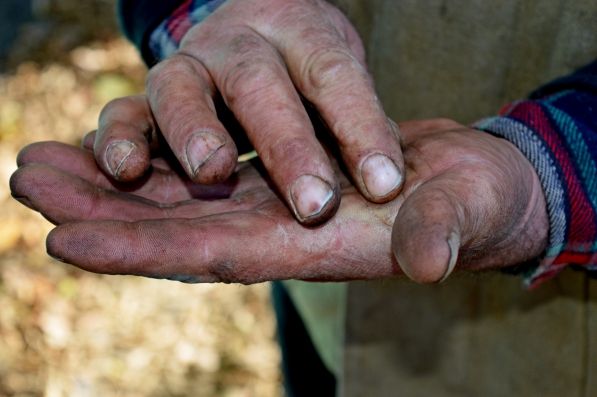 To talk about the general impression of a monitoring trip, it is utterly negative. That was for many reasons. One of them is relations between peaceful population and soldiery of the Armed forces of Ukraine disposed in a settlement. Confusion is a word which describes moods of people in a suitable way. And the sorrow is that soldiery does not bother to change something to the best.
When moving within borders of Troitske our group marked the presence of home-made road signs several times. They have appeared in the village on delimitations of streets quite recently. They are «Zurabivka», for example, or «Mamirivka». At first it was not clear to us what new pointers meant. But later, after communication with settlers, everything lined up in a logical chain. It appeared that «Zurab» and «Mamir» were call signs of the commanders of Ukrainian military units which stood in this settlement from the beginning of military conflict. Commanders of these units have never rotated. According to locals the whole village was divided by such a secret method. How should that be understood? Why did not commanders go to rotation? What were those tablets for and what did they mean? 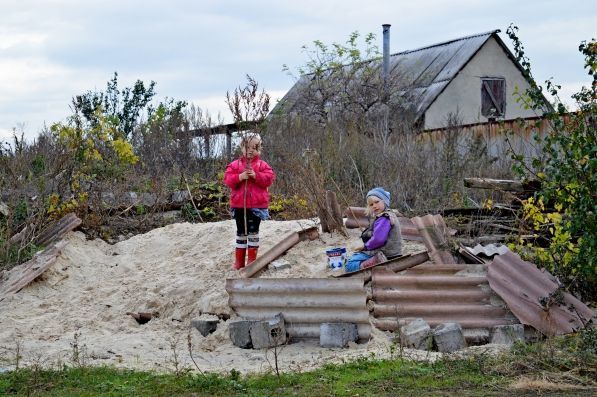 Though, sadly, but it’s time to lift the subject of presence of military within the borders of settlements, and also of their relations with civilians. In addition, there is a question who and how controls the actions of soldiery in blockhouses? Why are public activists and staff of the ATO and the Ministry of Defense of Ukraine quiet about all that self-will and offenses which some people in a military uniform regularly afford in relation to civilians? Why every time soldiery stops the civilians on the blockhouse, continuous talks begin about their Lugansk registration and all Donbas people being «separy» (shorten from «separatists»). Why every time having seen your certificate of inwardly moved person a military man starts saying that you must be kept behind a barbed wire separately from the «real Ukrainians»?
It is quite possible to integrate Donbas to Ukraine again - but not by such attitude toward civilians.
Then Peace will be!