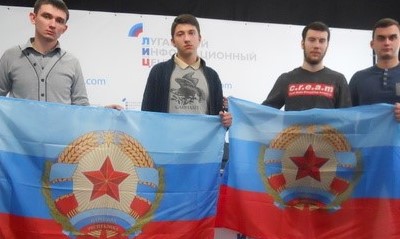 Kremlin-backed militants from the so-called ‘Luhansk people’s republic’ [LNR] have produced yet another propaganda ‘pardoning’ stunt involving two ‘Ultra’ football fans, while threatening that two other young men – Vlad Ovcharenko and Artem Akhmerov - could face 20-year ‘sentences’ for what the militants call “state treason and spying”, as well as ‘desecration of the state flag’.

On Nov 24, the LNR information agency and Russian media reported that the “Luhansk ultras had rejected a proposal from the Azov Battalion to exchanged them for captured LNR residents”.   There is nothing to indicate where the alleged proposal was made, and this is important since Azov has dismissed any link with the young men and earlier called “the LNR terrorists cowardly” since they appear to only detain adolescents.

The two alleged ‘ultras’ from the Zarya football club were said to be suspected of having ‘desecrated’ the LNR flag.  This is the only specific act mentioned, though the report claims that the LNR’s ‘security service’ have “established episodes of subversion by young people recruited by Ukraine’s security service and military intelligence”.  It then asserts that a number of fans have been detained and alleges that this is an “underground unit of the Azov battalion”.

Ovcharenko and Akhmerov are alleged to have been the leaders of this group, the others of taking part.

The show on Nov 24 revolved around the other two young men – Dmytro Kramarenko and Viacheslav Ukrainsky.  According to the militants’ claims, up to 32 people are involved, however the original reports spoke of four people having been seized.

Kramarenko’s role was to publicly state that he and his friends rejected the alleged proposal from Azov to exchange them for people Ukraine’s enforcement bodies are holding prisoner.  Kramarenko states that the supposed offer is insulting to them, that they don’t want to live in Ukraine, they want to stay in Luhansk.  In words that suggest he is reading a script, he admits that the Zarya ultras are guilty before “The Republic…. We didn’t realize that the Ukrainian security services use fans like puppets.  Ignorance of the law doesn’t free us from liability”.

Then it was Ukrainsky’s turn.  He apologises to all “citizens of the Republic”, as well as to those who have lived through shelling and lost their homes “because of the Kyiv authorities”.

The LNR and Russian propaganda sites then go on to show photos of the young men holding the “state flags of the Republic” given to them by the LNR youth organizations who gave taken the repentant young men under their wing.  This, Edward Gubarev, head of the student union ‘Young Republic’, claims, is aimed at demonstrating how humanely and tolerantly they treat every person, and that they have the right to ‘reform’.

There is no evidence of any other ‘subversion’ from Ovcharenko and Akhmerov, but the so-called ‘republic’ does not appear to extend its tolerance to them.

On November 5, the so-called LNR security minister, echoed by pro-Kremlin Russian media, announced that they had uncovered a group of football fans from the football club ‘Zarya’ ‘Ultras Chorno-Bili’.  Ovcharenko and Axmerov were claimed to have led an underground unit of Azov, and also to have been recruited by a Ukrainian military intelligence officer with the code name ‘Big and Mean’.  The ‘investigators’ had supposedly uncovered the transfer of information constituting a state secret, as well as possession of symbols of the Azov Battalion, Right Sector as well as of the football club, and “circulation of neo-Nazi literature and leaflets with calls to overturn the constitutional structure of the republic.  Their activities were financed by the Ukrainian security service and Ukrainian far-right organizations.”

The report then ended by saying that a check was being carried out as to whether members of the group had been involved in “directing artillery fire on Luhansk in 2015, in “attacks on activists during the referendum for LNR independence”, as well as deaths on Maidan and during the disturbances and fire in Odesa on May 2, 2014.

The claims, like those made by Russia’s FSB when it arrests Ukrainians, are grandiose, however the only actual ‘offence’ mentioned remains a video from August 2015.  On this, some of the football fans are alleged to have called on people “to undermine the LNR constitutional order and burned the state flag of the republic”.

Any such claims are based solely on ‘confessions’ from 19- or 20-year-olds who are totally under the control of the militants.  There is nothing to indicate that the young men have lawyers, and there are no grounds for believing that they will receive a fair ‘trial’.