Political PR & sabotage instead of real investigation on eve of 2nd Maidan anniversaryUkraine’s only trial over Maidan killings under threatPolice & judges accused of impeding prosecution of crimes against Euromaidan activistsAnother person charged with Euromaidan crimes allowed to escape?Ex-Security Service chief in custody over Euromaidan killingsSo who doesn’t want justice for Euromaidan victims?High-ranking Berkut officer charged over Euromaidan killingsEuromaidan: A Year of Impunity and what went wrongEx-Berkut officer on trial over AutoMaidan ambushEx-Berkut officers arrested on suspicion of involvement in Maidan killingsWhere are 13 mysterious Berkut sniper suspects?Who (hasn’t) answered for crimes against Maidan?Maidan killings suspect missing after being released from custodyTwelve detained on suspicion of involvement in the gunning down of Maidan protesters (updated)Blood and Berkut Sniper Bullets on the President’s HandsMustafa Dzhemiliev on Maidan: I’m proud of you, dear fellow UkrainiansBerkut snipers aimed at protestersWaiting for more bloodshed?Open threats and covert plans as ‘hostage law’ deadline nearsRuling majority takes hostages through new “amnesty law”
• Topics / The right to life
• Topics / Human Rights Violations associated with EuroMaidan 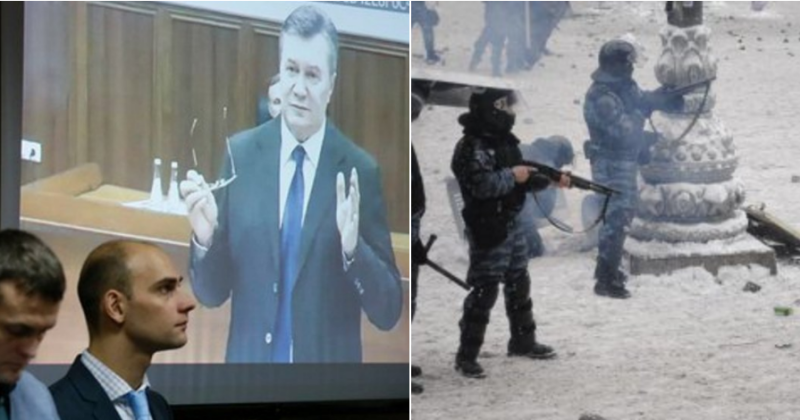 Ex-president Viktor Yanukovych has finally testified as defence witness in the trial of five former Berkut officers charged with killing activists in February 2014.  He claimed to ‘not know’ or ‘not remember’ most vital details about the events during Euromaidan, and even how he came to flee to Russia.  Everything – from the bloodshed on Maidan to “the situation in Crimea and Donbas” was supposedly the work of “radicals who manipulated people”, and he even claimed to be the ‘ally” of the families of activists killed on Maidan and to be interested in finding out the truth.

Yanukovych was not on trial, and appeared only as a witness, meaning that the lies, and claims of amnesia could not be properly challenged.  The questioning had first been scheduled for Nov 25, but had to be cancelled after activists prevented the five suspects from being brought to the court room.  They claimed that they feared that the men might be released from custody, although this was overtly wrong since all five had only just had their detention extended.  The obstruction, in fact, merely gave Yanukovych a good opportunity for a press conference without inconvenient reminders from the prosecutor or families’ lawyers of how his version diverged from the truth.

Lawyers representing the families of Nebesna Sotnya, those activists killed during Euromaidan, and the civic initiative Euromaidan SOS had therefore issued a statement before Monday’s court hearing.  They asked activists to not block the suspects’ appearance in court.  Yanukovych, they stressed, is already facing 8 criminal proceedings which have not yet reached the courts.  The reason is simple: it is always much easier to prosecute those who carried out criminal orders.  The 5 defendants on trial are charged with the killing of 48 people on February 20, 2014.  Although Yanukovych is a suspect in one of the episodes, he is not in the others, and any attempt to add another defendant would simply jeopardize the trial’s end in convictions.

They pointed out also that the lawyers for Nebesna Sotnya had not supported the questioning by video link, and stressed that it was the men’s defence who had wanted it.  They were, however, prepared for the questioning during which they had no expectation that Yanukovych would tell the truth.

It is hard to see any real information component in the 4 hours of questioning on Monday.  Yanukovych denied virtually everything, including a phone conversation after the first day of shooting with Russian President Vladimir Putin and a meeting with Putin’s adviser Vladislav Surkov which the prosecution can clearly prove.  He presented his own ‘version’ of the bloody dispersing of young students from Maidan on Nov 30, 2014, claiming that there were hardly any students, and a lot of radicals who “provoked the Berkut riot police”.   This assertion that the Berkut officers who were seen brutally beating and dispersing protesters throughout Euromaidan had been ‘provoked’ was one of Yanukovych’s motifs, together with his supposed lack of memory and claim that he learned about some of the momentous events taking place purely from the media. He denied having given the orders to shoot activists on Maidan and claimed to not know who had.

At a press conference in Rostov after the questioning, Yanukovych claimed to be satisfied since he “had long wanted to tell people about all of that”, and said that the Ukrainian prosecutor should now begin investigations into crimes by activists against Berkut.

It was not only Yanukovych who used the opportunity for a bit of PR.  Ukraine’s Prosecutor General Yury Lutsenko used a short break to announce that Yanukovych was suspected of state treason and helping Russian officials to try to change the borders of Ukraine.  This is over the appeal which Yanukovych signed on March 1, 2014, calling on Putin to use armed forces on Ukrainian territory.  Lutsenko says that this encouraged the deployment of Russian forces against Ukraine and the annexation of Crimea.  He asserted that he was taking this measure since Yanukovych is outside Ukraine and effectively in hiding from Ukraine’s law enforcement bodies, and that the ‘suspicions’ would soon turn into an indictment.

It remains to be seen whether this is the case, and in fact what would come of such an indictment.  Serhiy Horbatyuk, whose Special Investigations Department has finally achieved results in investigating specific Maidan crimes, and the lawyers representing victims’ families, have often expressed frustration at high-profile claims, pressure on investigators to get cases before the courts, etc.  This, they have warned on many occasions risks cases falling apart at trial level and real culprits being acquitted.