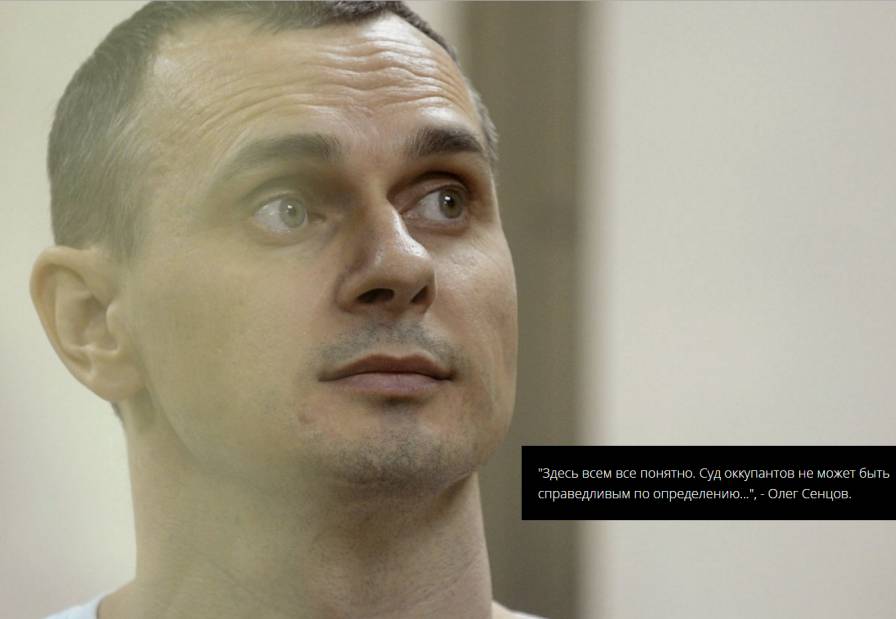 "Here everything is clear.  An occupying state’s court cannot, by definition, be fair" - from Oleg Sentsov’s final words before the verdict was announced

Russian President Vladimir Putin has claimed that Ukrainian filmmaker Oleg Sentsov was sentenced to 20 years “for terrorism”, not his work or his opposition to Russia’s annexation of Sentsov’s native Crimea.  His assertion that Russia is a law-based country comes just two weeks after the International Criminal Court accepted jurisdiction over Russia’s ongoing occupation of Crimea and spoke of Russia’s “non-respect of a number of due process and fair trial rights”.

Neither Putin’s assertions about Sentsov, nor his claim that it is the court in Russia which decides have any credibility, and the demands for Sentsov’s release have come not only from world-renowned film directors, but from the Parliamentary Assembly of the Council of Europe, the EU, OSCE and all democratic countries.

Putin was responding to a call from Russian director Alexander Sokurov to release Sentsov.  He asserted that Sentsov, a world-renowned film director and the father of two young children, had effectively “devoted his life to terrorist activities”.  He denied that Sentsov’s imprisonment had anything to do with “what he thinks about the events that took place in Crimea”, and claimed “that Russians could have suffered as a result of Sentsov’s actions”.

Putin then said that “there are certain rules and norms which we can use, but for that it’s necessary that the corresponding conditions “are ripe”.

He did not elaborate on this.

The government-controlled RIA Novosti felt the need to remind its readers that Russia’s justice ministry had recently refused to return Sentsov and civic activist Oleksandr Kolchenko to Ukraine under a bilateral agreement.  The ministry falsely claimed that the two men had, as residents of Crimea, automatically become Russian citizens.  The lie here was, in fact, exposed by the investigators and courts since both men were charged and convicted as citizens of Ukraine.  This would not have been the case had they had Russian citizenship.  Both Sentsov and Kolchenko have repeatedly rejected any attempt to foist Russian citizenship on them, and an application on Kolchenko’s behalf has been lodged with the European Court of Human Rights.

There is essentially no truth at all in Putin’s assertions.

Sentsov, Kolchenko and two other opponents of Russia’s invasion and occupation of Crimea - Gennady Afanasyev and Oleksiy Chirniy - were arrested in May 2014.  They were all held incommunicado, without access to lawyers, for around 3 weeks before being shown on Russian television and declared ‘terrorists’ on May 30.

From the moment Sentsov and Kolchenko were allowed to see proper lawyers, they told the same story, that they had been subjected to torture and pressure to ‘confess’.  Sentsov appears to have received particularly bad treatment and was constantly told that if he didn’t provide the testimony demanded, they would make him the ‘ringleader’ and he would rot in a Russian prison.   Both men withstood the pressure and have always denied all charges.

Sentsov was sentenced to 20 years’ maximum security prison and Kolchenko to 10.  Both men are, in breach of Russian law, being held thousands of kilometres from their home and families.

PLEASE contact representatives of the arts and politicians in your country and ask them to demand that Russia release Oleg Sentsov, Oleksandr Kolchenko and all the 36 Ukrainians it is holding on fabricated charges.

And WRITE LETTERS OR POSTCARDS to Oleg and Oleksandr (Sasha)!  Even just a word or two will send an important message to them, and to the Kremlin, that they are not forgotten!  The letters should not weigh more than 100 g. and must, unfortunately, be in Russian.  If this is a problem, please just cut and paste the following, perhaps with a nice photo.