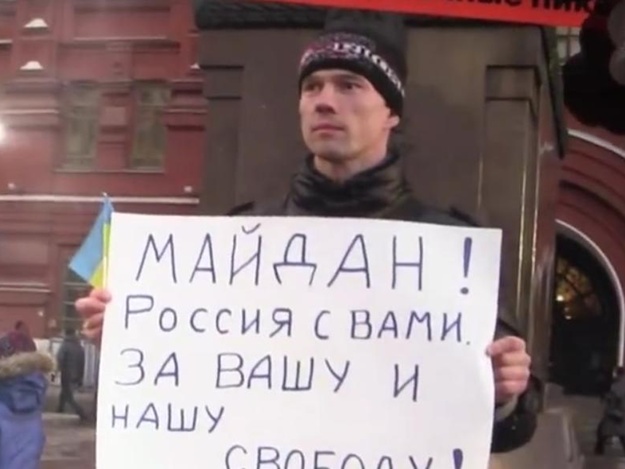 "Maidan - Russia is with you!  For your freedom and ours!"

Since recounting how he had been subjected to torture, Russian civic activist Ildar Dadin has been threatened with criminal proceedings, a ‘defamation’ suit and has been placed in solitary confinement for 6 months.   The official ‘investigation’ supposedly found no confirmation of his allegations of torture, although numerous other former Karelia IK-7 prisoners and relatives of those serving sentences have reported similar treatment. There have been overt efforts to discredit Dadin in the Russian state-controlled media, and there are serious grounds for questioning the official version of the fight which Dadin supposedly had with a cellmate.  There have been other cruel tactics as well, such as the rumour spread by Kremlin-funded trolls that Dadin had hanged herself.  The young man’s mother needed to be hospitalized after reading that.

34-year-old Dadin is the first person to have been imprisoned under a draconian new law which allows criminal prosecution for totally peaceful protest, as guaranteed by Russia’s Constitution.  Judging by the court proceedings, it is likely that he was targeted and received a 3-year sentence (later reduced to 2.5 years) because of his active support for Euromaidan and Ukraine in general (details here).

He was already known to be suffering effective reprisals while in the Karelia prison IK-7 when, on November 1, his wife Anastasia Zotova made public with chilling details of the violent beatings, torture methods, constant threats and humiliation that Dadin said he was being subjected to.

The report was also taken very seriously outside Russia, with the European Parliament, for example, passing a resolution on Nov 24.  This demanded Dadin’s release and an independent investigation into the allegations of torture, with targeted sanctions suggested against those officials found to be responsible.  The European Court of Human Rights is also in communication with the Russian authorities following an application from Dadin’s lawyer.

This is categorically not the view taken by other former prisoners, nor by human rights groups.  At at the Sakharov Centre in Moscow on Nov 28, Lev Ponomaryov from the For Human Rights movement presented a number of people who could directly, or through the accounts of their relatives, give the lie to the Penitentiary Service’s denials.   Other prisoners, for example, had spoken of being suspended, stretched out as if on a rack and pulled, savagely kicked while lying on the ground, and other forms of torture.   Dadin’s wife has now put together of the types of torture applied.   It should be stressed that none of this is any surprise to the Committee against Torture, and other Russian human rights organizations.

It is probable that Dadin did not receive significantly worse treatment to other prisoners.  The difference was simply that he was courageous enough to talk about it openly.

He is now paying a higher price.

The Penitentiary Service that on Nov 16, there was a fight between Dadin and his cellmate over a water-boiling device.  It is claimed that the other inmate, who is not identified, received numerous head injuries.  Those who know Dadin treat the story with immense scepticism and it seems possible that the fight was deliberately provoked by the unidentified cellmate.  The supposed conflict was widely reported on pro-Kremlin television with the aim clearly to discredit Dadin and his allegations.

He has now been placed in solitary confinement for 6 months, allegedly as punishment for this ‘fight’, and the authorities are threatening new criminal proceedings over it.

that the Karelia prison administration are considering suing Dadin for alleged ‘slander’.   This was the response to the announcement that the Investigative Committee would not be initiating criminal proceedings over the allegations of torture.

Russia has long used criminal proceedings or civil suits to silence those who dare to speak out about torture. In 2012 Russia’s FSB abducted Leonid Razvozzhaev from Ukraine while he was applying for political asylum and then tried to claim that he had voluntarily returned and handed himself in.  He managed to shout from court that he’d been tortured.  A whole array of cynical and totally unwarranted charges were then used, including illegal crossing of the border and false claims of torture.  Razvozzhaev remains imprisoned to this day.

Dadin’s lawyer Alexei Liptser of the danger his client now faces.  Solitary confinement is effectively a more severe sentence, and will not protect Dadin from torture by prison officers.  On the contrary, since now Dadin’s cries will not be heard by other prisoners.

Dadin as a political prisoner by the Memorial Human Rights Centre soon after his arrest, and was a prisoner of conscience by Amnesty International after his conviction on Dec 7, 2015.

Dadin is, for the moment, the only person imprisoned under a new Article 212.1 of the Russian Criminal Code introduced in July 2014.  The new norm is in violation of Russia’s Constitution and legislation, as well as the European Convention on Human Rights to which Russia is a party.  It imposes double punishment for the same actions, first via administrative legislation, then criminal.

Dadin was accused of having taken part in legal protests on Aug 6, Aug 23, Sept 13 and Dec 5 2014. b During the trial both the investigators and the court made much of Dadin’s position on the so-called ‘Ukrainian question’, as well as his visits to Ukraine.  He was supposed to have visited Kyiv three times “in order to gain skills in opposing the police”.

It seems likely that Ildar’s support for Ukraine and for Ukrainian political prisoners held in Russia was a factor in the severity of his initial sentence.  His courage in exposing the torture and lawlessness in Russian prisons is now resulting in further reprisals.