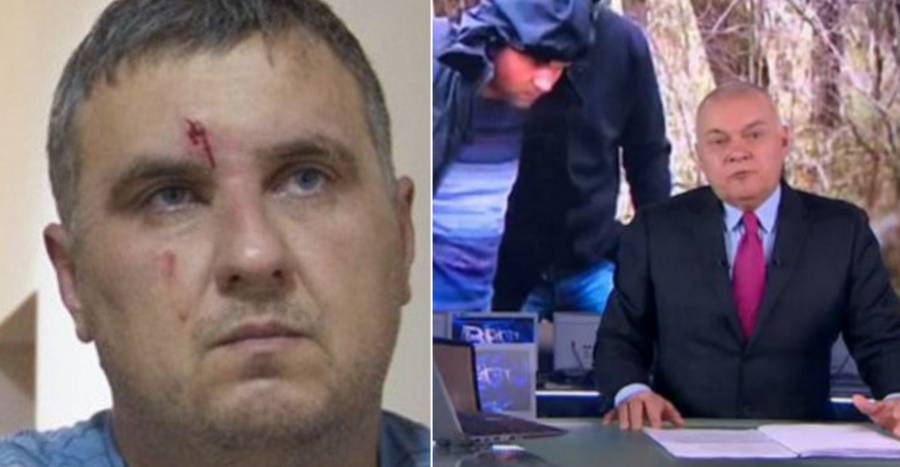 The FSB’s new Crimean ‘plots’, in their use of torture, televised ‘confessions’ and unsubstantiated claims, bear an eerie similarity to the first Crimean arrests in May 2014 of Ukrainian filmmaker Oleg Sentsov, civic activist Oleksandr Kolchenko and two other men. However, if back in 2014, Russia was obviously targeting open opponents of its invasion and annexation of Crimea, this time even that is not clear.  There is no evidence or likelihood that the first four men, seized in August, even knew each other.  Of the six men so far arrested in November, two are world-known academics, and all exceptionally ill-cast for the role Russia is claiming.

It is at present unclear how many criminal cases are involved, but the gross irregularities in all 10 cases, the hyperbole from Russia’s leaders and government-controlled press give grounds for considering them together.

At a press conference on Nov 29, Yury Hrishin, a Professor of Law and attorney, gave a blistering assessment of the material provided by the FSB, mainly the videos shown on Russian TV.   All of these are in grave breach of the fundamental principle of the presumption of innocence, with the men invariably treated as proven ‘saboteurs’ or ‘terrorists’.

What we see, he says, is essentially a bad imitation of an interrogation, with all the procedural rules governing these being flagrantly breached.  He stresses that Russia is in violation of its own legislation, as well as international norms.  There are clear regulations, for example, about the video recordings of any interrogation.  Any person present must be seen and identified, and we should see the person interrogated being informed of his rights.  In every such video, we see only the person himself being asked very leading questions, which also infringes procedure.  In one particularly incredible moment, a supposed witness is simply shown a photo, which the viewer does not see, and asked if this is the person.  The video footage itself is not continuous and in most cases the people are suspiciously quick and unhesitating in describing quite complicated plans.  There is never any indication of their legal status and whether they have already been formally charged.  This is of critical importance since in no case is a lawyer present, which is a particularly grave violation if they are already accused of a crime.

Access to lawyers has in general been denied, both before and after their televised ‘confessions’.

Why the FSB doesn’t want the men to have independent lawyers is quite clear from the case of Yevhen Panov, the first man whose detention was reported.  Three days after he disappeared, a video produced by the FSB was shown widely on state-controlled Russian media. Panov is seen ‘confessing’ to working for Ukrainian military intelligence, with none of the names mentioned corresponding to the other three men who were later reported to have been arrested.  Panov reels off information about supposed plans to carry out acts of sabotage, with a ferry crossing, oil handling terminal, helicopter regiment and chemical factory named as targets.

For two months the lawyer whom his family had hired was prevented from seeing Panov.  At one point the ‘investigators’ even produced a typed note, allegedly from Panov, but unsigned, saying that he did not require the lawyer’s services.

It was only after the European Court of Human Rights demanded that Russia provide information about how Panov came by his injuries, about his access to lawyers, etc. that Russia finally allowed access.  Panov stated that all his testimony had been tortured out of him and that he had simply read out what was demanded of him. He gave graphic details of the torture methods applied.

Immediately after this short meeting, Panov and Andriy Zakhtei were moved to Moscow where they are being held in the Lefortovo Prison.  After further weeks of blocking access to lawyers, both men have finally allowed to see lawyers.  The latter, however, have been forced to sign commitments to not divulge any details.  Ihor Kotelyanets, Panov’s brother, also reports that FSB officers turn up at the prison and use psychological pressure to force Panov into effectively retracting his statement about the torture and confirming his initial ‘confession’.

At a closed court hearing on Dec 5, both Panov and Zakhtei were remanded in custody until March 2016.  Popkov is convinced that the FSB have a lot to hide.  He posted “fake court rulings” about Zakhtei’s supposed hooliganism.  2 days after both he and Panov were actually detained by the FSB, both are supposed to have pestered and offended people at the bus station in Simferopol and have been jailed for 15 days.  Popkov notes that the court minutes even record Zakhtei yet again ‘admitting guilt’ and regretting having “set a bad example”.

Judging from the few accounts available, the FSB is using another standard method which is to try to demoralize prisoners, and convince them they have been abandoned both by their families and by Ukraine.

Zakhtei, a taxi driver who seems to have been arrested after answering a strange call out, has spoken of threats of reprisals against his wife and child.  He might well have reported other methods of undue influence, had he been given access to a lawyer earlier and if he were not now prevented from seeing his lawyers except in the presence of prison guards.

Ridvan Suleimanov appears to have been required for a televised confession and has since been forgotten.  He remains imprisoned, without any charges being laid.

The fourth person’s very existence was only discovered from scrutiny of Russian propaganda channels.  Virtually nothing is known about Volodymyr Prysich, except that he is a truck driver from Kharkiv.

There probably was some disturbance during the night of Aug 6-7, although it is likely that this was in fact a drunken brawl between Russian border guards and enforcement officers.  Russia loudly claimed that there had been ‘incursions’ then and on 7-8 August, as well as shelling by Ukraine’s military from mainland Ukraine.  None of this is borne out by satellite pictures and has been treated with due scepticism by western countries.

There is nothing at all to explain the next wave of arrests in November 2016.  The lack of any evidence and the choice of supposed ‘saboteurs’ does seem to justify the suspicion that the FSB has gained access to a Ukrainian database of people who once had dealings with the Black Sea Fleet and is randomly taking pick.

On Nov 9, two well-known academics - Dmytro Shtyblikov and Oleksiy Bessarabov - were arrested together with a retired Ukrainian military officer Volodymyr Dudka.  Once again, the only material is from televised videos of ‘confessions’.

The men have been denied contact with their families and with lawyers.  Dudka was allowed a very brief meeting with his lawyer and told her that his ‘confession’ had been extracted through threats to his family.  Dudka is very close to his son and dotes on his 10-month-old granddaughter.  As his brother pointed out at the press conference, the FSB is accusing Dudka of acts of sabotage aimed at leaving his infant granddaughter without electricity.

Each of the cases is absurd, with the first video of the arrest, search and interrogation of Dmytro Shtyblikov having focused on a Right Sector business card debunked as hilariously inept Russian propaganda two years ago.

Each arrest is accompanied by television features in which Ukraine is presented effectively as aggressor,  the men are invariably treated as ‘saboteurs’ whom the valiant FSB have caught in time, and by zero evidence.