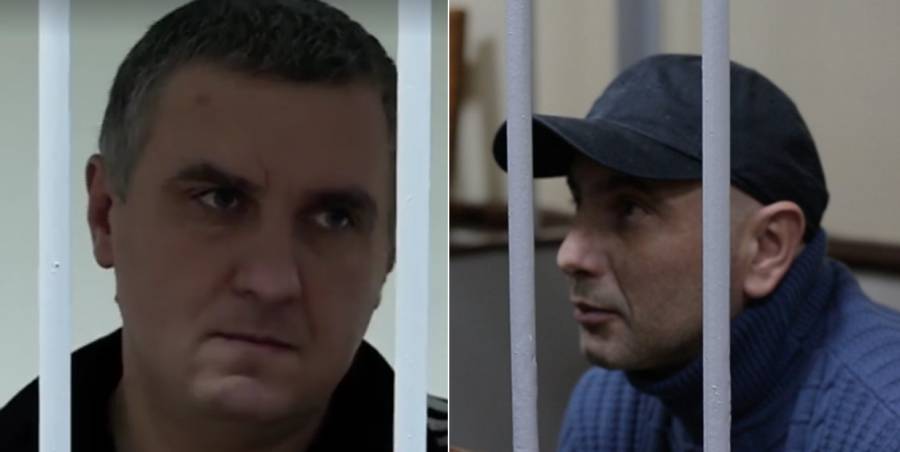 Two Ukrainians seized by Russia’s FSB and accused of a ‘Crimean sabotage’ plot have lodged formal complaints with Russia’s Investigative Committee.  Both allege savage forms of torture applied by the FSB to extract ‘confessions’ and demand proper investigations.  Much more is known about Yevhen Panov, however the complaint now lodged by Andriy Zakhtei suggests that both men were subjected to similar treatment.

Yevhen Panov is from Energodar in the Zaporizhya oblast, and it remains unclear how he came to be seized by the FSB.  The latter had first announced his arrest on Aug 10, claiming that he was part of a ‘Ukrainian saboteur’ group, planning serious acts of sabotage.  A video produced by the FSB was shown widely on state-controlled Russian media on which Panov is seen ‘confessing’ to working for Ukrainian military intelligence, without mentioning any of the other men who were later reported to have been arrested.  Panov recited information about supposed plans to carry out acts of sabotage, with a ferry crossing, oil handling terminal, helicopter regiment and chemical factory named as targets.

Panov himself showed clear signs of beating and there was absolutely nothing to substantiate the claims made in the ‘confession’.

A similar video was soon shown of Andriy Zakhtei, then of Redvan Suleimanov.  Typically, the only information that is available about a fourth person – Volodymyr Prysich – came from his ‘confession’ broadcast on pro-Kremlin Russian television.

The nature of these supposed confessions can be assessed by the fact that the FSB prevented Panov from seeing an independent lawyer.  It even produced a nonsensical piece of paper without Panov’s signature to claim that he was rejecting the lawyer’s services himself.

His family asked lawyers to apply to the European Court of Human Rights which responded with a list of hard-hitting questions about the legal grounds for Panov being deprived of his liberty, whether he had a lawyer, etc.

The medical documents provided to the Court already gave strong grounds for believing that Panov had been tortured.  Most importantly, after almost two full months Panov was finally allowed a first visit from the lawyer.

The latter found scars on his wrists from handcuffs and multiple bruises which corresponded to the reports sent to Strasbourg.

Panov told him then that he had not seen his torturers with a bag having been taped over his head. During his seizure on Aug 7, he was struck on the forehead, with this visible even on the first video.  He explains that he answered questions on that video from a piece of paper prepared by FSB officers.

He was held, tightly handcuffed, for 7 days, and kept like this with his hands under his knees.  They thrust a stick, lifted him and lashed his shins with an iron pipe.  He also says that immediately after being taken prisoner, they beat him and used torture methods linked with his genitals.

Russia responded by swiftly moving Panov and the second Ukrainian arrested – Andriy Zakhtei – to Moscow where they are being held in Lefortovo Prison.  This was in the second week of October, and for some time he was put under enormous pressure to reject his independent lawyers (Dmitry Dinze, who represented Ukrainian filmmaker Oleg Sentsov and his wife, Olga) and stay with the ‘confessions’.  All such efforts have failed, with Panov’s allegations largely backed by the medical report Russia was forced to provide the European Court of Human Rights.

In the letter addressed to the head of the Investigative Committee Alexander Bastrykin, Panov writes that at around 4 a.m. on August 7 as he tried to cross into Russian-occupied Crimea via a border crossing near Armyansk, he was stopped by people he assumes were FSB officers.  Over the next six days, he asserts, they tortured him with extreme savagery, and he demands that those responsible be identified and held to answer.

Zakhtei’s account is slightly different, though both men speak of beatings, electric shocks, and of torture methods applied to their genitals.

Mediazona reports that the marks on his wrists from being held in handcuffs while electric shocks were being applied are visible and that they were recorded by doctors. According to his lawyer Ilnur Sharapov, the bandages he was finally given for his wounds after providing the ‘confessions’ were clearly visible during the court hearing which remanded him in custody for two months.

Zakhtei says that the electric shocks were applied for two days, as well as a kind of clamp attached to both his buttocks and genitals causing such excruciating pain that at times he lost consciousness.  He had a bag kept over his head all the time and never saw his torturers.

By Aug 11, he was willing to confess to anything demanded of him.

Although it was clear that something had occurred in the early morning of Aug 7,  there were other reports suggesting that there had been a drunken brawl and shootout between Russian border guards and FSB, with one FSB officer killed.  There was no empirical evidence or witness testimony to substantiate the FSB claims about shooting from mainland Ukraine and another so-called ‘incursion’ the following night.

Bastrykin himself and the Investigative Committee have been involved in the politically motivated prosecutions of a number of Ukrainians, such as Nadiya Savchenko; Serhiy Lytvynov; Mykola Karpyuk and Stanislav Klykh.  There are probably no grounds for anticipating that a proper investigation will be held.  Russia, however, should also not expect that these latest claims of ‘Crimean sabotage’, based solely on confessions will be any more convincing than the numerous other judicial travesties against Ukrainians since Russia first invaded and occupied Crimea.

Please write to Yevhen Panov and Andriy Zakhtei.  Every letter gives them strength and tells them – and Russia – that they are not forgotten!

The letters must, unfortunately, be in Russian.  If this is a problem, even the following, perhaps with a photo, or similar, would be sufficient.