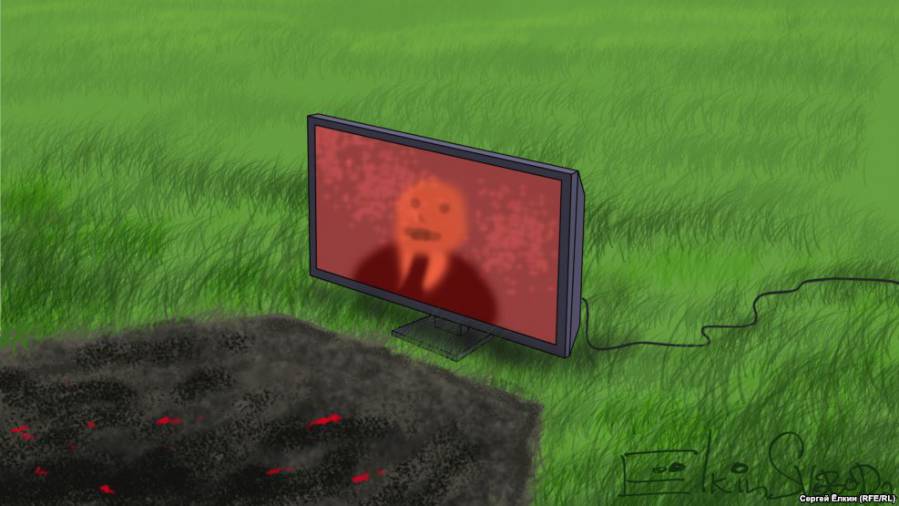 Three years ago Ukrainians were demonstrating for Europe. Today, the Europe they fought for is on life support. (The views expressed in this blog post do not necessarily reflect the views of RFE/RL.)

Demonstrators wave European flags on Kyiv’s Independence Square. The front-runner in France’s presidential election vows to lead that country out of the European Union.

Ukrainians fight -- and some ultimately die -- for the sake of a European future. A populist and antiestablishment wave spreads across a continent -- and across the Atlantic -- putting the very idea of a united Europe on life support.

Oh what a difference a few years can make.

Then, European values were on the march in Ukraine, Georgia, and Moldova. Now they are in retreat in the very heart of the EU.

The road from the Euromaidan to Brexit to Marine Le Pen has been dizzying and depressing. And it has also become one of the dominant narratives of our time.

Adam Thomson, director of the European Leadership Network, wrote recentlythat with xenophobia, nativism, and populism on the rise, "Europe’s condition is more dangerous than at any time since the 1960s."

And lurking in the shadows of this disturbing story, of course, has been Vladimir Putin’s Russia.

Putin didn’t create the Western malaise that led to the Brexit vote in the United Kingdom, the election of Donald Trump in the United States, and the meteoric rise of Le Pen’s National Front in France.

He didn’t make Geert Wilders’ Party of Freedom a front-runner in next year’s elections in the Netherlands. And he didn’t cause Matteo Renzi’s government to fall after losing a referendum this weekend in Italy.

These developments are the results of the extended fallout from the 2008 financial crisis, the Eurozone crisis that followed it, the migrant crisis, and a working-class revolt by those left behind by globalization.

But Putin certainly has fed and exploited the Western malaise.

Back in December 2013, as Ukrainians gathered on the Maidan, the Kremlin-backed Center for Strategic Communications published a report noting that there was a sizable constituency that felt marginalized -- both economically and culturally -- in the liberal West.

And in difficult economic times, Putin was in a unique position to exploit the coming antiestablishment wave.

The West’s dispossessed and disenfranchised were a potential Trojan horse for the Kremlin.

Just days later, in his 2013 state-of-the-nation speech, Putin derided and vowed to oppose the West’s "genderless and infertile" liberalism "that asks us to accept without question the equality of good and evil."

It was all a blueprint for undermining European unity and eroding transatlantic solidarity. It was a plan to divide and weaken the West and to free Russia from the rules-based international order.

Writing in Colta.ru at the time, political analyst Aleksandr Morozov claimed that Putin was "creating a new Comintern" aimed at "the maximum Putinization of the world" and establishing "an entirely new hegemony."

And toward this end, Moscow began intensifying its contacts with far-right parties in the West, including Le Pen’s National Front in France and Jobbik in Hungary.

And it started using its international media assets to make the ground more fertile for their success.

"The Kremlin’s concerted effort to establish networks of political influence has reached into Europe’s core," Alina Polyakova, deputy director of the Dinu Patriciu Eurasia Center and author of the book The Dark Side Of European Integration, wrote in a recent Atlantic Council report.

"These efforts were long ignored, overlooked, or denied by Western European countries. But they are now bearing fruit for the Kremlin."

And one of the reasons they are bearing fruit is because when Putin looked West, he thought he saw something familiar.

He saw an angry, disenfranchised, and humiliated working class that had been left behind by globalization and that believed its traditional values were being insulted.

And in this, he saw something reminiscent of Russia in the 1990s.

Just as the Russia of a quarter of a century ago was ripe for a tough-talking leader who rejected liberal orthodoxies and promised to restore national greatness, Putin thinks much of the West is ripe for this message as well.

And just as he turned resentment into power in Russia, he sought to turn that trick internationally.

Fiona Hill, co-author of the book Mr. Putin: Operative In The Kremlin, recently wrote that "one thing he does know well is how to gauge the national mood, play with emotions, and manipulate people. He also knows how to take the measure of individuals and exploit their flaws and weaknesses."

So as Peter Pomerantsev, author of the book Nothing Is True And Everything Is Possible: Inside The Surreal Heart Of The New Russia, memorably put it, Putin has turned himself into the Che Guevara of the West’s antiestablishment fringe.

But Putin’s backing of Europe’s populist insurgency was also motivated by fear.

"The existence of Europe is a domestic problem for Russia," Yale University historian Timothy Snyder, author of the book Black Earth: The Holocaust As History And Warning, said in a recent public lecture.

Because for all its flaws and problems, Europe presents a transparent and democratic model of governance close to Russia’s borders that directly challenges the authoritarian kleptocracy in the Kremlin.

The EU also provides a consensual model of integration that is far more appealing than Moscow’s, which is based on coercion.

And as those Ukrainians waving European flags on the Maidan showed three years ago, the EU has a magnetic pull on Russia’s neighbors, undermining Putin’s dream of a sphere of influence in the former Soviet space.

"As long as Putin is in power, they are not going to stop trying to undo the European Union," Snyder said.

So Putin appears to be winning the battle for now. But he should hold off on the victory dance.

Because antiestablishment anger is a double-edged sword and Russia isn’t necessarily immune to the populist revolt currently sweeping the West.

And while in the West, the losers of globalization can vent their anger through the safety valve of the democratic process, in Russia they will have no place to go but the streets.

And when they do, it could get quite ugly for the Putin regime.