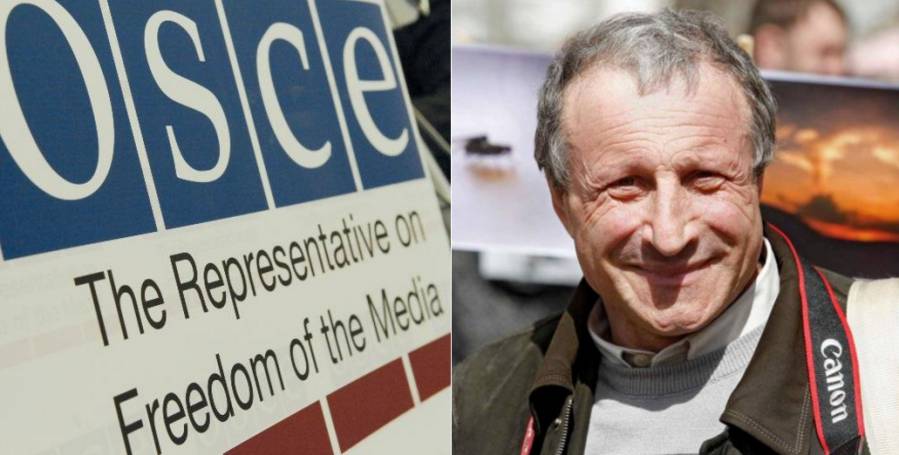 It is unquestionably correct for OSCE representatives to treat Crimea and areas under the control of Kremlin-backed militants in Donbas as Ukraine, but ignoring Russia’s culpability for flagrant rights violations leads to serious distortion of the facts.  This is just one of the concerns about the report released on Dec 1 by Dunja Mijatović, the OSCE Representative on Media Freedom.

An outsider reading the sections on Russia and Ukraine would almost certainly conclude that Ukraine has far greater problems.  Such an impression is widely at odds with the freedom of speech ratings from Reporters without Borders and other international NGOs.  One of the reasons for the divergence lies in the baffling dearth of information about Russian-occupied Crimea and failure to properly address the degree of Russia’s accountability for the situation there.  This is particularly odd given that Freedom House back in 2015 named Crimea under Russian occupation as one of the ‘worst of the worst’.  In 2016, Ukraine had ‘partly free’ status, while Crimea, like Russia, was classified as ‘not free’.  The reasons were manifold and urgently need addressing.

There is also virtually nothing about the areas of Donbas under militant control, although here, as in Crimea, the situation with freedom of speech is dire and there have been cases where journalists have come under fire.

Some of the problems are doubtless linked with the OSCE report’s genre and the scope and limitations of the job.  The Regular Report to the Permanent Council from March through to the beginning of December 2016 mainly lists the OSCE Representative’s reaction to specific issues linked with journalists and the reactions received.  There is no real effort to assess the reaction from the authorities, nor to distinguish between situations where comment from the OSCE Media Representative is appropriate, and those where it is not.

The Russian section begins with mention of a letter from the Russian authorities in response to Mijatović’s statement on an attack on journalists on the border between Chechnya and Ingushetia.  “The authorities condemned the attack and assured me that it would be investigated quickly.”

That sounds good, but there is no evidence that any investigation was carried out of that attack or into the almost immediate attack on human rights defender Igor Kalyapin just days later.  There were also grounds for suspecting that the Chechen authorities were actively intimidating journalists and civic activists to deter them from reporting on Russia’s political trial of Ukrainians Mykola Karpyuk and Stanislav Klykh.

The point of such assurances is therefore strictly limited, if not downright misleading.

Parts of the report also imply much more than seems warranted.  Mijatović, for example, called on the Ukrainian “authorities to carry out a thorough investigation into the death of journalist Alexander Shchetinin”.  She goes on immediately to reiterate her call “to improve the fragile situation regarding the safety of journalists and fully and effectively address the issue of impunity.”  If Mijatović has any reason to doubt that Shchetinin committed suicide, she should reveal it.  Ukrainian journalists who knew him did not question the official version.

Natalya Ishchenko, writing in ‘Den’, notes that Ukrainian media were swift to bewail the report as evidence of how bad things must be in Ukraine, if Mijatović had found so much more to write about problems in their country.  They ignored, as had the OSCE Media Representative, the failure to address the real issue and the real culprits.

This is particularly seen in two cases, both ones where OSCE intervention is vital.

Crimean journalist Mykola Semena is charged with ‘public calls to action aimed at violating Russia’s territorial integrity’ through an article in which he supported the Crimean Blockade as needed to end Russia’s occupation of Ukrainian Crimea.  He faces a 5-year sentence, has already been placed on Russia’s notoriously long ‘List of extremists and terrorists’ and is being prevented from travelling to mainland Ukraine for urgently needed medical treatment.

The report mentions the unwarranted inclusion of Semena and another Ukrainian journalist Anna Andrievska under the Russian part, then writes about Semena under the section on Ukraine.

The basic facts are there, but without any attempt to address the preposterous nature of the charges, and the fact that Russia which is illegally occupying Crimea is prosecuting a journalist for writing that Crimea is Ukrainian and that Russia should end its occupation.

Mijatović writes that she later responded to a request for action from Ukrainian MP and prominent media expert Viktoria Syumar by saying that “it was difficult for me to give a comprehensive assessment of the current state of affairs of media freedom in Crimea since I cannot travel there.”

The very fact that she cannot travel there is surely already a reason for closer attention to the situation, and the lack of physical access has not prevented Reporters without Borders, Freedom House and other NGOs from highlighting the deteriorating situation with freedom of speech and almost total lack of press freedom.

A request for reaction to Russia’s illegal use of Ukrainian radio frequencies in occupied Crimea is simply fobbed off.  Perhaps Mijatović cannot help on such issues, but the question of access to different channels of information is one that she uses to berate Ukraine.

Ukraine has come in for criticism from Mijatović since Russia’s aggression began over any attempts to restrict Russian propaganda.  The issue is doubtless controversial, however the treatment of all those with press accreditation as journalists has often been unwarranted, with Russian government-controlled media unashamedly used for spreading toxic lies and for warmongering.  The argument that such deliberate propaganda can be combatted by pluralism of views ignores the fact that in all areas under militant or direct Russian control, pluralism is banned.  It also fails to recognize the undoubted impact of lies on the vast majority of people who listen to ‘the news’ and do not run to the Internet or change channels in order to critically assess the information received.  Mijatović has also placed enormous emphasis on so-called ‘dialogue’ between Ukrainian and Russian journalists, again ignoring the fact that Russian journalists working for state-controlled media produce what is required of them – or leave.

Even where her criticism may well be warranted, as with the bill, now adopted, to restrict import of anti-Ukrainian printed material, the report is misleading.  The bill targets only import of material from Russia as aggressor state, and is trying (not necessarily effectively) to address a situation whereby the market is flooded with books trying to prove that Ukraine is not a state, that the government in Kyiv committed ‘genocide’ in Donbas, etc.  Again, some will argue that readers must be trusted to read such material critically.  They should examine material in the media about the tragic disturbances and fire on May 2, 2014 in Odesa.  Russia’s leaders and media have assiduously pushed the totally false narrative that this was a ‘massacre’, and sadly a lot of people have been conned.

The OSCE Media Representative is ‘covering’ all OSCE member states, and cannot be expected to investigate each country’s situation in depth.  This does, however, make the report of extremely limited value.  The abuse of ‘anti-extremism’ legislation in Russia is scarcely touched upon, and a number of political prisoners, like Andrei Bubeev or Rafis Kashapov, have not received a mention, presumably because they were imprisoned for blogs or reposts, and not strictly as ‘journalists’.

Nor is there sufficient attention to situations where a journalist has clearly been targeted, regardless of the article of the criminal code applied.  There is every reason to believe this is the case with Ukrainian journalist Roman Sushchenko who was seized in Moscow while visiting relatives and is now charged with ‘spying’.

Mijatović does not mention that Sushchenko is Paris correspondent for Ukraine’s national information agency and was arrested virtually on his arrival in Moscow.  There is every reason to believe that he is one of the many Ukrainians whom Russia has imprisoned as part of the undeclared war it has been waging – on many fronts, including information – since its invasion of Crimea in 2014.