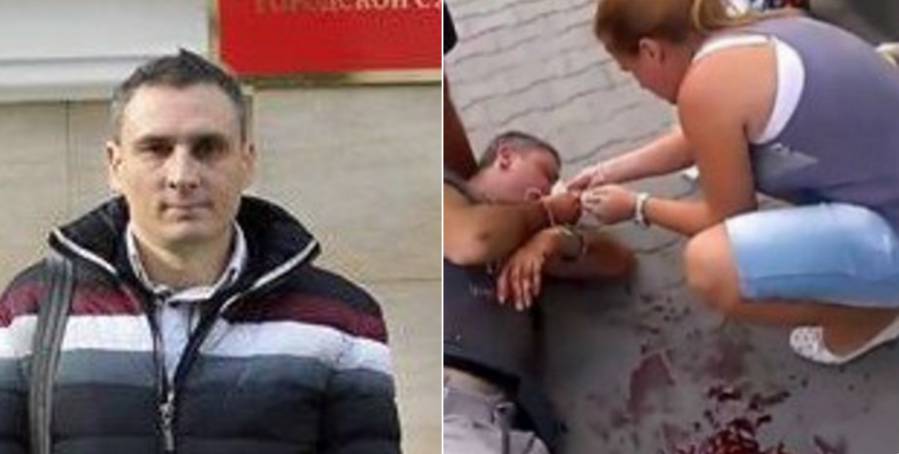 It was not enough that the only person punished after Ihor Movenko was brutally attacked was the Ukrainian himself, not his assailant.  Now Movenko has been arrested and beaten, this time by the FSB to force him to ‘confess’ to extremism.

The Russian FSB came to Movenko’s work on Friday and took him away, as well as his computer.  The  FSB officers beat him in the car, on the way to his home where they carried out a search, again removing his computer and other technology.

Valentina Movenko was home when the FSB arrived with her husband in handcuffs, but they simply took Ihor’s key and opened the door themselves.

She was told not to talk to her husband, however he did manage to tell her that he’d been beaten, and that they’d threatened to remand him in custody if he didn’t confess to extremism.

Typically, the FSB videoed the Movenko flat, and were apparently particularly interested in the Ukrainian flags that they found.  Valentina Movenko says that the FSB men told her that they were taking him to the Sevastopol FSB, and that if he didn’t ‘confess’, the court would remand him in custody.  If he ‘confessed’, they claimed, he would be released on a signed undertaking not to leave Sevastopol or under house arrest.

Movenko was later released, seemingly without the ’confessions’ demanded.  Since his computers, etc. have been retained, it unfortunately seems likely that criminal charges are planned.

As reported, 39-year-old Movenko was attacked on Sept 7, 2016 after he stopped to get money out of a cash machine and then returned to his bike.  Movenko had stickers on the bike, both of the Ukrainian trident and from the ‘Azov Battalion’ which is now on Russia’s huge list of banned organizations.  The man who brutally assaulted him claimed to be from the police, though he did not show any ID.

It was only Movenko who sustained injuries and they were serious.  He was hospitalized, the Crimean Human Rights Group reports, with the doctors finding an open head injury, concussion, a skull fracture, a broken jaw, broken nose, eye injury and more.

It was quite evident that he had been attacked, yet it was Movenko who had his hands bound after the police appeared.  Judging by the surreal video here, there are good grounds for assuming that the police were on the best of terms with the assailant.  The officers even tried to stop Valentina Movenko, who had come as soon as somebody phoned her, from giving her husband some water as he lay on the ground, handcuffed and in obvious need of medical treatment.

The de facto authorities in occupied Crimea were swift to take Movenko to court.  He was fined 2 thousand roubles over the ‘Azov’ Battalion sticker.  Whatever ones opinion of the Battalion and its leaders’ far-right views, the ban itself seems entirely unwarranted and the administrative fine for merely having an Azov sticker absurd.

No criminal investigation was initiated against Movenko’s assailant, despite repeated applications from the victim.

If all that were not bad enough, the situation has now become chillingly surreal, with Movenko very likely about to face criminal prosecution for what Russia calls ‘extremism’.

Movenko is the second Crimean with openly pro-Ukrainian views to have been arrested in the last week.  Volodymyr Balukh had already faced surreal charges almost certainly linked with the Ukrainian flag he had continued to fly over his home, and it is extremely likely that his current detention (at present for a month) and the charges – of possession of bullets supposedly ‘found’ in the attic - are politically motivated.

On Dec 15, the de facto police carried out a raid of a Simferopol market.  There have been raids like this before, and detentions, but this was the first time that people with Ukrainian passports were also detained.

There are strong grounds for believing that both Movenko and Balukh are facing persecution in Russian-occupied Crimea for their Ukrainian passport and pro-Ukrainian position.