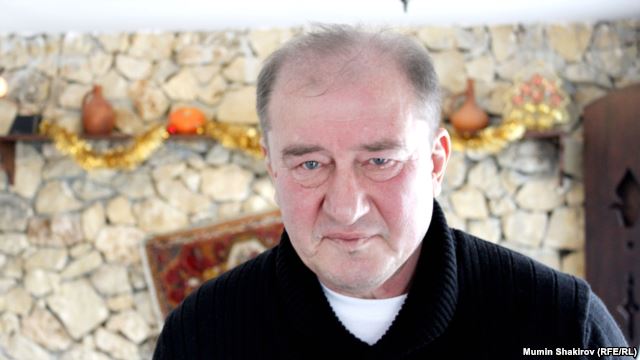 Russia appears to be concocting yet another criminal prosecution against 59-year-old Crimean Tatar Mejlis leader Ilmi Umerov over statements expressing the same position on Russia’s occupation of Crimea as that set out in resolutions from the UN General Assembly, Council of Europe and all democratic countries.

Umerov was summoned to the FSB investigator Igor Skripka on Dec 16 for a ‘pre-investigation check’.  One of his lawyers Emil Kurbedinov later explained that Umerov had refused, as is his constitutional right, to give testimony, but that they expect new criminal proceedings to be brought.

Kurbedinov calls this yet another example of how Russia’s laws against so-called extremism are in fact a weapon against dissidents.  The new charges, if laid, will be because Umerov has remained unwavering in his opposition to Russian occupation and is not afraid to say so.

The ‘investigator’ had wanted to question Umerov about a Skype interview he gave a Kyiv TV channel (17 Kanal) on Dec 12, 2015.

The interview can be heard here.  The Deputy Head of the Crimean Tatar Mejlis [representative assembly] explains on it that Crimea’s return to Ukraine cannot be achieved by military means since the peninsula is now so heavily militarized.  By now, he says, the amount of military equipment and weapons in Crimea has risen exponentially.  He believes that increased sanctions together with the falling price of oil and Russia’s mounting isolation will turn Crimea into an insurmountable burden for Russia.  He calls on Ukrainians to not give up on Crimea which is a part of Ukraine and worth fighting for.

If the FSB hopes to focus on the word “to fight for”, it will have difficulty, since Umerov repeatedly states that there can be no military solution and that any suggestion of such conflict fills him with horror.

That there is nothing even contentious, let alone criminal in Umerov’s remarks, is no hindrance to Russia.

Umerov had just days earlier suggested that new charges might be looming after attempts were made to remove his Russian lawyer Nikolai Polozov from the case by demanding that he be questioned as a witness.

Umerov was initially detained on May 12 and charged over an interview given to the Crimean Tatar ATR TV on March 19, 2016 in Kyiv.  In that interview he stated that Russia must be made to leave Crimea and Donbas, once again the view expressed by all international structures and democratic states. He also stated that sanctions should be increased. Russia is in all seriousness claiming that the interview contained “public calls to action aimed at violating Russia’s territorial integrity’. This is under Article 280.1, a new article introduced within months of Russia’s invasion and annexation of Crimea.

The charges against Umerov were formally laid on May 19 by the same senior FSB investigator.  Skripka claims in that surreal document that Umerov “with intent to carry out activities aimed at violating the territorial integrity of the Russian Federation, … deliberately and publicly called on an unlimited number of people to carry out actions aimed at returning the Republic of Crimea under Ukraine’s jurisdiction”.

Russia was unable to imprison the 59-year-old Umerov because of his serious illnesses, so it resorted to punitive psychiatry.  Umerov was forcibly incarcerated in a psychiatric clinic where the conditions were also dangerous for his health.

He and his lawyers were in no doubt that the psychiatric ‘assessment’ was aimed at exerting influence on him.  It failed.

Typically, the FSB are now refusing to hand over a copy of the ‘linguistic assessment’ carried out.  It is tempting, but unrealistic, to hope that they might be embarrassed by the nonsense written there.  The fact that Umerov was even summoned over the above-mentioned interview suggests that the FSB are willing to continue and even extend prosecutions for stating the undeniable fact that Russia is occupying Ukrainian Crimea and that it must leave, voluntarily or forced through sanctions and international pressure.