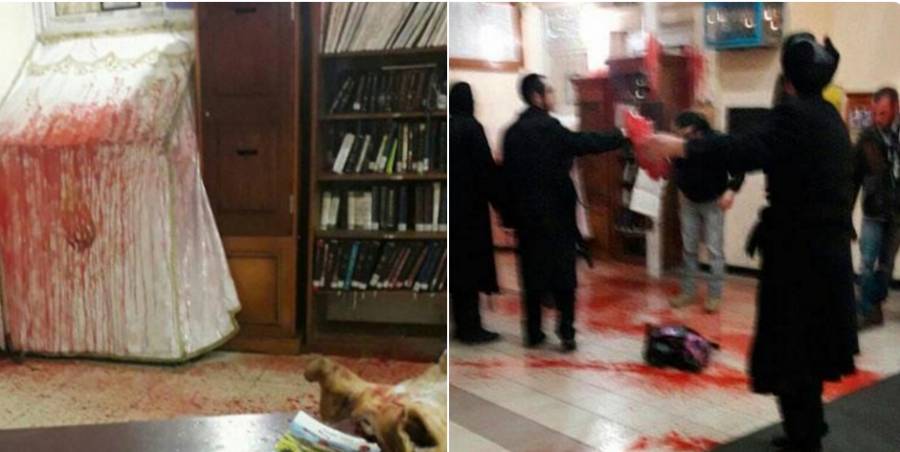 Ukraine’s Prosecutor General Yury Lutsenko has promised that a team of detectives from Kyiv will be sent to Uman in the Cherkasy oblast to investigate the foul attack on a synagogue during the early hours of Dec 21.  In a particularly promising development, the National Police have now said that they are investigating the crime under Article 161 of the Criminal Code which prosecutes for inciting enmity, insulting people on the basis of religious convictions, etc.  It had earlier been reported that the incident had been qualified merely as ‘hooliganism’.

A group of aggressive louts burst into the synagogue at around 2 a.m. on Wednesday morning.  The synagogue is next to the grave of Rebbe Nachman of Breslov (or Bratslav), and a place of pilgrimage for Hassidic Jews.  Pilgrims were praying in the synagogue at the time.

The individuals did not physically attack anybody, but they did shout anti-Semitic insults in Russian at the pilgrims.  This was clearly a planned attack, with the louts leaving a pig’s head with a swastika carved out and spraying the room with 2 bottles of red paint, as well as gas canisters.  They fled before the police arrived, however there is clearly ample video footage.

Lutsenko also stated that as well as ensuring that a team was sent to investigate, representatives of the Prosecutor General’s Office would be involved in the case which he is taking under his personal control.  He says that he personally considers this to be “anti-Ukrainian provocation whoever did it, whether agents of the Kremlin or local idiots”.

He called this a crime against Ukraine and asserted  that Ukrainians had never had conflict with the pilgrims.

Cases of anti-Semitic or xenophobic vandalism virtually never reach prosecution stage, but this case is dramatically bad, both in its scale and in the fact that the offenders did not even try to do it without being seen.

Israeli reports have all referred to the attackers as ‘skinheads’, while Viacheslav Likhachev, the Director of the National Minority Rights Monitoring Group, believes that the local far-right VO Svoboda party are likely to have been behind the attack.  He suspects that they may have brought in people from outside the area to carry it out.

He notes that the head of the Uman Svoboda, Oleksandr Zabuzhchuk has been very active on various fronts since the summer, demanding, for example, the removal of various illegal kiosks, etc.   Since he is aware that those taking part in such ‘protests’ were there for money, he suspects that a financial motive could be involved in an escalation in incidents.  There have, for example, been arson attacks on property belonging to Hassidim from abroad.

Around 30 thousand pilgrims come to Uman for Rosh Hashana, the Jewish New Year, in memory of Rebbe Nachman’s words towards the end of his life about being with him on that special day.

This new attack coincides with the National Minority Rights Monitoring Group’s report on Anti-Semitism in Ukraine in 2016.  Likhachev, who has been monitoring anti-Semitism and xenophobia in Ukraine for well over a decade reports that the situation is in fact improving.

There has been no return to the worst years of 2005 / 2006.  There was a noticeable decrease beginning in 2007, and “over the last 10 years the number of such incidents has remained at a consistently low level.   If there was a slight increase in attacks from 2012 – 2014, in 2015 and 2016, the numbers have dropped back to the minimum.  Although this is a preliminary report, its authors believe that 2016 is continuing the trend to decreasing acts of anti-Semitic vandalism.

The Monitoring Group’s work has been vital in countering ongoing claims, normally from Russia, about supposed rampant anti-Semitism in Ukraine.   The allegations began during Euromaidan, ignoring the multi-ethnic, multi-faith nature of the Revolution of Dignity and were often used by the Kremlin and Russian propaganda.  There have even been fake reports, which fortunately Jewish communities themselves publicly refute and even fake anti-Semitic protests.