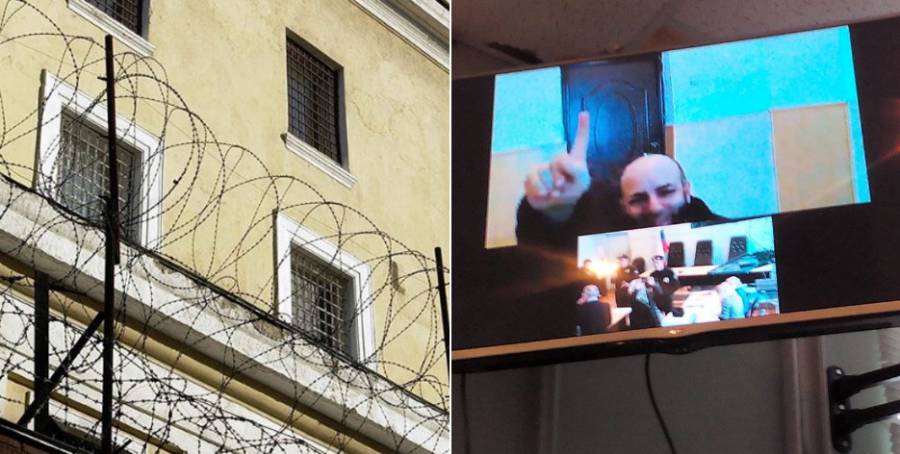 At least one of the Crimean Muslims facing fabricated ‘terrorism’ charges under Russian occupation has reported being tortured and threatened when brought to court hearings and a lawyer reports that FSB special force officers are present and used as a menacing threat when the men are taken to see the investigator.

Useir Abdullaev told the court on Dec 21 that he and other prisoners are forced to lie on the bus floor with their hands in handcuffs behind their backs, and that he has been  beaten in the stomach and legs.

Nor is such treatment only reserved for court hearings.  Emil Kurbedinov, the lawyer representing Useir’s brother Teymur says that his client was brought to see him on Tuesday “with his eyes bound, his hands behind his back, in the pose used to transport former death row prisoners in life-sentence prisons.”

Kurbedinov writes that Teymur Abdullaev was able to pass on information that coincides with that given by his brother.  He said that the FSB ‘spetsnaz’ [special forces unit] treat them like logs, making them lie on the bus floor and that they’re often threatened with physical violence if they move at all.

“The investigator told Teymur in front of me that he should not get up too quickly since you don’t joke with the lads.  There are always FSB spetsnaz officers in the office”, his lawyer says.

Kurbedinov adds that he is preparing a complaint.  It is justified, but like the allegations of torture and numerous applications from the defence, will be ignored.

Speaking outside the court on Wednesday, Kurbedinov said that Teymur Abdullaev views these prosecutions for so-called terrorism against him and other Muslims and the Crimean Tatars, the indigenous people of Crimea, “as political reprisals, as an instrument for putting pressure on the Crimean Tatar people, on the entire population of Crimea”.

Kurbedinov believes that he is quite right.  All these hearings, he adds, simply demonstrate that no reference to domestic law, to international law and conventions have any effect.  The so-called courts simply pass the rulings they are told to pass, and automatically reject all the defence’s applications.

The Abdullaev brothers are both originally from Azerbaijan, but have lived in Ukraine since the early 1990s and Uzeir at least is married to a Crimean Tatar.  They were arrested on Oct 12, together with three other Crimean Muslims, most of whom had been on the Haj recently.  41-year-old Teymur Abdullayev is charged with ‘organizing’ a Hizb ut-Tahrir group,, with this carrying a possible sentence of up to 17 years’ imprisonment.  Uzeir Abdullayev (42); Emil Dzhemadinov; Aider Saledinov and Rustem Ismailov (32) face the lesser charge, but still long sentences, for alleged ‘involvement’.

There are currently 15 men held in the Simferopol SIZO, charged with involvement in an organization which is legal in Ukraine and most countries.  They are treated like dangerous prisoners and held in filthy, overcrowded and ill-heated conditions.  Four other men, all Crimean Tatars from Sevastopol are in Rostov (Russia) awaiting the appeal due next week against real prison sentences on the same charges.  Their trial was so flawed that the judge, lacking the courage to simply acquit them, did the next best thing and passed the lowest sentences possible.

The authoritative Memorial Human Rights Centre has already declared the four  Sevastopol prisoners to be political prisoners, and it is only a question of time before the others are recognized as such.

The reasons are simple.

There is no evidence that the men are members of Hizb ut-Tahrir, the Islamist organization in question.

Russia’s Supreme Court declared it ‘terrorist’ in 2003, without explaining why during a secretive session.  The judgement was only made public long after it was too late to lodge an appeal.

The above reasons are why Memorial always declares men imprisoned on such charges to be political prisoners.

With respect to all Crimeans whom Russia is prosecuting on such charges, there is an additional reason.  Russia is an occupying state, with this occupation being part of what the International Criminal Court has accepted is an international military conflict.  An occupying state is subject to serious restrictions and cannot simply impose its own criminal legislation, deciding that what is legal in Ukraine should now be called ‘terrorism’.  That is thuggery, not law.