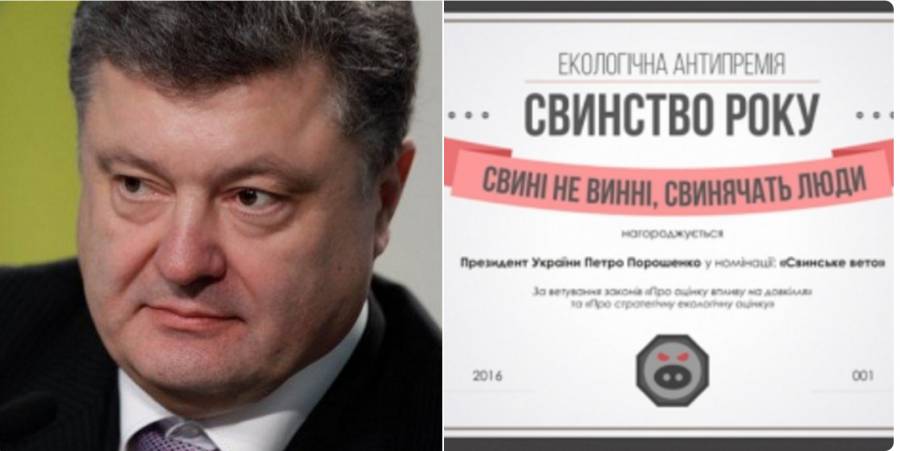 Ukrainian President Petro Poroshenko receives the first award for treacherous (‘swinish’) vetoing.  Two vetoes, to be precise, and of crucially important laws for Ukraine’s moves towards closer integration with the EU.  The two draft bills – ‘On environmental impact assessments’ and ‘On strategic environmental assessment’ – were drawn up by Ukrainian and European experts, together with the central authorities and some MPs.

The President’s Administration has not been ignored for their role in this disgrace.  In the category ‘collective swinish behaviour” they receive the anti-award for their unqualified advice on vetoing the laws.  In Ukrainian, the expression for doing something rotten or playing a bad trick on somebody is to “throw a pig in his way”.

The anti-awards and environmentalists’ disgust are because Poroshenko used his power of veto, returning the draft bills to the Verkhovna Rada.  According to the law, any such veto must provide suggestions as to what needs to be done.  In this case, and here the Administration are also to blame, there were some poorly formulated and vague proposals which could not be put to the vote”.

The bills, thus stymied, provide vital mechanisms for protecting the environment and their veto was a blow therefore both to the public, and to European partners who had hoped that Ukraine would finally introduce European standards on doing business with a responsible attitude to the environment.

The environmentalists warn that these vetoes, if a two-thirds majority cannot be reached to overcome them, drag Ukraine backwards, and are a seriously disturbing move away from implementation of international agreements as well as the EU-Ukraine Association Agreement.

The ‘Pigs without Rules’ anti-awards, received by the Ukrainian Agrarian Council; the Union of Poultry Farmers; the Pig Farmers Association and the Association of Milk Producers, are also linked to the vetoes.   All of these bodies lobbied for the vetoes and to block new environmental norms.  The old system without rules gives much more scope for personal gain.  The environmentalists stress that some of the members of these organizations are doing grave damage to the environment in how they dispose of waste products, etc.  They do indeed have a piggish attitude to other members of the community whom they are harming.

Destruction of the Tarutuni Steppe

Ukraine’s Defence Minister Stepan Poltorak gets the anti-award ‘Destroyer of nature legacy’ over the destruction in October 2016 of 1200 hectares of the Tarituni Steppe, an area of virgin soil with local reservation status.  The damage caused is estimated at 54 billion UAH.  The Defence Ministry which commissioned the destruction claims that they were reinstating a former military range, however the environmentalists are convinced that this is simply a corrupt method of using state property without paying any taxes, and not as the land is designated to be used.

Forest Destroyer of the Year

The dishonour this time goes to Khrystyna Yushkevych, Head of the State Forestry Agency for her lack of professionalism and blocking of reforms of the forestry industry.

The forestry head under Viktor Yanukovych  - Viktor Sivets – is currently facing criminal proceedings for raking of hundreds of millions of Euros from export of word.  The mechanisms for such corruption, the environmentalists say, are still working in the field.

Litterer of the Year

The Mayor of Lviv Andriy Sadovy gets this anti-award for the collapse of the situation with rubbish in the city.  The problem with disposal of solid waste has not been resolved for years, and waste is often dumped in places it shouldn’t be.

As is all too often the case, attention was given to the problem only after people died during a fire at the Hrybovytske rubbish dump.

Ihor Nasalyk, Ministry of Energy and the Coal Industry is slammed for his disastrous initiatives in hydroelectricity.  The plan drawn up until 2026 is expected by numerous experts to have catastrophic impact on the environment and could also lead to manmade disasters.  The plans would have a terrible impact on the water system, on nature reserves, and could also lead to the destruction of historical and cultural places of world, national or local significance.  There was no public discussion over a program with such enormous consequences and no environmental impact assessment.

*  The initiators of the anti-award were the National Ecological Centre of Ukraine; the NGO ’Environment, People, Law’, the Bureau of Environmental Investigations and ’Mama-86’