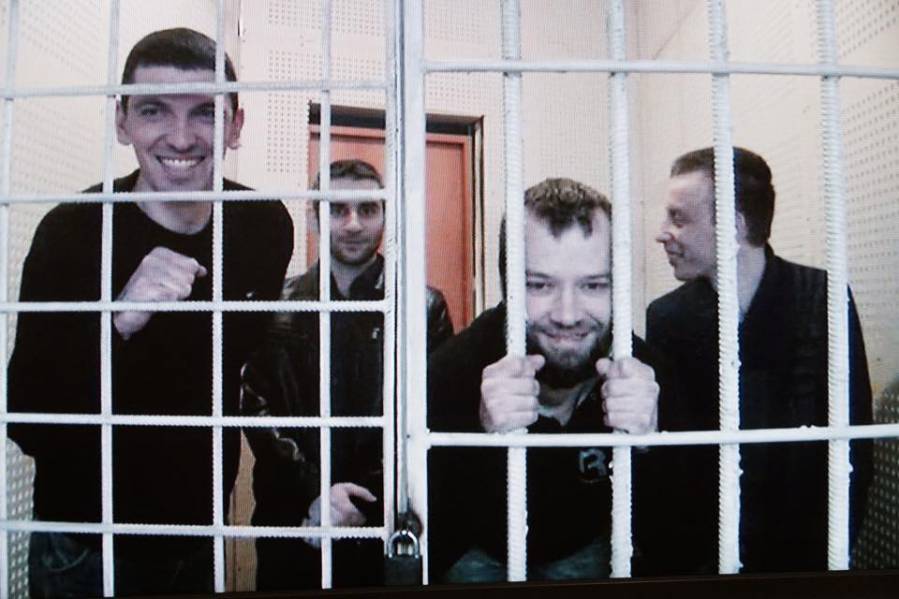 It is a terrible indictment of Russia’s justice system that the real prison sentences passed in September on four innocent Crimean Tatars should have been seen as something of a triumph, since they were less than the prosecution had demanded.  The triumph was short-lived.  On Dec 27, Russia’s Supreme Court allowed the prosecutor’s appeal against Ruslan Zeitullayev’s 7-year sentence (as opposed to the 17-year sentence demanded) and sent the ‘case’ for retrial.  The Court rejected the appeals brought by Ferat Saifullayev, Rustem Vaitov and Nuri Primov against their 5-year sentences.

In addition to the multiple reasons for questioning the charges and trial, the Supreme Court was also confronted with a ruling from the Rostov Military Court which is quite surreal, with most of the ‘evidence’ mentioned pre-dating Russia’s invasion and annexation of Crimea.  This is of critical importance given that all four men are charged with involvement in an organization that was and remains legal in Ukraine and most other countries.

Russia quite simply has no right to be prosecuting any Crimean for involvement in a legal Ukrainian organization.  Russia is recognized by the UN General Assembly, the Parliamentary Assembly of the Council of Europe, the International Criminal Court and other bodies to be an occupying power in Crimea, and as such must not impose its law on the peninsula.  It a recent report, Amnesty International pointed out that “putting defendants from Crimea on trial in a military court outside Crimea is a direct violation of the international humanitarian law governing occupation.”

These reasons were also stressed by the Memorial Human Rights Centre when it declared all four men political prisoners without awaiting the end of the trial, as it would normally do.

There are other issues. The Russian Supreme Court has never provided an adequate explanation for why, in 2003, it declared the peaceful pan-Islamist organization Hizb ut-Tahrir ‘terrorist’.  Members of the organization and human rights NGOs were not informed of the ruling until it was too late to lodge an appeal against a decision which has enabled conveyor belt prosecutions and huge sentences in Russia.

It is the lack of any evidence that the organization is ‘terrorist’ that makes Memorial HRC regularly recognize Russian citizens convicted merely of involvement in Hizb ut-Tahrir as political prisoners, although in this case they await the end of the trial.

There is no evidence that members of Hizb ut-Tahrir have ever committed any act of terrorism, or even of violence, anywhere in the world.

Three of the four Sevastopol men, all of whom have small children, have been in custody since January 2015, with Saifullayev arrested a little later, in April that year.  The prosecution claimed that Zeitullayev was the ‘organizer’ of a so-called terrorist group, and that the other three men had been members.

As mentioned, there was no ‘evidence’ of any of the men’s current membership of Hizb ut-Tahrir.  Most of the ‘witnesses’ brought in rejected testimony as not having been given, or given under duress.  There were two or three people, like a former SBU officer who switched sides after the invasion and is known to have had personal, and corrupt, reasons for a vendetta against Zeitullayev and Saifullayev.

The prosecution then used the testimony of a secret witness who spoke with long hesitation from a separate room with the breaks clearly being used for somebody to prompt him on what to answer.  Even then his answers were confused and contradictory.

There appears to have been one kind of ‘kitchen discussion’ on the level of what would, theoretically, be a good world order.

Hizb ut-Tahrir ‘cases’ in the Russian Federation are normally ‘easy’ with no serious defence, guaranteed convictions and almost equally certain promotion for the prosecutors and investigators involved.

That has not been the case in Russian-occupied Crimea where committed lawyers have properly defended the men and the clamps on freedom of speech have not prevented information being circulated about the total lack of any substance to the charges.

On September 7, the court in Rostov on the Don did something unusual.  It rejected the more serious charges of ‘organizing’ a Hizb ut-Tahrir unit in Zeitullayev’s case, and convicted him and the others merely of ‘involvement’.  All four men should have been acquitted, but that never happens, so the judges’ unwillingness to pass a 17-year sentence for nothing had seemed promising.

The fact that the Supreme Court showed no such modicum of integrity is especially disturbing since there are 15 other Crimean Muslims now in detention on similar charges.  That number is unfortunately likely to rise, especially given the repeated focus during the trial of the Sevastopol men on their attitude to Russian occupation of Crimea, and the fact that the charges in some cases, like those of Emir-Useyn Kuku and Muslim Aliev appear directly linked with their human rights activities and / or civic position.

Address (just copy-paste the address, with the name and year of birth of the person you are writing to).  Three of the men are likely to be moved, but this will hopefully not be for a few weeks.

The 15 Crimean Muslims held in custody in Russian-occupied Crimea