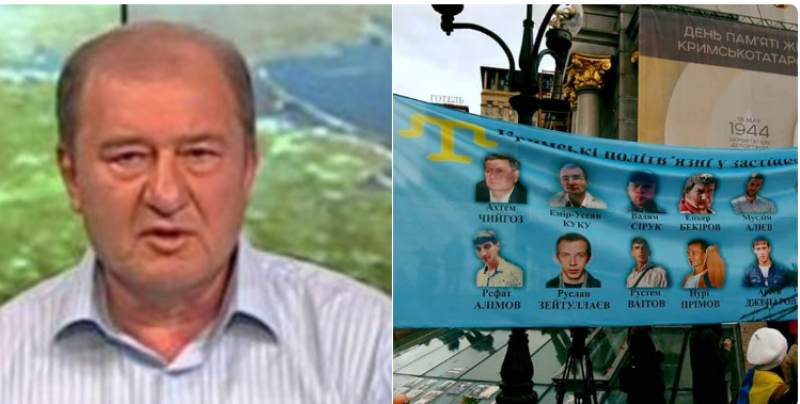 Russia has added Crimean Tatar Mejlis leader Ilmi Umerov to its notoriously long list of so-called ‘Terrorists and Extremists’ for saying, as do all democratic states, that Russia should be made to leave Crimea.  With its customary contempt for presumption of  innocence, it has also added all 19 Crimean Muslims whom it is holding in custody and charging with unproven involvement in an organization which is legal in Ukraine.

They join many other Ukrainian victims of Russian political persecution, including Ukrainian filmmaker Oleg Sentsov and civic activist Oleksandr Kolchenko who were labelled ‘terrorists’ almost a year before their ‘trial’.  Crimean journalist Mykola Semena who is, like Umerov, charged over comments indicating occupation to Russia’s occupation of Crimea, was added to the list many months ago.

Like Semena, 59-year-old Ilmi Umerov first learned of this new development because of the practical ramifications.  Umerov’s bank account is now blocked, and he is not even able to pay the fine illegally imposed for a meeting of the Mejlis.

Since Russia has now banned as ‘extremist’ the Crimean Tatar Mejlis, or representative assembly of the main indigenous people of Crimea, it is only a matter of time before new persecution of Mejlis members begins, with more people added to what is increasingly becoming a post-Soviet list of ‘dissidents’.  In further breach of fundamental principles of international law, incidentally, Russia is also treating Ukrainians from Crimea as Russian.

As reported, there are indications that the FSB are planning new charges against Umerov, also over statements indicating opposition to Russian occupation.  It is worth seeing what Russia calls ‘extremism’ in occupied Crimea.

Although formal charges have not yet been laid, there have been attempts to interrogate Umerov about a Skype interview he gave a Kyiv TV channel (17 Kanal) on Dec 12, 2015.  Umerov states that Crimea’s return to Ukraine cannot be achieved by military means since the peninsula is now so heavily militarized.  By now, he says, the amount of military equipment and weapons in Crimea has risen exponentially.  He believes that increased sanctions together with the falling price of oil and Russia’s mounting isolation will turn Crimea into an insurmountable burden for Russia.  He calls on Ukrainians to not give up on Crimea which is a part of Ukraine and worth struggling for.

Umerov was initially detained on May 12 and charged in connection with an interview given (in Crimean Tatar} to TV ATR  on March 19, 2016 in Kyiv.  In that interview he stated that Russia must be made to leave Crimea and Donbas, as do the UN General Assembly, the EU, the Parliamentary Assembly of the Council of Europe and most countries.  Russia has, quite incredibly, claimed that the interview contained “public calls to action aimed at violating Russia’s territorial integrity’. This is under Article 280.1, a new article introduced within months of Russia’s invasion and annexation of Crimea, carrying a sentence of up to 5 years’ imprisonment.

It is possible that Russia delayed inclusion of Umerov on this preposterous list because of the international protest after his forced hospitalization for a supposed ‘psychiatric assessment’.  Such use of punitive psychiatry was typical in Soviet times, and is now becoming common in Crimea under Russian occupation.

Outrage over Umerov’s incarceration was particularly vehement since the 59-year-old has several serious medical conditions.  Being unable to imprison him because of these, Russia effectively imprisoned him in a clinic where the conditions were also dangerous for his health.

Almost all of the 19 Crimean Muslims whom Russia is illegally imprisoning on unsubstantiated charges of belonging to an organization (Hizb ut-Tahrir) which is not banned in Ukraine have children.  They have suffered psychological trauma, and some, like the children of Crimean Tatar human rights activist Emir-Useyn Kuku have been harassed by the FSB and occupation authorities.  On top of this, the families are inevitably experiencing practical difficulties. Russia has now exacerbated these still further by labelling innocent men ‘terrorists’.