Trump is on collision course with international law over CrimeaTrump’s man in Moscow claims ‘misinformation’ about Crimea, Ukraine was ‘catastrophic’ & sanctions don’t workWhy a Trump Victory Would Put Ukraine in Danger. In Trump’s Own WordsMark it down, Mr Trump, Russia has already gone into UkraineNo surprises as Trump says he could recognize Crimea as ’Russian’ & lift sanctionsA British Foreign Secretary who excuses Russia’s invasion of Crimea?Kremlin’s Donbas proxies congratulate UK for ’doing what they did’ & voting for BrexitBrexit a gift to Putin, the far right & Trump, a blow to democracyEx-Mayor of London Boris Johnson blames Russia’s annexation of Crimea on the EUWhat European Values if Dutch Referendum Result Stands?Appeal by the leaders of Ukrainian national communities to the Dutch populationFormer Soviet political prisoners call on Holland to say yes to Ukraine’s European futurePlaying with fear and ignoranceHow a democratic tool became a threat to democracyUkrainian Jewish leaders appeal to Holland: Give our country the chance to break with the pastDutch referendum puts Ukraine in spotlightInternational NGOs should get the facts right re Ukraine’s ‘Ban’ on Russian TV DozhdInternational appeal: ‘Let’s not get into the wrong fight! We must support the Ukrainians without thinking twice or holding back’Mariupol Moses: A Man Who Took 117 People Out Of The Besieged City On FootRussia uses collaborators to ‘ask Putin’ for annexation of entire Kherson oblast
• Topics / Politics and human rights
• Topics / Human Rights Abuses in Russian-occupied Crimea 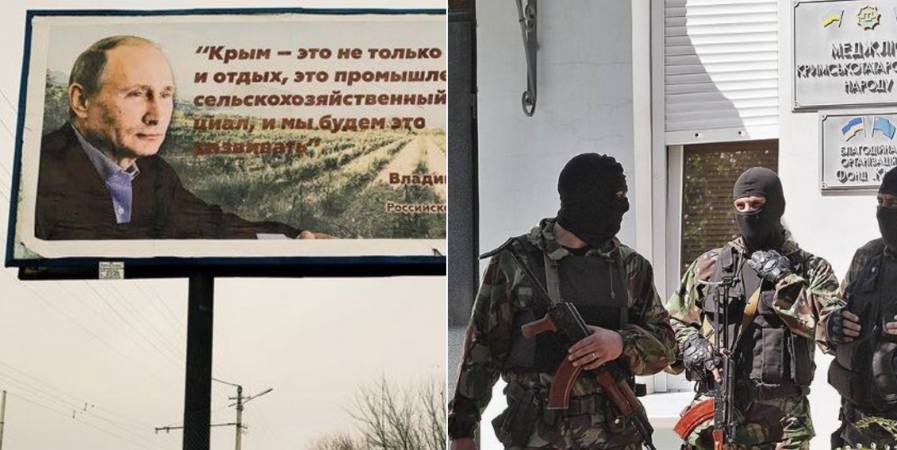 Hopes are high in Russia that its investment in the US elections will pay off in the removal of economic sanctions and acceptance of Russia’s illegal invasion and annexation of Crimea.  Since none of the conditions for waiving sanctions have been met, other methods to sell such an option are being applied.  They include pushing certain ‘messages’ about sanctions, such as the untrue claims by Trump man Carter Page that the West has suffered most from the sanctions and that sanctions ‘don’t work’.

Another major component lies in repeating certain myths about Crimea, in distorting information about how the Ukrainian territory came to be under Russian occupation and in presenting the Crimean population as fully in support of annexation.  The Kremlin is, of course, openly financing its own propaganda vehicles – RT (Russia Today) and Sputnik, however it prefers to encourage the publication of material in other media.  While it is likely that money does sometimes directly change hands, it is also probable that simply oiling the wheels for ‘exclusive’ material is sufficient.  Journalists visiting Crimea from Russia are almost certainly restricted as to who they see and who they don’t.

Kim Hjelmgaard, a Berlin-based journalist writing for USA Today, visited Russia soon after the US elections and Trump’s victory.  Judging by his Facebook page, he does not appear to know much, if any, Russian which would certainly make it easy to influence the impressions he received.  In St. Petersburg, for example, we are shown 3 young men, all speaking good English, expressing their hopes for a change in relations under Trump.

Then there is the Crimean article from Jan 4, 2017 Crimeans back Russian takeover: If they try to take it back, ‘I will fight’.

There is no mention of how Hjelmgaard came to be in Crimea, but he clearly entered illegally from Russia.  At the beginning, the reader is told only that “Russia reclaimed Crimea from Ukraine” and that almost three years later, “many in this rugged Black Sea peninsula seem pleased to be back in Russian arms”.

There is then a glowing report about supposedly improved roads, western goods available despite sanctions, etc.  This is followed by equally upbeat comments from two of the three people who voice their support, all seemingly from Sevastopol, a city which always had specific status and relations with Russia.  The choice of interviewees is, in any case, hardly representative.  The author speaks with a couple where the husband Alexander Nemenko is identified as “helping to design the Kerch Strait bridge”.  He is likely to be earning very well on the illegal construction of a bridge being built without proper environmental impact assessment and which experts warn would be dangerous.  There is also Sergei Sokolov, a friend of the family, who works for the Russian Navy.  Darya Nemenko, whose words are quoted in the title, claims that Crimea was always Russian and that she felt like a second-class citizen under Ukraine.  Her husband’s comments are reminiscent both of Soviet propaganda and of the kind of ‘Russian world’ philosophy pushed under Russian President Vladimir Putin: "We are one family, the Ukrainian and Russian people. There is no difference."

Hjelmgaard’s presentation of Crimean history clearly comes from Nemenko, and is equally contentious.   The author has also failed to do his homework and in places writes inaccurate nonsense. We are wrongly told, for example, that “in March 2014, Crimea was occupied by Russian security forces after a series of anti-corruption protests in Ukraine that began in 2004”.  The West “labelled’ Russia’s move an illegal annexation and Russia supposedly “responded by holding a referendum in Crimea in which more than 95% of voters officially backed rejoining Russia”.

Russian soldiers without insignia seized control of parliament, airports, etc. on Feb 27, 2014, and, at gunpoint, forced the ‘election’ of the people the Kremlin wanted in power.  These soldiers were backed by heavily armed paramilitaries who are known to have tortured people who tried only to protest against the invasion of their home, to have abducted and murdered some of them.  The paramilitaries were led by people like Russian former military intelligence officer Igor Girkin, who later went on to commit documented war crimes in Eastern Ukraine.  All of this violent takeover of another country’s territory was, in fact, witnessed at the time by foreign journalists, and it is disappointing that a USA Today journalist should simply repeat Russian propaganda, rather than checking his facts.

The same applies to the pseudo-referendum, announced on March 6 and held a mere 10 days later.  The status quo was not given as an option, and the event was ‘observed’ only by politicians from far-right and neo-Stalinist parties known for their unwavering pro-Kremlin position.  Even Putin’s own Human Rights Council has acknowledged that the results were falsified.  It estimates a turnout and vote that would indicate far less than half of the Crimean population.  It is certainly true that any such ‘referendum’ was in breach of Ukraine’s Constitution, however the author’s mention only of Ukraine’s objections to the event is misleading.  It was condemned by all democratic countries, and by all international and domestic election watchdogs as a farce.

The ‘buts’ come at the very end, with the author again not having done his homework even about Mykola Semena, the Crimean journalist facing a possible 5-year sentence for opposing Russia’s occupation of Crimea.

The one Crimean Tatar he spoke to wished to remain anonymous, but mentioned only having been visited by the Russian Security Service.

This is then acknowledged but essentially dismissed by the Nemenkos on whose militant and upbeat tone the text ends.

There is no mention of the tens of thousands of Ukrainians forced to leave Crimea, nor the disappearances and likely killings of activists and others.  There is no indication at all that at least 37 Ukrainian citizens are imprisoned either in Crimea or Russia for their views, their opposition to Russian occupation and / or their religion.  Since they include the highest-ranking leader of the Crimean Tatar Mejlis, or self-governing body, not banished from Crimea, and world-renowned Ukrainian filmmaker Oleg Sentsov, this is a grave omission.  There are many others.

Nobody is suggesting that the author’s conversations with three Crimeans who are delighted with Russian occupation should not be reported.  Their attitude and their interpretation of facts should, however, be checked.  This is hardly difficult given the number of hard-hitting resolutions adopted in 2016 by the UN General Assembly, the Parliamentary Assembly of the Council of Europe and others, as well as numerous reports from international human rights NGOs.

It was clear throughout Trump’s campaign and has been seen since in his choice of candidates for top posts and in the activities of some of his men that the new US administration would like to remove sanctions and, possibly, broker deals with Russia in which Russia’s occupation of Crimea is quietly accepted.

If Trump succeeds, it should not be because the media has abdicated its role of properly informing the American public and has instead fed them Russian propaganda.