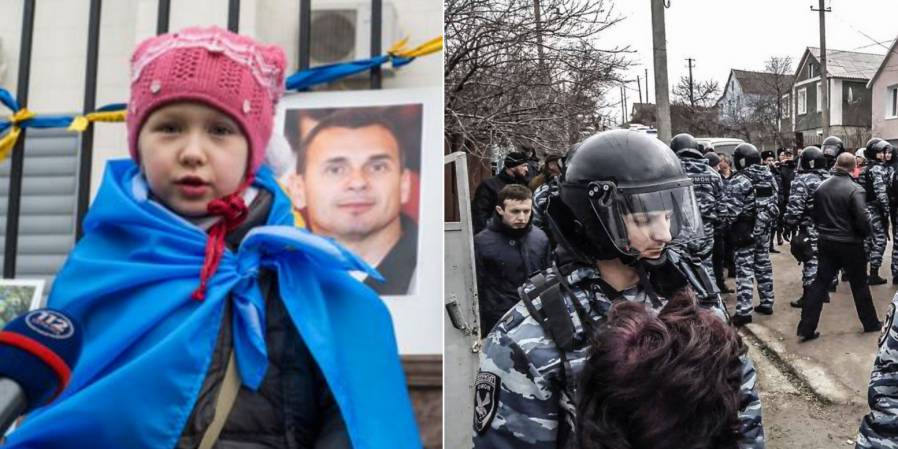 Donald Trump has on several occasions expressed admiration for Russian President Vladimir Putin even when reminded of the latter’s bloody track record. The position is baffling.  There is nothing ‘smart’ about repression and the fact that Russia is, in many cases, imprisoning Ukrainians on charges over which it can have no jurisdiction should act as a cold shower to any potential investors.  Given the will to appropriate somebody else’s property, obliging prosecutors and judges can be found to ensure the prosecution and sentence required.

It will soon be two years since Crimean Tatar leader Akhtem Chiygoz was arrested on surreal charges pertaining to a demonstration which took place before annexation, on Ukrainian territory and under Ukrainian legislation.  Two other Crimean Tatars – Ali Asanov and Mustafa Degermendzhy – have also been in custody for over 18 months over the same event.

The ‘case’ is in open violation of Russia’s own legislation.

Only Crimean Tatars are targeted although there were pro-Russian demonstrators present.

It remains unclear what the men are charged with, and all video footage is in their favour.

It is likely that the huge demonstration, organized by the Crimean Tatar Mejlis [representative assembly] on Feb 26, 2014 prevented Russia from ensuring a ‘change in Crimean status’ without the deployment of Russian soldiers.

Russia has since avenged itself against the Mejlis by banning veteran Crimean Tatar leader Mustafa Dzhemiliev and current Mejlis Head Refat Chubarov from their homeland; by imprisoning Chiygoz, the highest-ranking Melis leader after Chubarov and prosecuting another deputy leader Ilmi Umerov.  It has now even banned this self-governing body of the main indigenous people of Crimea and the repression can only gain in momentum.

Geography also no impediment in Russia’s revenge for Euromaidan

Russia has gone one step further in its trials of Oleksandr Kostenko and Andriy Kolomiyets.  Both men were convicted on absurd and unprovable charges linked with Euromaidan in Kyiv, well before annexation.  The men’s allegations of torture, backed in Kostenko’s case by his broken arm and other injuries, were ignored, as were the multiple irregularities.

International law is for others

Russia is recognized to be an occupying state by the UN General Assembly, by the International Criminal Court and most international bodies.  It is flagrantly violating fundamental obligations under international law over its treatment of .

19 Crimean Muslims are currently in custody in Russia or Crimea, charged with unproven involvement in an organization which is legal in Ukraine.

Russia has provided no evidence that the organization is ‘terrorist’, nor proof that the men are involved in it, yet four men have already been ‘convicted’.  The one glimmer of hope when the court balked at sentencing Ruslan Zeitullayev to 17 years’ imprisonment for nothing was quashed at appeal level.

At least one of the 19 men – Emir-Useyn Kuku is almost certainly imprisoned because of his human rights activities, and after an attempted abduction only turned into an FSB ‘search’ after Kuku’s cries for help attracted attention.

Crimean filmmaker Oleg Sentsov, civic activist Oleksandr Kolchenko and Oleksiy Chirniy have been imprisoned in Russia for almost 3 years after their arrest by the Russian FSB for a supposed ‘terrorist plot’.  The three men, and Gennady Afanasyev (since released) all peacefully opposed Russia’s occupation, and the case has been condemned as “ideologically motivated terror” against dissent.

There was literally nothing against Sentsov except the testimony of Chirniy and Afanasyev (now released).  There were no attempts to investigate Sentsov’s consistent allegations of torture, and Afanasyev’s courageous retraction of all testimony in court did not stop the judges from sentencing Sentsov to 20 years, Kolchenko to 10.  (more details here)

Two years later, in August 2016, the FSB came up with the first of two new ‘Crimean saboteur’ plots’.  There has been the same reliance on televised ‘confessions’ extracted through torture to compensate for the lack of any hard evidence that offences were either committed or even planned.  In the two, seemingly unrelated, ‘cases’, 10 men have so far been arrested, including two internationally respected academics.  Where the FSB’s attempts to totally deny the men access to lawyers have been thwarted, they have put other forms of pressure on the men.  There is, nonetheless, unequivocal testimony from Yevhen Panov and Andriy Zakhtei regarding torture applied, with this effectively confirmed in Panov’s case by the medical documentation finally obtained after the European Court of Human Rights intervened.   (more details here)

There is every reason to assume that the prosecution of Volodymyr Balukh is directly linked with his pro-Ukrainian position.

Russia does not always resort to fabricated prosecutions.  Crimean Tatar leader Mejlis Deputy Ilmi Umerov and Crimean journalist Mykola Semena are facing  5-year sentences for expressing the same position on Crimea as that taken by the UN General Assembly and all democratic countries.  Russia, however, is claiming that their expressions of opposition to occupation contains ‘public calls to action aimed at violating Russia’s territorial integrity’.

At least 15 Ukrainians, most Crimean Tatar and several of them civic activists, have disappeared without trace under Russian occupation.  The lack of any effort by the occupation authorities to find the men and especially strange behaviour following the abduction of Ervin Ibragimov, a member of the World Congress of Crimean Tatars are already highly disturbing.

What makes the situation even more chilling is the overlap between abductions and political persecution.  This is seen most vividly in the attempt to abduct Kuku, just over a year before Ibragimov was seized.  In Kuku’s case, the men clearly contacted the FSB when a crowd gathered.  The available CCTV footage shows Ibragimov’s assailants apparently wearing traffic police uniforms.

There is video footage clearly showing the so-called ‘self-defence’ armed paramilitaries who seized Reshat Ametov from his solitary protest against Russia’s invasion on March 3, 2014.  Although Ametov’s body was later found with horrific signs of torture, nobody has been held to answer.

There are grounds for suspecting that if anybody does get punished, it is the victim.  In March 2014, an attempt by the armed paramilitaries to seize Ukrainian activist Mykola Shyptur was noticed by a police officer.  This probably saved the 36-year-old’s life, however can hardly be called a ‘rescue’, since he ended up prosecuted, with one of his assailants treated as the supposed ‘victim’.  He is serving a long sentence which human rights activists consider to be politically motivated (more details here).

Many of the above-listed prosecutions result in promotion for the prosecutors involved, and they are essentially fail-proof, since the most any judges will do is reduce the sentence passed.  As seen in the case of Ruslan Zeitullayev, any such act of courage will still be revoked at appeal level.

Western countries need to be increasing pressure on Russia to stop such repressive ways, not giving them a carte blanche for more.