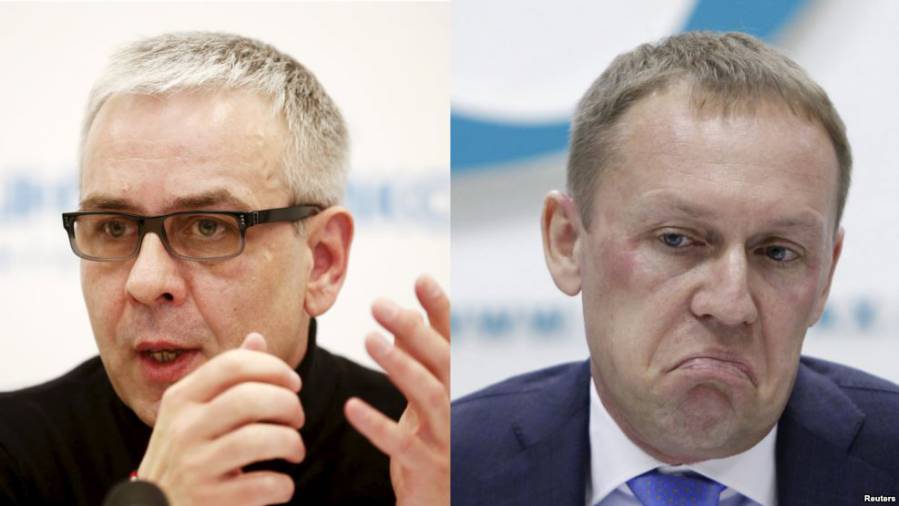 Andrei Lugovoi (right) has been accused by British investigators of carrying out the 2006 poisoning of Kremlin critic Aleksandr Litvinenko at a hotel in central London, with the help of Dmitry Kovtun (left).

The United States has slapped sanctions on five additional Russians for alleged human rights violations, including powerful senior law-enforcement official Aleksandr Bastrykin and lawmaker Andrei Lugovoi, who has been accused in Britain in the poisoning of Kremlin critic Aleksandr Litvinenko.

The Treasury Department on January 9 announced the financial sanctions and visa bans under a law punishing Russians that Washington deems complicit in the death of whistle-blowing Russian lawyer Sergei Magnitsky and other abuses.

Bastrykin and Lugovoi are the most prominent of the 44 Russians sanctioned to date under the Magnitsky Act, a 2012 U.S. law that has infuriated the Kremlin.

Bastrykin is the head of the federal Investigative Committee, the Russian analogue to the FBI that has directed numerous politically charged criminal cases against opponents of Russian President Vladimir Putin.

British investigators have accused Lugovoi, a member of Russia’s lower house of parliament, of carrying out the 2006 poisoning of Litvinenko at a hotel in central London.

Lugovoi’s alleged accomplice, Dmitry Kovtun, was also among those listed in the fresh round of Magnitsky-related sanctions.

British investigators have concluded that Litvinenko ingested the highly radioactive isotope polonium 210 while drinking tea in a luxury London hotel with Lugovoi and Kovtun.

Moscow has dismissed the inquiry as "opaque" and "politically motivated." Kovtun and Lugovoi, whom Russia refuses to extradite, have denied involvement despite traces of polonium that British investigators say the two left across London.

After the announcement of the new sanctions, Kovtun was quoted by Russia’s state-run TASS news agency as saying that he "never wanted to travel to the U.S., I’ve never had anything there, and I’ve never even been interested in going there."

There was no immediate comment from the Russian government.

Phone calls to the press office of the Russian Embassy in Washington went unanswered on January 9, and a spokesman there did not immediately respond to an e-mail seeking comment.

Trump says he wants to improve ties with Russia that have been badly strained by the conflicts in Ukraine and Syria, and by an alleged Russian effort to meddle in the U.S. presidential election.

He has previously said he would consider lifting U.S. sanctions targeting Russia over its 2014 annexation of Ukraine’s Crimean Peninsula, which he could do by executive order after taking office.

He has less flexibility with sanctions applied under the Magnitsky Act, which Obama signed into law after it passed in both houses of Congress with overwhelming bipartisan support.

The law gives him the authority to remove names from the Magnitsky-related sanctions list, though he would have to inform Congress of the justification for such a move, such as new evidence clearing the target of alleged rights abuses.

There was no immediate response from Russian officials to the new sanctions.

In the past, Moscow has retaliated tit-for-tat to Magnitsky Act sanctions, blacklisting U.S. officials it accuses of rights violations and abuses of power.

But Russian President Vladimir Putin has indicated he does not want to issue mirror responses to U.S. punitive measures prior to Trump’s presidency.

In what was widely seen as a gesture to the incoming president, Putin said last month that Russia would not expel any Americans following Obama’s expulsion of 35 Russian diplomats and announcement of new sanctions in response to an alleged Russian campaign -- including cyberattacks -- to influence the November 8 presidential election that Trump won.

Trump responded to those sanctions by saying that "it’s time for our country to move on to bigger and better things," and praised Putin as "very smart" for refraining from kicking Americans out of Russia in response.

Most of the Russians sanctioned under the Magnitsky Act so far are individuals Washington accuses of involvement in Magnitsky’s arrest and November 2009 death while in pretrial detention in Moscow.

Magnitsky’s friends and family say he was jailed, tortured, and denied medical treatment that could have saved his life as retribution for accusing law enforcement and tax officials of stealing $230 million from Russian coffers.

The law was the result of an aggressive lobbying push in Washington by Magnitsky’s employer, U.S.-born British investor Bill Browder.

In a January 9 tweet, Browder called the announcement of the new sanctions "great news."

Bastrykin was the head of the Investigative Committee -- then still formally a part of the Prosecutor-General’s Office -- when it charged Magnitsky with financial crimes that led to his jailing.

The other two Russians hit with the new Treasury sanctions are banker Gennady Plaksin and law enforcement official Stanislav Gordiyevsky, whom Magnitsky’s supporters accuse of involvement in the massive theft and the late auditor’s alleged persecution, respectively.

The Magnitsky Act has outraged the Kremlin ever since it was signed by Obama, whose administration at the time was seeking to "reset" relations with Moscow and initially opposed the legislation, saying existing mechanisms to punish rights abusers were sufficient.

Less than two weeks before Trump’s victory in the November 8 election, Putin signed a law codifying a laundry list of complaints against Washington.

The law withdrew Russia from a bilateral treaty to reduce weapons-grade plutonium stockpiles and listed the lifting of all U.S. sanctions and the repeal of the Magnitsky Act as preconditions for resumption of the accord.